How to Watch Upload Season 2 on Amazon Prime outside Canada 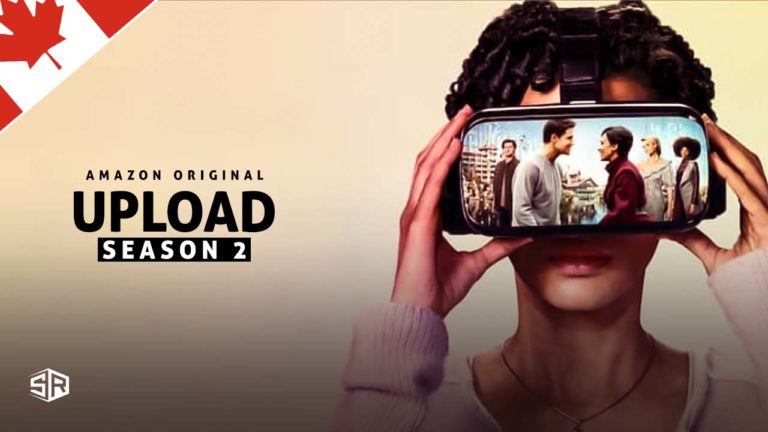 Upload, the super hit humorous sci-fi romantic of Prime Video, is returning with its much-awaited Season 2 on Amazon Prime on Friday, March 11.

If you are among the fanboys and girls of this romantic-comedy or possibly a murder mystery, and looking to watch Upload Season 2 on Amazon Prime outside Canada, this article will serve as your guide.

Upload is set in a parallel world where mere mortals are enabled to upload themselves into a parallel digital universe after they die and centers around the life after the death of a young programmer named Nathan (played by Robbie Amell).

Allegra Edwards, Andy Allo, Zainab Johnson, Josh Banday, and Kevin Bigley are also featured. Prime Video has already released a recap of season 1 ahead of the Season 2 premiere to set the exciting vibes for fans for its second season.

Fans will see Nathan in a stroppy situation in Upload Season 2 when his ex-girlfriend arrives in the afterlife and wants to mend their relationship. On the contrary, Nathan’s heart now beats for his spirit world handler, who has joined a secretive squad after she recognizes that what she believed she identified about the tech business may be anything but the truth.

There will be seven 30-minute episodes of Upload season 2. This fan-favorite TV series is created by Greg Daniels, who has other super-hit shows like Space Force and Parks and Recreation on his credits.

You can watch this series on Amazon Prime without any problem. However, in case you face geo-restrictions, you must use the best Amazon Prime VPNs to Upload Season 2.

Here’s everything you need to know about Upload season 2 including cast, trailer, release date, as well as how to watch it using a premium VPN.

Follow these steps to watch Upload Season 2 on Amazon Prime outside Canada:

Watch the Trailer of Upload Season 2

The most awaited season 2 official trailer of the comedy sci-fi series Upload, dropped on the Amazon Prime official YouTube channels of all regions at the same time and just a couple of weeks ago, on February 23, 2022.

Season 2 of the series was announced a long ago so the fans were waiting anxiously for the trailer of this quirky comedy show anxiously.

Watch the official trailer of the series here:

The tag line on the trailer reads: “Looks like Lakeview got a few upgrades this season.”

The trailer starts with a countdown and we see Ingrid who is facing some anger issues in the Upload and Nora is back at the Upload. She and Nathan are again having feelings for each other. Later on, a few of the upgrades that have been done in Upload are shown how things are changing and getting better but are they really?

The satirical comedy Upload Season 2 schedule on Amazon Prime is revealed after being in making for so long and delays caused by the pandemic.

The series will be hitting Amazon Prime on March 11, 2022. And good news for the fans is that all of the seven episodes for season 2 will be released together, so free your calendar to binge the series.

Each episode will be of thirty minutes. The popular fan-loved series Upload is created by Greg Daniels.

Amazon Prime is a geo-restricted platform and can only be accessed in some regions. This means you won’t be able to watch Upload Season 2 on Amazon Prime outside Canada. But hey, keep your spirits high as you can binge-watch all seven episodes of Upload’s second season with the help of a VPN.

However, if you are new to VPNs or you’ve heard about it but never used it, we are here to help you. If you, by any chance, have been using free VPNs, stop right there! You are potentially risking yourself for data breaches and hacking attacks.

Moreover, not all VPNs can bypass the geo-blocking and anti-VPN systems of streaming platforms like Prime Video.

Now, you must be thinking about which VPN you must get. We suggest you go through our shortlisted best VPNs to Watch Upload Season 2 on Amazon Prime outside Canada.

These VPNs have been taken through rigorous testing and proved to be capable enough to provide you speed, security, and most importantly to take you beyond the geo-restriction of Amazon Prime.

Based on its all-around performance, ExpressVPN is our recommended VPN to watch Upload Season 2 on Amazon Prime outside Canada. This VPN operates with more than 3000+ servers globally including 20+ server locations in Canada.

Based on our speed test on a 100 Mbps connection, these servers are capable of providing an impressive downloading speed of 88.78 Mbps and an uploading speed of 54.22 Mbps. You can use this VPN to watch Lov3 on Amazon Prime outside Canada.

You can get ExpressVPN for CA$ 8.53/mo (US$ 6.67/mo) - Save 49% and get 3 extra months FREE with 12-month plan with a one-month money-back offer. With this VPN you can also watch Lucy and Desi on Amazon Prime outside Canada.

Surfshark cares for low-budget cord-cutters and provides premium features with budget-friendly plans. This VPN is available for CA$ 3.18/mo (US$ 2.49/mo) - 81% Off on 2 Years Plan with a 30-day refund offer.

It allows you to use VPN features on unlimited devices per subscription making it the most affordable VPN to watch Upload Season 2 on Amazon Prime outside Canada.

This VPN operates with 3200+ servers located worldwide  including 600+ options in America.

These servers performed impressively on our 100 Mbps connection speed test and offered 86.51 Mbps downloading speed and 51.86 Mbps uploading speed. You can use this VPN to watch The Boys: Diabolical on Amazon Prime outside Canada.

Surfshark competes at par with competitors in terms of features and comes with dedicated apps for Windows, Linux, Android, Mac, iOS, smart technology, routers, streaming devices, and game consoles so that you can watch The Marvelous Mrs. Maisel Season 4 outside Canada on your preferred device.

NordVPN is another force to be reckoned with in the VPN market and is often commended for its unique features and mega network of servers. It is also convenient to use and can be termed as the most user-friendly VPN to watch Upload Season 2 on Amazon Prime outside Canada.

This VPN app can be used on Mac, iOS, Windows, Linux, Android, as well as gaming consoles, streaming devices, routers, and smart TVs. NordVPN is fully loaded with incredible features allowing you to watch Phat Tuesdays on Amazon Prime outside Canada.

NordVPN also offers the largest network of servers and operates with 5310+ servers including more than 1500 servers functional in Canada. On a 100 Mbps connection, NordVPN can reach up to 85.48 Mbps downloading speed and 48.42 Mbps uploading speed.

Dedicated IP, Browser Extensions, Double Protection, Camouflage Mode, Multi-factor Authentication, AES-256 Encryption, Threat Protection, Onion over IP, and Clean Web are some of the features given by this VPN, in addition, to Kill Switch and Split Tunneling.

Why Do You Need a VPN to Watch Amazon Prime outside Canada?

Even though Amazon Prime has a global reach and it offers a huge library of TV shows, movies, and documentaries, many of them are made exclusive to specific regions due to licensing agreements. This phenomenon is called geo-blocking or geo-restriction.

For example, if you try to reach Amazon Prime outside Canada, you will get the following error message on your screen:

If you are travelling abroad, or living outside Canada, and wish to watch the content available on Amazon Prime Canada, you will need a premium VPN app. Without a VPN you can’t watch anything offered outside your current region/ currently.

Premium VPN apps, like our recommended ExpressVPN, are purpose-built tech tools to provide you security and anonymity by spoofing your location.

For example, if you want to watch Upload Season 2 on Amazon Prime outside Canada, you can use ExpressVPN to get a disguised IP address located in Canada and your device’s location will appear within the territory of America. Consequently, you will be given access to all your favorite shows on Amazon Prime from outside Canada.

What is Upload Season 2 About?

Upload is a series that takes place in another world, where humans are uploaded and can upload themselves for a never-ending digital life after they die. The series story follows the afterlife of Nathan, a young computer programmer who dies in a car accident.

Upload Season two will be featuring Nathan who is now in an awkward situation as his ex has come back in his afterlife in Upload, Uploading herself to get back together with him. But unfortunately, he only has eyes now for the handler of his afterlife, who for some time disappeared from his life.

Nora joined an anti-tech underground rebel organization after she realizes that what she thought to know about this tech business may not be true and there are some hidden motives.

Season 2 is full of new future perceptions which also includes Lakeview’s most recent in-app digital baby program named, “prototypes,” as seen in the trailer as well as other ironic previews of the advances in technology along with the headaches that are yet to come.

Upload Season 2 Cast: Are Nora, Nathan, and Ingrid all Returning?

Yes, for the fans’ joy both Nathan and Nora are back for season 2 of the series, which is good because without both the characters there is no show.

“Nora and Nathan really get to grow together, and you’re getting to see these two people who exist in different worlds kind of come together, which I think is really cool,” said Andy Allo in an interview to The Hollywood Reporter.

The head of Amazon Studios’ Jennifer Salke also said: “We know our global fans want to see the next chapter with Nathan and Nora, so we are greenlighting season two.”

And there’s also Ingrid who is back and got uploaded so that she can be with Nathan forever. How the trio will handle things from there is yet to be seen in the series season 2. Along with the leading 3 roles, many of the previous and new characters will also be seen in season 2.

Where can I watch Upload Season 2?

This spring, fans of Greg Daniels’ comedy series The Office will be able to refill their Prime Video queues as the comedy series returns for Season 2 this spring. Upload season two, starring Robie Amell, Andy Allo, Zainab Johnson, and others, will release on Prime Video on Friday, March 11.

How can I watch Upload Season 2 on Amazon Prime outside Canada?

You can watch the Upload Season 2 on Amazon Prime outside Canada by subscribing and buying a package for streaming. For the viewers who cannot access Amazon Prime from their countries, connect to a VPN like our recommended ExpressVPN and start streaming.

What is the release date of Upload Season 2 on Amazon Prime?

The release date of the series Upload Season 2 on Amazon Prime is March 11, 2022.

After Upload season 1, fans were left on an outrageous cliffhanger season finale, many questions were hanging unrequited. Now midway March 2022, it’s only a matter of time before Upload fans can revisit Lakeview to witness the latest happening in a parallel digital world.

That’s all folks. We hope our guide on how to watch Upload Season 2 on Amazon Prime outside Canada will help you access the show. It is reiterated that a VPN is the only way you can watch this rom-com sci-fi thriller.

Get your hands on our recommended ExpressVPN and binge-watch all the seven episodes of Upload season 2.