How to Watch Minx on HBO Max in Canada 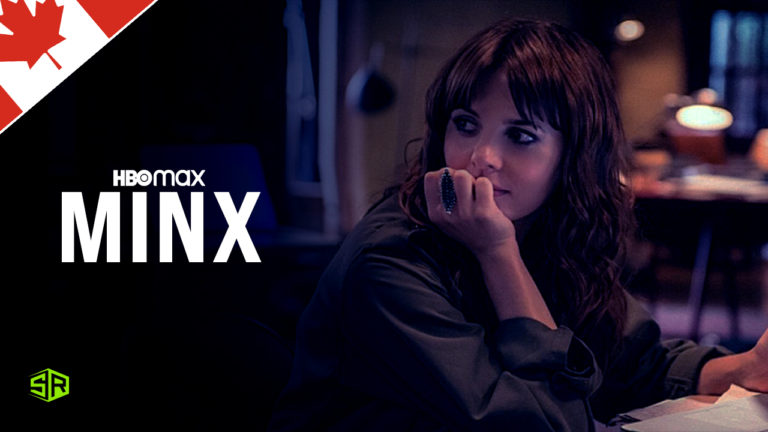 Brace yourself, HBO Max is all set to release its latest original comedy series, Minx, on March 17, 2022. If you are a comedy buff and looking for a way to watch Minx on HBO Max, you have come to the right article!

HBO Max has been building the hype around this series since February 2022, with new images released, giving the fans a sneak peek of what to expect from this sitcom. Morgan Peter Brown; actor and producer, took to his Twitter account and showed his excitement while announcing the release date of Minx:

So excited that #Minx is coming to @hbomax March 17th!

I’m thrilled to be a part of this series with an INCREDIBLE team behind it. @ellenrapoport @paulfeig Rachel Lee Goldenberg, Quyen Tran, Ophelia Lovibond, Jake Johnson & so many more.❤️

Ophelia Lovibond and Jake Johnson will feature in lead roles as Joyce and Doug; an unlikely duo planning to take the sex industry of Los Angeles by storm. Other notable stars included in the cast are Idara Victor, Lennon Parham, Jessica Lowe, Oscar Montoya, and Michael Angarano featuring as friends and possible colleagues of the two aspiring entrepreneurs. The series is created by Ellen Rapoport, who is known for her rom-com Netflix series Desperados.

Minx will consist of ten half-hour episodes and is set to land on HBO Max on Thursday, March 17, 2022, with two new episodes releasing each week till April 14, 2022. Good news for the subscribers of HBO Max but not for those who are currently living or planning to travel in Canada, as they will not be able to watch Minx on HBO Max in Canada due to geo-restrictions.

But you needn’t worry and continue reading this article as we will reveal everything you need to know including the details about this TV series and how to watch it from in Canada using a premium VPN.

How to Watch Minx on HBO Max in Canada [Quick Steps]

VPN apps are the most effective and workable solution to access geo-blocked streaming platforms like HBO Max. Here’s how to watch Minx on HBO Max in Canada using a VPN tool:

The latest comedy set in the golden period of the ’70s, an HBO Max original is hitting the platform very soon. The release date has been announced and the trailer was also released on the official HBO Max YouTube channel on March 4, 2022. The trailer shows the struggle of an editor who has a very unique and ahead of time idea for a magazine.

The trailer starts with the leading character Joyce going from one publisher to another, pitching her innovative idea for a women’s magazine. But none of them approve of her idea. While in her struggle to get a publisher she comes across a low-rent publisher, Doug.

The series will be released on March 17, 2022, with a pair of episodes of the series airing in five weeks’ time.

Best VPNs to Watch Minx on HBO Max in Canada

There’s no shortage of VPN apps on the internet and if you are a binge-watcher, you must have thought, at some point, about getting a VPN to fulfill your streaming needs. For a guaranteed unblocking of geo-restricted streaming platforms, you should only consider the premium VPNs.

Ordinary VPN apps often make your streaming experience awful due to their inability to provide fast streaming speed and bypass the geo-restrictions. It is reiterated not to waste your time and investment on free VPN apps or else you’ll cut a sorry figure.

So, to make your VPN hunt more convenient, we have tested a bunch of VPN apps and after taking them through the litmus test of speed, security, unlocking ability, network size, and other features. Based on our rigorous testing, we have then shortlisted the best HBO Max VPNs to watch Minx on HBO Max in Canada.

ExpressVPN is the top market player in the VPN industry due to its countless qualities that make your experience excellent. This VPN offers a vast global coverage of over 3000+ servers in 94+ countries including 20+ locations in the USA. With this VPN you can also watch Ruxx on HBO Max in Canada.

ExpressVPN has the ability to evade geo-restrictions of all the popular streaming platforms and is definitely the best VPN to Minx on HBO Max in Canada. This VPN can help you unblock geo-restricted content from HBO Max, Netflix, Amazon Prime, BBC iPlayer, Hulu, Disney Plus, Apple TV, Paramount+, Peacock, and several other names. It can also unlock Sling TV, Hulu + Live TV, YouTube TV, DirecTV, and Fubo TV.

ExpressVPN is powered by top-notch tech features and offers compatibility with Windows, Linux, Android, Mac, iOS, handheld devices, computers, streaming devices, gaming consoles, and routers. With a single account, you can set it up and use it on 5 different devices simultaneously.

Surfshark: Budget-Friendly VPN to Minx on HBO Max in Canada

Surfshark is known for its moderate pricing plan and the incredible features that come with it. It has to be one of the cheapest VPNs available right now. This app is available at a cost of CA$ 3.19/mo (US$ 2.49/mo) - 81% Off on 2 Years Plan with a one-month money-back guarantee.

The VPN offers download speeds of 87.18 Mbps and upload speeds of 52.13 Mbps over a 100 Mbps connection. With this VPN you can also watch The Tourist on HBO Max in Canada.

It offers unlimited multi-logins with a single subscription at such a modest price which makes it a pocket-friendly VPN to Minx on HBO Max in Canada.

This VPN has over 3200+ servers  spread over 65+ countries including hundreds of servers in the USA.

NordVPN is a perfect blend of fast speed and sturdy security at a reasonable price. At the moment it offers more than 5310+ servers in 94+ countries. With its 1500+ servers in the USA, you can easily bypass geo-restrictions of popular streaming sites including HBO Max, Amazon Prime, Netflix, Vudu, Disney Plus, Hulu, Disney+ Hotstar, Peacock, Paramount+ and others.

The VPN offers download speeds of 86.56 Mbps and upload speeds of 44.07 Mbps over a normal 100 Mbps connection. With this VPN you can also watch Bilardo on HBO Max in Canada without any buffer issues.

Not just that, it’s more than capable of unlocking FuboTV, Sling TV, YouTube TV, Hulu + Live TV, and DirecTV. NordVPN, without any doubt, is the largest server network VPN to Minx on HBO Max in Canada. This VPN also lets you watch Robot Chicken Season 11 on HBO Max in Canada.

NordVPN is a name of convenience and you can use it on macOS, iOS, Android, Windows, and Linux. You can use its SmartPlay feature to configure it on your gaming consoles, smart TVs, streaming devices, Wi-Fi routers, mobiles, and PCs. It can be used on 6 devices at a time with one account. This VPN has also introduced a new security feature called Threat Protection.

However, much like other streaming platforms, HBO Max remains a geo-restricted service. A VPN app is required to access HBO Max in Canada if it’s not available in your region. When you try to access this platform in a restricted region, you will get the following error message:

Not just that, even if HBO Max is available in your country, you will not get complete access to its content library due to licensing and copyright agreements. This limited access to viewers means that a huge amount of super-hit shows, films, and documentaries are only provided to HBO Max’s subscribers in the USA.

So, how do we access HBO Max from a restricted region? The answer is; through a VPN service. Online streaming platforms detect your location based on the IP address of your device and respond accordingly. That’s where a VPN comes into play.

To fool HBO Max into thinking that you are located in the USA, a VPN offers its expertise by masking your real IP address and spoofing your location. For instance, through our recommended ExpressVPN, you can connect to a remote server located in the USA and watch Minx on HBO Max in Canada.

Not only does it bypass geo-restrictions, but it also keeps your identity hidden on the internet and saves you from potential threats of hacking and data breaches.

Happening in the 1970s, Minx will be taking its audiences back to the sexy time when it was all about the short blouses and long bell-bottoms. The freshly released images of the series showcase the miscellaneous cast of the series appearing in the parties and meetings wearing infinite iconic 70s fashion.

The comedy series Minx follows the narrative of a young feminist woman who is looking out for a publisher to make the first magazine to empower women. Many of the top-tier publishers of the time either didn’t get her idea or don’t like it very much.

Minx has an impressive and talented cast which is as follow:

Where can I watch the Minx?

You can watch Minx on HBO Max in the USA. However, due to geo-restrictions, you will need a VPN app to access HBO Max from in Canada.

How many episodes of Minx?

The half-hour comedy “Minx” has been ordered to series on HBO Max. The streamer has ordered ten episodes of the program. Set in 1970s Los Angeles, “Minx” revolves around an aspiring young feminist (Ophelia Lovibond) who teams up with a low-rent publisher (Jake Johnson) to launch the first pornographic magazine for women.

When Can I watch Minx HBO Max series?

HBO Max TV series Minx will premiere on the streaming platform on March 17, 2022. You can watch it on HBO Max in Canada by subscribing to a VPN.

HBO Max is considered a home to super-hit sitcoms and this upcoming original comedy series from the streaming giant also seems to be living up to its hype. Minx centers on the character of a young lady aiming to produce the first erogenous magazine for women. Viewers must get ready to time travel back in the sexy era of peasant tops donned with bell-bottoms.

To summarize it all, Minx will be exclusively available on HBO Max and if comedy is your go-to genre then we suggest you shouldn’t miss out on this hilarious series by HBO Max. And for that matter, if you are currently living or traveling outside the vastness of the United States, you must get a subscription to a top-notch VPN app beforehand, preferably ExpressVPN, to watch Minx on HBO Max from in Canada.