The Best VPN For Streaming in Canada [August Updated] 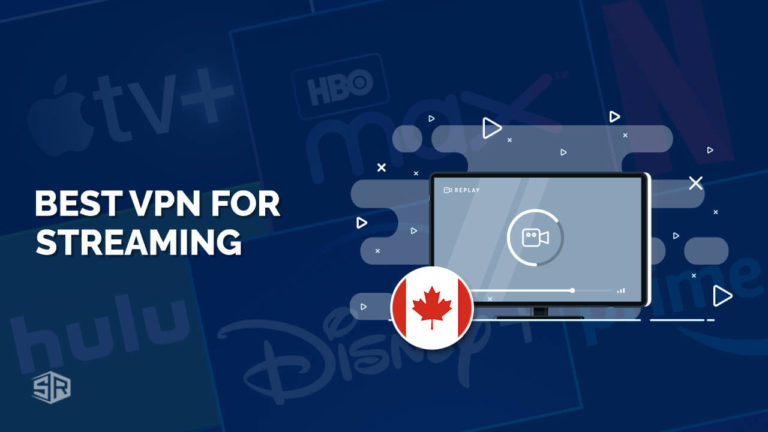 Finding the best VPN for streaming in Canada is complicated as many VPN providers compete to be on top. Unfortunately, the competition has given users many choices to choose from.

Streaming services are brilliant for watching and enjoying your favorite movies and shows. However, some services are region restricted and can only be accessed in some regions. The reason for all this is licensing rules.

But the good news is that you can easily bypass the geo-restrictions of streaming platforms using the best streaming VPN.

We have made the list of the best VPNs so that you don’t have to worry about which VPNs are best for streaming in Canada 2022!

After rigorous VPN services testing, the shortlisted VPNs are the most reliable VPNs. You can watch the content of any streaming platform using these VPN services.

You can watch your preferred movies and TV series from this streaming service by using one of the 5 best VPNs for streaming that we have compiled after extensive testing and comparisons:

How Do I Choose the Best VPN For Streaming in Canada?

The best VPN for streaming on the market combines lightning-fast connection speeds with impenetrable security. A fast and dependable connection is beneficial for steady streaming with no buffering. Also, many servers are often a big help when getting a solid connection.

Here are some features to consider when choosing the best VPN for streaming in 2022:

Which VPN is Best for Streaming in Canada [Full Analysis]

After extensive testing of 50+ VPNs, we have shortlisted 5 VPNs that are best in terms of speed, security, privacy, and server count.

These VPNs were tested to unblock 20+ international streaming platforms.

Here is the complete analysis of the best 5 VPNs for streaming:

ExpressVPN is the recommended VPN for streaming as it offers fast-speed servers and premium features.

ExpressVPN has an extensive network of VPN servers. This VPN has a network of 3000+ servers in 94+ countries and also a total of 25+ US locations. 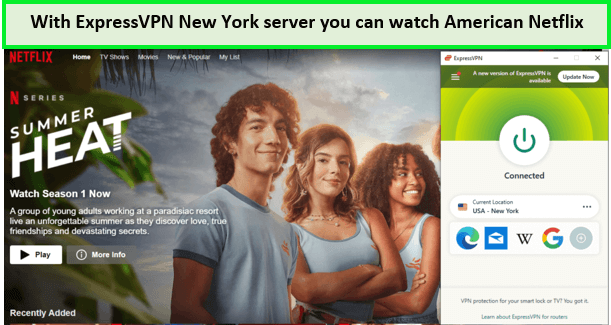 Get ExpressVPN for streaming to enjoy the unlimited content on Netflix.

In the speed tests we conducted, ExpressVPN offered a download speed of 87.18 Mbps and an upload speed of 52.13 Mbps on a 100 Mbps connection while streaming Netflix with ExpressVPN.

Here is the more detailed speed test result of ExpressVPN on various servers:

ExpressVPN offers excellent security features like 256-bit encryption and DNS leak protection and guarantees a no-log policy. In addition, ExpressVPN is the VPN for TV streaming, allowing you to watch Sling TV and YouTube TV in Canada.

You can use ExpressVPN on operating systems and devices like Windows, iOS, MAC, iPhone, Roku, Smart TV, etc.

Surfshark is budget-friendly for streaming as it costs only CA$ 2.94/mo (US$ 2.30/mo) - 82% Off on 2 Years Plan and offers unlimited multi-login through which you can support your entire office or home.

We used the Atlanta server and unblocked Netflix with Surfshark. We enjoyed the bufferless streaming with a VPN without any bandwidth drop. 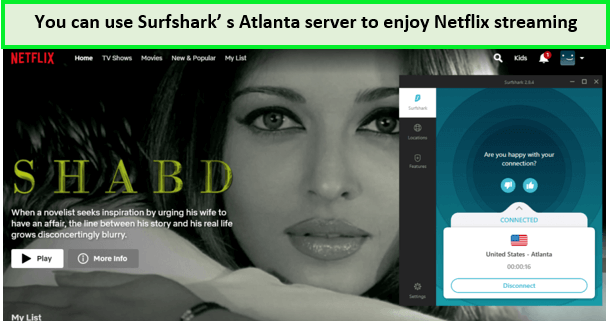 You can use Surfshark for streaming your favorite content on Netflix or any other streaming platform.

During the speed test on a 100 Mbps connection, Surfshark offered a download speed of 88.14 Mbps and an upload speed of 83.72 Mbps.

Here are the more detailed speed test data of Surfshark on various servers:

3. NordVPN – VPN With the Largest Server Network in Canada

NordVPN has the largest server network to watch any streaming platform. It has 5543+ servers in 94+ countries and 1970+ US servers in 15 locations.

We used the US server #9457 to unblock Netflix with NordVPN and enjoyed bufferless streaming. 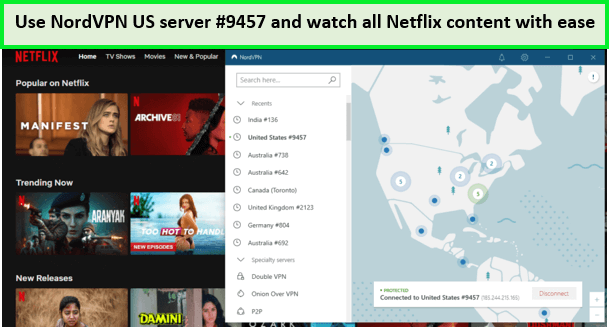 Get connected to the fastest US server of NordVPN and experience bufferless streaming.

NordVPN speed test results on a 100 Mbps connection indicate that it will not lower your internet speed.

Here are the more detailed speed test data of NordVPN on various servers:

When you connect to NordVPN, it automatically links you to the fastest server available in the location.

NordVPN offers 6 simultaneous connections. In addition, its Kill Switch feature turns the VPN into TOR in a single click.

It has amazing features like AES encryption, Thread Protection, and DNS leak protection. In addition, it guarantees a no-log policy.

You can use NordVPN on all major OS and devices like Windows, iOS, Mac OS, iOS, Smart TV, Apple TV, and Fire TV. Streaming with NordVPN also lets you watch Oxygen TV and ESPN+ in Canada.

CyberGhost is a unique VPN for streaming. It has a massive network of 7700+ servers in 90+ countries that will allow you to change your local IP address so that you can access geo-restricted content in your region.

We used the CyberGhost US server to access American Netflix and enjoyed our favorite content without any buffering. 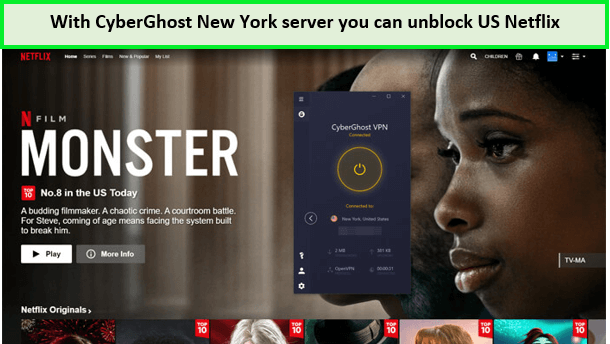 During the speed test, CyberGhost offered a download speed of 81.98 Mbps and an upload speed of 40.90 Mbps on a 100 Mbps connection.

Here are the more detailed speed test data of CyberGhost on various servers:

CyberGhost offers unique features like dedicated IP, 256-bit encryption, and Wi-Fi protection. You can use this VPN on 7 different devices.

CyberGhost is compatible with Android, MAC, iPhone, iOS, Windows, and other OS and devices.

Pros
Cons
Get CyberGhost for Streaming

5. IPVanish – VPN With Some Surprising Features

IPVanish has some surprising features for streaming. It has 1900+ servers in 60+ countries.

We used the US server to watch Peaky Blinders on Netflix. We enjoyed bufferless streaming. 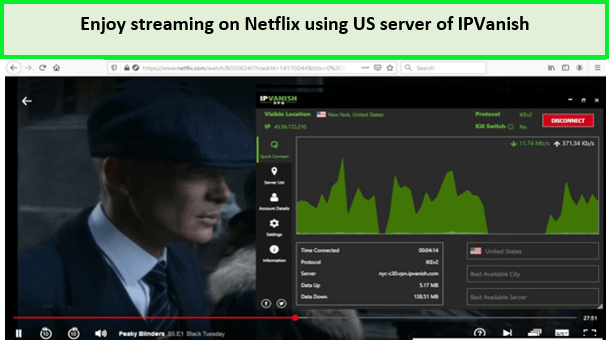 Watch your favorite shows on American Netflix using the US server of IPVanish.

Here are the more detailed speed test data of IPVanish on various servers:

IPVanish is one of the best options for streaming as AES 256-bit encryption is used on its servers, and IP and DNS leaks are not allowed.

You can use IPVanish on all mainstream devices and OS like Android, iPhone, Windows, PC, iOS, and many more. IPVanish support 10 simultaneous connections.

The cost of IPVanish is US$3.99/mo, and it comes with 30 day money-back guarantee.

Pros
Cons
Get IPVanish for Streaming

Why Do You Need a VPN for Streaming in Canada?

A VPN is needed for streaming because most streaming platforms are geo-restricted and can only be accessed in some regions.

If you try to access a geo-restricted streaming platform in your region, you will get an error message.

Disney Plus can only be accessed in some regions; thus, when we try to access it where it is not launched, we receive the following error message on the screen: 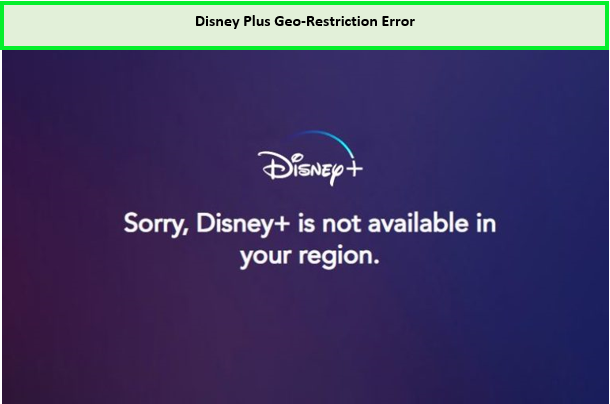 When you use a VPN, it hides your actual IP address so that you can trick the streaming service into thinking you are in one of the supported nations. You can use this to access all the content that isn’t available in your area.

So, with a VPN, you can easily access the content of Hulu, Disney Plus, HBO Max, and others without any geo-restriction.

A premium VPN like ExpressVPN guarantees that you stream without DNS or IP leaks and offers the best security and privacy features.

How to Access Different Streaming Services Using a VPN?

You must configure a VPN to access international streaming services or content. You can easily get around geo-restrictions and watch anything you want with the help of a VPN.

Once you’ve decided on a VPN, follow these instructions to utilize it from any location to access various streaming services:

Get ExpressVPN for StreamingThe Recommended VPN

Video Guide on Using A VPN For Streaming

Here is a short video guide on how you can use a VPN to unblock any geo-restricted streaming platform:

Which Streaming Services Can I Use With a VPN?

You can access a thousand streaming services and their content with the help of a VPN. Below are some top streaming platforms you can watch with a VPN.

What is the Most Unsafe VPN for Streaming?

The majority of VPNs are unreliable. They infect your device with malware and sell your information. As a result, the list of VPNs that are unsafe for streaming is provided below in case you’re wondering which ones you should avoid:

If your streaming VPN is not working, you can follow these quick fixes:

Each VPN is evaluated for streaming by our experts using a systematic testing process.

The following factors were considered during testing while selecting the best VPN for streaming movies and shows:

Here is a more detailed look at the factors that we considered while selecting the best VPN for streaming:

Do streaming services work with VPN in Canada?

Which VPN Is good for streaming in Canada?

We recommend ExpressVPN for streaming. It has servers in almost every country and offers unmatched content unblocking performance and excellent speed.

Yes, VPN is worth it for streaming. VPNs keep you safe and secure while enabling you to access everything the Internet offers. They are the perfect option whether you want to maximize the use of your streaming services or are concerned about your digital footprint. VPNs make accessing everything on the Internet simpler and safer.

Should I go for a free streaming VPN?

Yes, you can go for a free VPN, but you have to select the best free VPN for streaming that can give reliable security and performance; you’ll need to cut through the thick fog of the free VPN industry.

You can simply change your VPN server if your VPN has been blocked for streaming. Changing your VPN server might sometimes solve the problem and place you in completely other blocks of IP addresses.

Can I use a streaming VPN to watch sports in Canada?

Yes, you can stream sports using a VPN in canada. Sports lovers can watch any sport using VPN services to connect to many servers worldwide.

Is It Illegal to use a VPN for streaming in Canada?

No, it is not illegal to use a VPN for streaming in Canada. Using a VPN while streaming is completely legal in most nations, including the US and other western countries. Your internet connection and privacy are protected in this way.

Is ExpressVPN good for streaming?

Yes, ExpressVPN is good for streaming. You can access Netflix, Disney+, and any streaming platform with ExpressVPN. ExpressVPN continuously tracks the effectiveness of its servers in unblocking traffic, which is one of the reasons it is so dependable for accessing streaming websites.

Can You Use a VPN to Stream with Kodi?

Yes, you can use a VPN to stream with Kodi. Using Kodi with its official add-ons is entirely safe and legal. However, a VPN will enable you to access geographically restricted content and protect your data from outside parties and your internet service provider.

What VPN do streamers use?

Most streamers use ExpressVPN because of its high-speed servers, unblocking capabilities, and security.

Is streaming faster with VPN?

Yes, sometimes streaming can be faster with a VPN. Speed for some services can be increased via VPNs. ISPs occasionally throttle—or artificially slow down—certain types of traffic.

For instance, several large ISPs have throttled Netflix and other streaming entertainment providers; hence using a VPN can efficiently enhance the speed of your streaming service.

Which are the best TV streaming services in Canada?

Here are some of the best TV streaming services:

Only high-quality VPNs can bypass geo-restrictions and let you stream content from platforms such as Netflix Canada from any location. However, it can be challenging to choose the best VPN for streaming, but it won’t be with the help of the above guide.

Finally, you can stop worrying about finding the best VPN and start enjoying bufferless streaming by using a premium VPN service.