How to Watch The Dropout online on Hulu from Anywhere 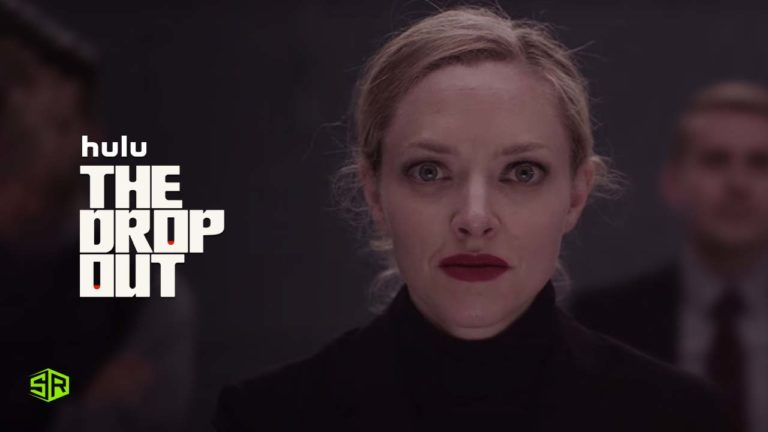 There’s no denying the hype going around Hulu’s upcoming original series, The Dropout. Hulu has a history of producing some intriguing and mind-boggling docuseries and this latest edition might well be one of those titles.

Here’s everything you need to know about the series and how you can watch The Dropout Online on Hulu from anywhere.

Greed. Lies. Manipulation. We’re just one month away from unraveling it all. Amanda Seyfried stars as notorious Silicon Valley CEO, Elizabeth Holmes, in #TheDropoutHulu. March 3, only on @hulu. pic.twitter.com/1bNBzW0koA

The Dropout is a miniseries based on a podcast of the same name hosted by Rebecca Jarvis. The TV series chronicles the life of a university dropout Elizabeth Holmes, who kickoff her tech start-up by named Theranos with the goal to revolutionize and modernize the healthcare industry.

The show’s lead role of Elizabeth Holmes is portrayed by Amanda Seyfried. Other notable cast members to join her include, Naveen Andrews who plays Sunny Balwani, along with William H. Macy as Richard Fuisz, Elizabeth Marvel as Noel Holmes, Kate Burton as Rochelle Gibbons. Laurie Metcalf as Phyllis Gardner, and Utkarsh Ambudkar as Rakesh Madhava.

The Dropout will land on Hulu in the first week of March and will be available for streaming. However, due to geo-restrictions, you will need a premium VPN to watch this series if you are currently outside the USA. Let’s reveal everything you need to know about The Dropout; the cast, release date, trailer, and how to watch Hulu outside USA.

With the VPNs being the only workable way, here’s how to watch The Dropout Online on Hulu from anywhere with a VPN:

The Dropout Premiere Date and Time

The premiere date of The Dropout on Hulu is March 3, 2022. The Elizabeth holmes mini-series on Hulu will make its debut with the first three episodes airing at 12:01 a.m. ET.

Hulu follows a familiar and interesting release schedule while releasing its original series. After dropping the first batch of three episodes on March 3, the next episodes will be released one by one on a weekly basis on Thursdays at 12:01 a.m. ET. Here is the complete schedule for The Dropout:

The trailer for The Dropout was released on February 07, 2022, on the official YouTube channel of Hulu. You can watch the trailer here:

The preview opens with Holmes, depicted by Seyfried as she experiences the roller-coaster of success and failure of her ill-fated company Theranos after dropping out of Stanford University. The trailer definitely had the viewers excited about the upcoming docuseries. It perfectly sums up the tale of wealth, romance, deception, and tragedy. Watch this story of high ambitions gone terribly wrong.

Best VPNs to Watch the Dropout Online on Hulu from Anywhere

There are plenty of options when you search for VPN apps on the internet. However, not all VPN apps have the ability to bypass the geo-restrictions and anti-VPN technology of Hulu and other streaming platforms alike.

If you need a bit of advice on which VPN is best to cater to your needs, after trying and testing a slew of VPN apps, we have made a list of the Best Hulu VPNs to watch the dropout mini-series.

Though we recommend ExpressVPN, let’s go through all of our picks:

ExpressVPN: Recommended VPN to Watch The Dropout Online on Hulu from Anywhere

This VPN pretty much justifies its status as the “No.1 Trusted Leader in VPN.” ExpressVPN is hands-down the best VPN to watch The Dropout online on Hulu due to its reliability and blistering speed. You can use this VPN to watch exclusive content like No Exit on Hulu from anywhere.

These servers are equipped with Trusted Server Technology and provide an impressive downloading speed of 88.78 Mbps and an uploading speed of 54.22 Mbps, on a 100 Mbps connection.

ExpressVPN provides an extensive network of 3000+ servers available in 94+ countries, including 20+ servers in the USA and you can easily unblock Hulu from anywhere.

ExpressVPN is providing a subscription plan for US$ 6.67/mo - Save 49% and get 3 extra months FREE with 12-month plan including a one-month money-back guarantee. You can use this app on 5 devices simultaneously.

Surfshark: Budget-Friendly VPN to Watch The Dropout Online on Hulu from Anywhere

Surfshark is the best option for those streaming junkies who are budget-conscious and want premium features at a lower price. It is definitely the most pocket-friendly VPN to watch The Dropout online on Hulu. With this affordable VPN, you can also watch Rick and Morty Season 5 on Hulu from anywhere.

Slow speed is the killer of online streaming and Surfshark makes sure that there is no lag. It provides a fast downloading speed of 86.51 Mbps and an uploading speed of 51.86 Mbps.

This app is available for just US$ 2.30/mo - 82% Off on 2 Years Plan. It also offers a 100% refund offer for 30 days, and you can use it on unlimited devices simultaneously with a single subscription.

Surfshark’s 3200+ servers spread all over 65+ countries including 600+ servers in the USA, which provide seamless streaming on Hulu outside the USA.

You can use this app on devices running on Windows, Mac, iOS, Android, Linux, as well as Game Consoles, Streaming Devices, Smart TVs, and Routers. You can use this VPN subscription to watch Mr.Queen on Hulu from anywhere without facing any buffering issues.

NordVPN is considered one of the best in the business. It is preferred by power users for its convenience, unique features, and huge network of servers. Most notably, it is the largest server network VPN to watch The Dropout online on Hulu. This VPN lets you watch amazing and new content like Better Things on Hulu from anywhere.

The gigantic network NordVPN consists of 5543+ servers stationed in 94+ countries and with 1970+ servers in the USA to provide hassle-free unlocking of Hulu’s geo-blocks.

NordVPN offers dedicated apps for Android, Linux, Windows, Mac, and iOS. You can also use it on routers, Game Consoles, Smart TVs, and Streaming Devices. This VPN has also introduced a new feature for security known as Threat Protection.

This VPN is currently available for US$ 3.49/mo - Save 60% on 2 Years Deal. It also provides a comprehensive one-month money-back guarantee.

What is ‘The Dropout’ About?

The Dropout is based on Rebeccas Jarvis’ podcast of the same name hosted on ABC. It covers the real-life story of Elizabeth Holmes and how her ambitious tech startup, Theranos, fell apart after a promising start. As stated by Hulu, the latest limited series tells the story of how the “world’s youngest self-made female billionaire loses it all in the blink of an eye.”

In the early 2000s, Holmes laid the foundation of her biotech enterprise, Theranos. Things escalated quickly for her and she became a tech star and a billionaire in no time. Fast forward to 2016, accusations of fraud started to surface against her, wiping away Holmes’ net worth.

It was as soon as January 2022, merely a month before the premiere of this series, Holmes was convicted of fraud and other felonies. As reported by The New York Times, Holmes, the founder of Theranos, was charged for three counts of wire fraud and one count of a plan to commit wire fraud. She has been sentenced to 20 years in prison for each charge.

How VPN Allows You to Access Hulu from Anywhere?

Hulu is a popular streaming platform based in the USA and only available to Native Americans. That means its content is geo-restricted and you can’t access it from outside the United States. If you attempt to access Hulu outside the USA or its territories, you are welcomed with the following error message:

Hulu and other famous streaming platforms place geo-restrictions on the content they offer due to licensing reasons and copyright laws. These platforms, including Hulu, detect your location through your IP address and instantly block your access request based on your whereabouts.

That’s where a premium VPN app, like our recommended ExpressVPN. VPNs are designed to provide you anonymity by concealing your location and real IP address.

Through a VPN, your internet traffic is rerouted through an intermediary server located in your desired region, in this case, the USA. This disguised IP address will trick Hulu into thinking that you are located in the United States and you will get access to your Hulu account without any problem.

Hulu only processes the payments from financial services working in the USA. So how do we create a Hulu account from outside the States? The two workable methods are as follows:

PayPal or a Virtual Credit Card can do the trick for you if you are living outside the USA and want to create a Hulu account. Follow these steps:

If you feel method 1 is a bit tricky, you can instead go for the Hulu Gift Card method. The steps you need to follow are:

Who Stars in The Dropout?

Is The Dropout a true story?

Yes, The Dropout is based on a real story of a Stanford University dropout, Elizabeth Holmes, who founded the now-defunct business, Theranos. Holmes was recently convicted of fraud and now faces up to 20 years in prison.

Is The Dropout on Hulu yet?

No, The Dropout hasn’t landed on Hulu as yet. The mini-series premiered on Hulu on March 3, 2022.

Who will play Elizabeth Holmes?

Elizabeth Holmes, the company’s CEO. Amanda Seyfried will play Holmes, who co-founded the Menlo Park blood-testing firm and is now a convicted felon in competing plays. “The Dropout,” a seven-episode miniseries starring Seyfried, launched on Hulu on March 3.

How can I watch The Dropout documentary?

The Dropout documentary is  available on Hulu, which is a geo-restricted platform. To watch this miniseries, you will need to use a VPN app to change your region to the USA.

The latest American TV series is all set to bring an intriguing story of Elizabeth Holmes to our screens through Hulu’s The Dropout. The story was first highlighted in the mainstream during 2015 when an exposé by the Wall Street Journal was published on the alleged fraudulent dealings of Holmes and her now-defunct enterprise Theranos.

Don’t miss out on this Hulu original series if you love watching stories about real-life events. You can The Dropout online on Hulu using a VPN app. So what are you waiting for? Bring home ExpressVPN today and start streaming your favorite content.