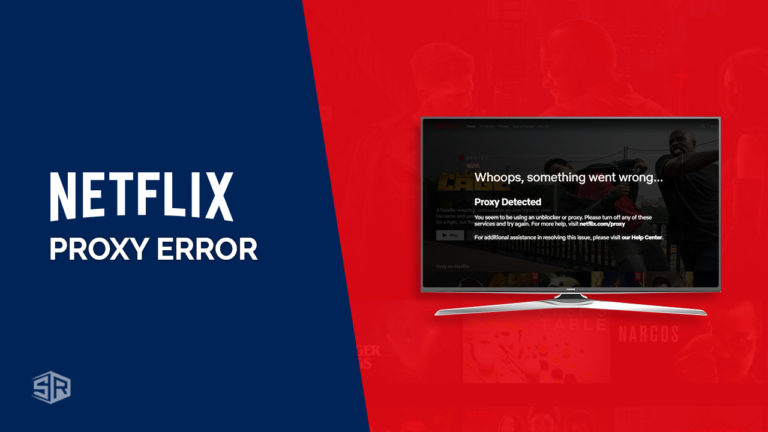 How frustrating is it when — you’re prepared to watch your most-awaited movie like Run, After We Collided or show on Netflix like Yu-Gi-Oh! on Netflix, Supernatural with the best snacks and your favorite person — and instead of seamlessly playing the title as you excitedly switch on your device, you see an error code on your screen?

What is Netflix Proxy Error?

Netflix Proxy Error happens when Netflix detects that you are using a VPN or maybe another type of proxy to access the streaming platform from a restricted location.

So, whether you’re using a VPN to access Netflix’s US library, or you’re trying to watch your country’s Netflix library while visiting abroad, you could run into this issue:

“Whoops, something went wrong. Streaming error. You seem to be using an unblocker or proxy. Please turn off any of these services and try again.”

Netflix error code: nw-2-5 is a network connection error that results in a warning by Netflix. This error prevents you from connecting to Netflix from the device. It is mostly experienced by Smart TV, PS4, and Xbox users.

There are two leading causes of nw-2-5 Netflix error.

If the users are getting this error on PS4, it indicates an issue with DNS configuration or internet connection.

Netflix error code: m7111-5059 is an indication that you are masking your IP address with a VPN, but the VPN is not doing its job correctly.

m7111-5059 Netflix is caused by using a proxy to change your location. In an attempt to access Netflix regions – many users resort to utilizing the services provided by a free VPN. As the free VPN servers are not updated regularly, they are easily detected by Netflix, and users get the proxy error warning.

Netflix Error M7111-5059 indicates that a user has been detected using a proxy setting to access Netflix libraries. The term proxy includes unblockers, VPN, or a proxy setting. It attempts to discourage the users from accessing the content not available for streaming in their region.

There are four fundamental causes of Netflix error code: M7361-1253, which are listed as follows.

Commonly faced by Chrome users and can be fixed by disabling the browser extensions.

Caused by visiting the bookmarked page – it can be fixed by typing the URL.

This error can usually be fixed by clearing your browser’s cache.

However, when all you want is to watch Netflix and an annoying Netflix error code like the Netflix Proxy Error appears on the screen, you’re more interested in the solution than in the details of the problem.

So, let us first look at the best VPNs that can take care of any Netflix error code and ensure a seamless streaming experience.

Try accessing Netflix’s geo-restricted content. It should now be available!

Why Does Netflix Ban Proxies?

When Netflix went global a couple years back, it didn’t have all the licensing rights necessary to stream all of the same TV series and movies to every country. Even before the worldwide rollout, users connected to Virtual Private Networks and other types of proxies to access other countries’ Netflix libraries. The US Netflix library is particularly popular due to its larger and generally newer catalog of TV shows.

A proxy service acts as a middleman between your device and Netflix. Instead of communicating directly with Netflix, internet data is first routed through the proxy server. To Netflix and other websites and apps, it appears as though the user is connecting from the proxy server’s location instead of their own. If the user is in Canada and wants access to US Netflix, for example, they can connect to a proxy server in the USA. In simplest terms, VPNs work the same way but usually encrypt data in transit.

Netflix started blocking connections from all proxies and VPNs in early 2016 to enforce its copyright obligations.

Now that you know how to use a VPN to bypass the annoying Netflix error code, let us take you to the list of the 3 best VPNs for the task.

After rigorous testing, our team has shortlisted the following best VPNs to solve Netflix Proxy Error:

ExpressVPN is excellent for avoiding the Netflix Proxy Error, and we recommend it because it is also the fastest Netflix VPN.

Watch this easy video to learn how to unblock Netflix using ExpressVPN:

There’s also a built-in speed test in the application. We measured speeds of 49.26 Mbps on avg while testing. Because streaming in HD simply requires 5 Mbps, this is more than strong enough for you to watch shows without interruptions.

It has approximately 3,000 servers in 94 different countries across the world; the super-fast servers and no bandwidth restriction ensure that you will not encounter any latency when watching Netflix.

As a consequence, you have a wide range of possibilities for IP addresses and accessing international Netflix libraries, as well as other region-restricted streaming services such as Hulu, BBC iPlayer, and Amazon Prime Video.

Your ExpressVPN membership also includes MediaStreamer, a Smart Domain Naming System (DNS) function. This allows you to view Netflix on systems that do not typically support VPNs.

With a 30-days money-back guarantee, you can buy ExpressVPN with the assurance that if you’re not satisfied with the service, you can get a full refund.

It is also accessible on the following devices:

Watch this easy video to learn how to unblock Netflix using Surfshark:

While this VPN does not have as many servers as the others on our list, it does provide you access to some of the most trending Netflix libraries including Netflix US.

Surfshark has lately more than quadrupled its server count, giving it a more competitive option. Surfshark is ideal for streaming Netflix, HBO Go, Amazon Video, and BBC iPlayer. It also boasts fast and consistent speeds that can handle HD material.

Surfshark secures your network traffic with 256-bit encryption and protects against leaks. It also has a switch kill feature to ensure that your data is never compromised. It also has a strict no-logs policy, that ensures no one can ever see what you’re doing.

It is also accessible on the following devices:

Watch this easy video to learn how to unblock Netflix using NordVPN:

You will not only have a large number of IP addresses to choose from, but you will also have numerous options for changing your Netflix region. NordVPN’s connection is fast and dependable, allowing you to stream HD material without Buffering.

There are no data or bandwidth limitations with NordVPN, so you can watch as much stuff as you want without worrying about running out of space.

Aside from that, NordVPN safeguards your data using 256-bit AES encryption and DNS leak prevention. Even if your VPN connection is lost, it provides an auto kill switch to ensure that all information is never compromised.

NordVPN also boasts a strong no-logs policy, which means that it does not log your internet activity.

It is also accessible on the following Devices:

Can a free VPN unblock the Netflix library of other countries?

A free VPN is not a good choice for watching any type of online video content for a number of reasons:

It’s quite likely that a free VPN won’t let you access region restricted content: Netflix and other streaming services are getting better at blocking VPNs from their servers. So much so that many paid VPN providers have given up on offering reliable access to Netflix. Therefore, it’s even more unlikely that a free VPN provider will have the resources to avoid being blocked.

It probably won’t protect your online anonymity: Free VPNs often come with a hidden cost to your online privacy. A lot of them will recoup costs by logging your online activity and selling your information on to third parties. Alternatively, you may find that your free VPN provider will inject ads and track cookies while you’re online.

So, while it is technically possible to find a free VPN for the job, here are some paid VPNs that will definitely unblock Netflix.

No, using a free VPN to unblock Netflix or fix any kind of Netflix Proxy Errors is not recommended by experts. To begin, free VPNs have a very limited server pool, and the majority of them are already taken by Netflix bots.

The right VPN will allow you to connect to your favorite Netflix collection in a couple of seconds. Due to licenses and distribution constraints, Netflix appears differently in different countries.

As a result, we recommend you use ExpressVPN.

List of VPNs that do not work with Netflix

Here is the list of VPN services that do not work with Netflix or fail to bypass Netflix Proxy Error:

How Does Netflix Proxy Error Work?

Netflix does not openly reveal how the VPN restriction and Netflix Proxy Error operate, but we can deduce these few things based on our rigorous testing:

Most reputable VPN providers choose Domain Name System data with everything else through their servers, however, the Netflix iOS and Android applications exacerbate the problem by uppermost these Domain Name System settings. However, because the website version that you visit in a web browser does not do this, deactivating Netflix in a web browser is usually easier than on mobile applications.

Every internet-connected device is granted a unique bunch of letters and decimals known as an IP address. On the internet, public IP addresses are visible and belong to certain nations. When you connect to a VPN or proxy service, the IP Address of your device is hidden by the proxy server.

Most proxy and VPN server IP addresses are blacklisted by Netflix. We think Netflix just bans broad ranges of non-residential IP addresses rather than filtering out specific servers. Netflix is aware that the majority of proxy servers are located in data centres, which use different IP address ranges than home networks.


Why does Netflix say I’m using a proxy?

It happens when you try to access other region libraries, e.g., trying to access U.S. Netflix from the U.K. via a VPN or proxy server. However, with the best VPNs for Netflix, such as ExpressVPN, you can easily bypass the Netflix proxy error.

Is there a way to get around Netflix proxy blocking?

Yes, only a reliable and Premium VPN like ExpressVPN can help you get past any sort of Netflix proxy blocking or any sort. Free or VPNs with a low server count will be bound to get blocked by Netflix which has a strong radar in terms if detecting proxies.

If I keep using a VPN or Proxy, will Netflix ban me?

No, Netflix does not ban you if you keep using a VPN. But keep in mind that accessing different region libraries is against the Netflix terms and conditions. This means Netflix has all the rights to block your access when you try to unblock other Netflix countries’ libraries. However, as of now, there is no evidence that Netflix bans users who are using a VPN. The worst-case scenario is that an IP address gets blocked. In this case, you’ll need to connect to another VPN server for a different IP address.

How do I fix Netflix Proxy error?

To fix the Netflix proxy error, you need a top-notch premium quality VPN like ExpressVPN and NordVPN. Just get the subscription of any of the mentioned VPN and easily unblock Netflix without getting any proxy or unblocker error.

You are now aware of the different types of Netflix Error Codes along with the how’s and why’s behind them. Thankfully, you now also know that all of them can be quickly fixed with the use of a premium VPN.