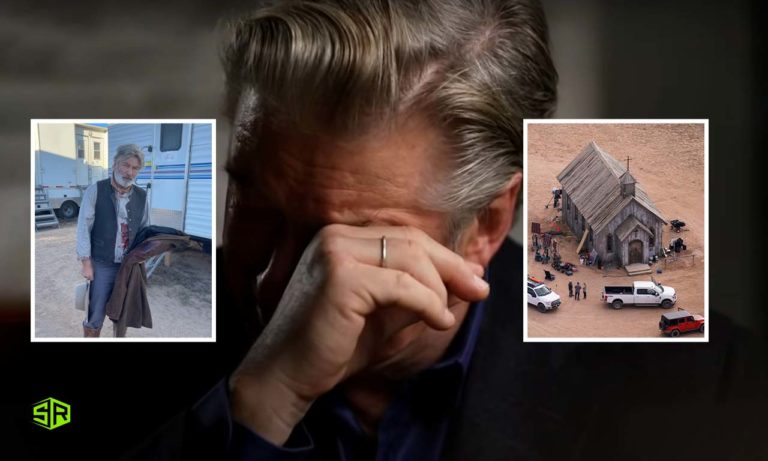 In a sneak peek at the actor’s first on-camera interview since the tragedy, Baldwin claims he did not fire the gun that murdered Halyna Hutchins.

Alec Baldwin’s mental state has been hinted at by the interviewer who sat down with him for the first time since the Rust shoot.

During an interview with Good Morning America, the interviewer shared his own thoughts on the shooting.

Alec Baldwin claims that he did not pull the trigger on the gun that killed cinematographer Halyna Hutchins on the set of Rust in October.

When the gun Baldwin was holding went off during rehearsals for the western on a ranch outside of Santa Fe, New Mexico, Hutchins, 42, was killed, and director Joel Souza, 48, was injured – a rare filming fatality that shocked Hollywood and forced a reckoning on the use of weapons on set and cutting corners on production safety.

Baldwin says. Stephanopoulos confirms, “So you never pulled the trigger?” to which Baldwin answers, “No, no, no, no. I would never point a gun at anyone and pull a trigger at them. Never.”

In an appearance on Good Morning America on Wednesday morning, Stephanopoulos called the 80-minute interview “raw” and “intense”.

Baldwin, 63, was described by the journalist as  “devastated” yet “very candid” and “forthcoming”. The actor “answered every question” and talked about Hutchins, meeting her family, and his account of what happened on set that day.

“I have to tell you, I was surprised in many places over the course of that hour and 20 minutes we sat down yesterday,” Stephanopoulos said.

“I’ve done thousands of interviews in the last 20 years at ABC,” he said. “This was the most intense I’ve ever experienced.”

The Sante Fe County Sheriff’s Office is investigating the shooting, with a particular focus on how live rounds, which are prohibited on set, came to be in the gun held by Baldwin.

Baldwin, according to sources, thought the gun was empty. Assistant director Dave Halls allegedly handed him the pistol and said “cold gun” as he handed it over. Hannah Gutierrez Reed, a 24-year-old head armourer balancing her second feature film role handling weapons with her job as a props assistant, was in charge of weapons on set, including the gun delivered to Hall.

Baldwin said he had “no idea” how a live bullet got into the gun, which was supposed to be loaded with blanks or dummy rounds.

Baldwin also stated to Stephanopoulos that the unintentional shooting was the worst thing that had ever happened to him: “Yep … yeah because I think back and I think of ‘what could I have done?'”

On Thursday morning, an attorney for Halls told ABC News that her client believes Baldwin did not pull the trigger and that the event was a “misfire.”

EXCLUSIVE: The owner of a prop arsenal that provided guns and ammunition to the “Rust” movie set speaks out. @KayleeHartung reports. https://t.co/QRWfr3VCVd pic.twitter.com/w8F4MnH3xi

“The entire time Baldwin had his finger outside the trigger guard, parallel to the barrel,” Halls’s attorney, Lisa Torraco, told Good Morning America’s Kaylee Hartung. “[Halls] told me since day one he thought it was a misfire.”

Halls told detectives he had no idea there were live bullets in the Colt.45 revolver before he gave it to Baldwin, according to an affidavit for a search warrant issued by the sheriff’s office on October 22.

Gutierrez Reed’s attorney said a week after the incident that the armourer had “no idea” how live rounds were up on the set and accused producers of creating an “unsafe” environment.

Alec Baldwin Unscripted will air on ABC in the United States on Thursday at 8 p.m. ET, and will be available on Hulu from December 11.

How to Watch Alec Baldwin’s Rust Interview Live From Anywhere

On Tuesday, the 37-year-old, who has six children with Alec, wrote on Instagram about how ‘heartbreaking’ the whole situation has been for her family.

“I’ve had to have some conversations, explaining recent events to my oldest children recently. You can imagine how heart-wrenching it has been,” she said.

She went on to recount, “Sometimes, I just freeze, knowing I’m the adult who must guide my family, but so lost as to what the right direction is. There is no manual we are provided.”

Hilaria, a yoga instructor, also admitted that she is occasionally surprised to find herself in the ‘adult position.’

“I’m like, ‘Shouldn’t I know what to do?’ You have no idea how much all of your kindness, love and support mean. Yes, you who are reading this. I know how lucky I am to have you,” she said.

Injuries and tragedies during the shoots are common. According to Wikipedia, while filming a fight scene of the movie Love You Racchu in Jogenahalli near Bidadi, Karnataka, stuntman Vivek stepped on an electric wire and died on the spot.

According to another Wikipedia news In July 2019, stuntman Joe Watts, who doubled for Vin Diesel, sustained a serious head injury after a major fall during filming at the Warner Bros.

The production should take the necessary steps to make sure no other tragedy or serious injury should occur to any cast or crew member.