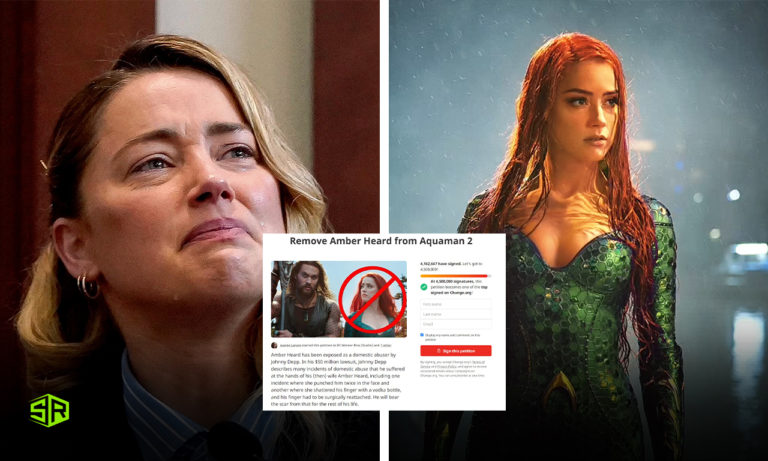 Johnny Depp and Amber Heard have been dominating the headlines as of late because of their ongoing court case. It comes as no surprise that audiences have been appalled at Heard’s allegations of domestic and sexual abuse against her ex-husband.

As a result of the allegations, Depp was removed from multiple big projects like Pirates of the Caribbean 6 and Fantastic Beasts: The Secrets of Dumbledore. With the Pirates 6 deal alone, Depp lost $22.5 million, according to Depp’s Manager.

On the other hand, Amber Heard reprised her role as Queen Mera in Zack Snyder’s Justice League. However, people have not been very ecstatic about her return as Queen Mera. Less than a month ago, on Change.org, a petition demanding Heard be removed from Aquaman 2 got initiated.

The number of Depp fans who signed the petition reached a staggering number of 2.1 million very quickly.The count has now reached up to 4.1 million signatures. That is a huge number of people not wanting to see Heard in the DC Extended Universe film Aquaman 2. Despite that, the filmmakers at Warner Bros have said they don’t intend on removing her role entirely. 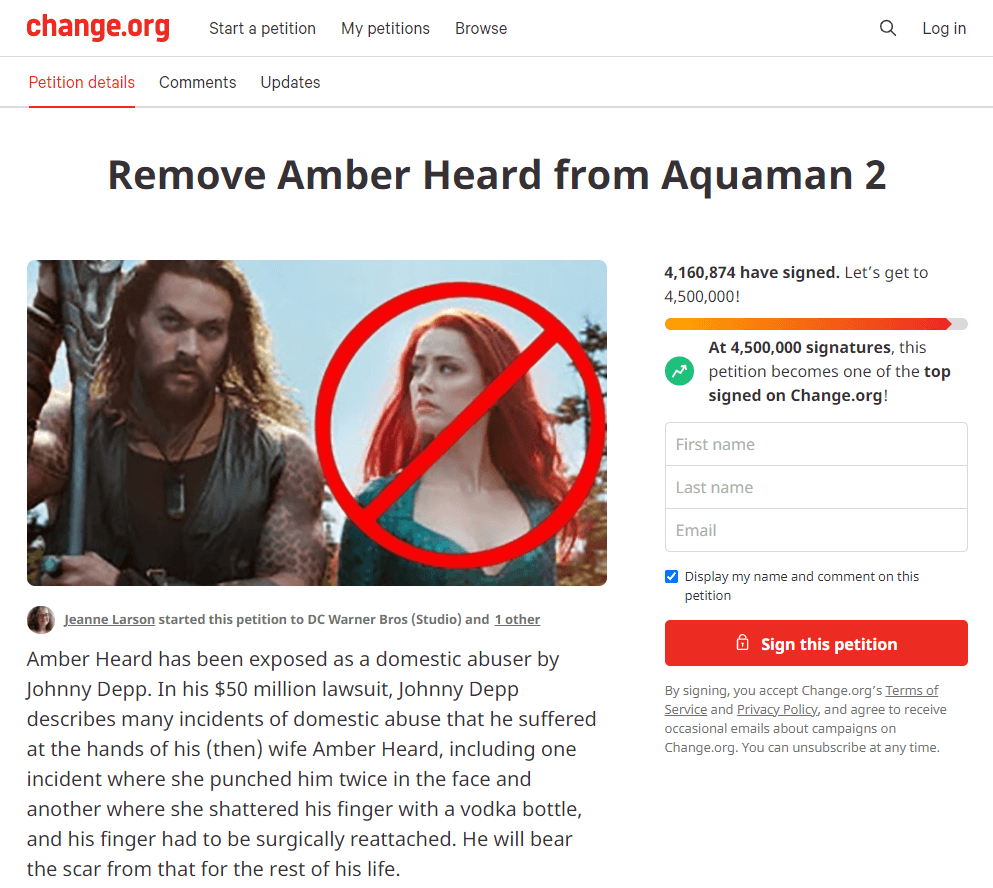 Uber Facts recently reported how it’s one of the most-backed petitions on Change.org:

The petition calling for Amber Heard to be dropped from 'Aquaman' has now received over 4 million signatures, making it one of the most backed petitions on Change(.)org

But after facing a boycott of the movie on such an extensive level, they have reduced Queen Mera’s appearance to 10 mins in the entire film. With the continuous rise in the signature count, perhaps, Warner Bros might have to rethink its decision altogether.

The petition was birthed by fans when Warner Bros. replaced Johnny Depp with Mads Mikkelsen in Fantastic Beasts: The Secrets of Dumbledore.

Since the defamation trial started, the petition has been gaining traction, and as a result, more and more people have been joining hands with the other fans. Perhaps, the director changes his mind and ends up reshooting and editing scenes to soothe the movie enthusiasts; if not, then Warner Bros has a lot to lose on the line.

A user on Twitter showed support for the petition and tweeted:

If you doubt the power of the audience, allow us to give you a bit of a reality check. After the casting of Mads Mikkelsen instead of Johnny Depp, Fantastic Beasts: The Secrets of Dumbledore was released last month, and unfortunately, it didn’t perform well.

Much to the dismay of filmmakers, the movie was successful in making $376 million only at the global box office against a $200 million budget. The numbers may not look bad seemingly; however, compared to the rest of the Harry Potter movies, this qualifies as the worst-performing movie in the entire franchise.

Given there’s no news about the sequel being in production, it seems to be in jeopardy. Specifically, due to the backlash the film and Warner Bros. received after replacing Depp.

The defamation case will be resuming today after a week-long break. The case proceedings started on April 11th in Virginia. On Monday, Heard will be cross-examined by Brown Rudick’s attorneys. According to a source,

During the cross-examination next week, Camille Vasquez plans to call out Ms. Heard on the many lies and inconsistencies in her timeline that have changed considerably over the last six years.

It’s clear unless James Wan removes Heard from Aquaman 2, DC will have to risk losing a lot of revenue.

Whitney Henriquez, Amber Heard’s sister, will also be testifying on her behalf. Barkin and Henriquez have also testified for Heard previously in the libel lawsuit against The Sun in the UK.

So far, Depp is suing Heard for $50 million for her allegations of domestic abuse, which in the words of the actor ‘cost him everything’. Whereas the actress is counter-suing the actor for $100 million for his smear campaign against her.

The entire case is related to a Washington Post of December 2018. Although the article never mentioned Depp by name, his lawyers have been convinced that Heard was referencing him, and that’s what they have told the jurors as well.

Johnny Depp’s psychologist, Shannon Curry stated that Amber Heard suffers from two personality disorders. In the past, Heard has also been diagnosed with PTSD, for which she conveniently blamed her ex-husband.

Depp and Heard parted ways after less than 2 years of married life. Their divorce was finalized in 2017. Depp has refuted all allegations made by Heard by stating he has never stuck any woman, much less her. Whereas Heard’s attorneys argued that her opinion should be protected under the free speech of the Constitution’s First Amendment.

The trial is expected to last until late May. Less than two years ago, Depp lost a libel against a British tabloid, The Sun, which labeled him a ‘wife beater’. A London High Court judge ruled that he had repeatedly assaulted Heard.

Depp’s lawyers eventually filed the case in Fairfax County, outside the capital, as the Washington Post is printed there; however, it is not a defendant in this case.

Share your thoughts on the petition and let us know what you think about it in the comment section below. Are you in favor of #JohnnyDeppIsInnocent?