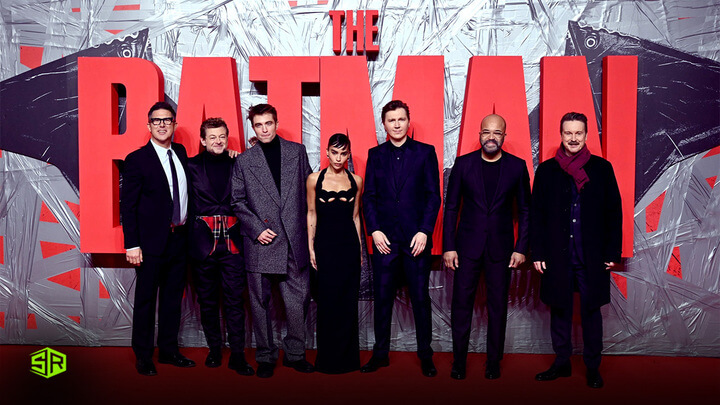 “The Batman” is still running strong 3 weeks into its theatres, maintaining a firm grasp on the top box office place.

As per studio estimates, Robert Pattinson’s debut as the Dark Knight earned an extra $36.8 million over the weekend. It also surpassed the $300 million level ahead of schedule.

These ticket sales propel “The Batman” above the $300 million mark in North America, making the comic book adaptation the second pandemic-era picture to accomplish it, after “Spider-Man: No Way Home“. The picture Spider-Man: No Way Home grossed $1.8 billion so far, and it is also the major winner at the Critics Choice Super Awards, with three accolades, including best superhero films.

“The Batman,” directed by Matt Reeves, also earned $49.1 million overseas this weekend, bringing the film’s global total to $598.1 million. The only country where “The Batman” appears to be faltering is China, where it made $12.1 million in its debut weekend. However, because of the epidemic, around 43 percent of Chinese theatres are closed, and “The Batman” performed somewhat better than “Uncharted,” which also premiered this weekend for $10.3 million.

The production of “The Batman” is reported to have cost $200 million, not including the millions spent on marketing. However, it is already a triumph for Warner Bros., which suffered a box office loss in 2021 as a result of all of its films being released simultaneously in cinemas and on HBO Max.

Three new films were released in theatres throughout the country, but “Jujutsu Kaisen 0: The Movie,” A24’s horror thriller “X,” and Focus Features’ mystery drama “The Outfit” did not threaten “The Batman.”

Also, it helps that competition in the marketplace has been minimal. The anime “Jujutsu Kaisen 0” was the largest contender this weekend, with an estimated $17.7 million in its debut weekend. The Japanese movie is based on a best-selling manga and is available in both dubbed and subtitled versions.

The PG-13 “Jujutsu Kaisen 0” debuted in second place on the domestic box office rankings, with $17.6 million from 2340 theatres. Anime movies have grown in popularity in North America, with Funimation, which has recently combined with Crunchyroll and is primarily kept by Sony Pictures, at the forefront. Last spring, the movie firm grossed $21.2 million with “Demon Slayer the Movie: Mugen Train,” a significant performance in a period when theatres were at full.

David A. Gross said “This is a terrific opening,” who is the owner of the film consultancy business Franchise Entertainment Research “Reviews for this and all Funimation/Crunchyroll flicks have been excellent.” They have not made a huge mistake.”

This weekend also saw the release of the horror flick “X,” which is estimated to gross roughly $4.4 million. “X,” directed by Ti West, tells the story of a group of people who are tortured while filming a pornographic video.

According to Rotten Tomatoes #XMovie (97%) is the year’s top-rated horror film.

Gross, on the other hand, points out that “Horror is not expensive to make — clever cinematography, editing, and sound design go a very long way. ‘X’ should recover its costs and make a few dollars after all ancillary money is counted.”

“X,” written and directed by Ti West, follows performers as they work on an adult movie in rural Texas. But when the visitors are caught in the act by the guests’ reclusive hosts, an elderly couple, things turn nasty.

“The Outfit” began in ninth place with a modest $1.5 million from 1,324 locations. “The Outfit,” directed by Graham Moore and starring Mark Rylance and Zoe Deutch, has received great reviews with a 91 percent on Rotten Tomatoes.

“Uncharted” surpassed the $200 million milestones at the foreign box office, bringing its global total to $337.3 million.

“Dog,” starring Channing Tatum, debuted at No. 5, knocking “Spider-Man: No Way Home” out of the top five for the first time in 14 weeks.

“Dog” took in $4 million from 3,307 venues, increasing the North American total to $54 million. It’s a fantastic outcome for the vacation trip comedy, which only cost $15 million to produce. And it’s promising proof that studios can still generate a profit on non-superhero films if expenditures are kept in check.

And “Spider-Man: No Way Home,” despite being on the big screen for 3 and a half months, was no slouch, grossing $3.2 million from 2,585 screens. The comic book blockbuster has earned $797.56 million at the domestic box office as of this weekend. It’s only a few million dollars away from being the third film in history to gross more than $800 million in North America, behind “Star Wars: The Force Awakens” ($936 million) and “Avengers: Endgame” ($858 million). 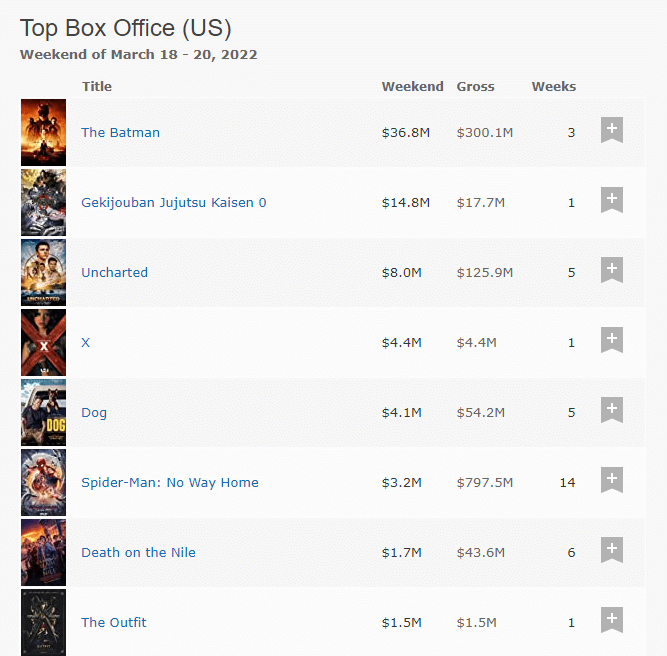 What this picture does do is to present a decent new Batman narrative, one with some really fascinating turns and a terrific storyline. Fans are going crazy with Batman, as the film has taken has hit the box office. The image is by IMDB Top Box Office (US).

This film has received a lot of positive feedback from its fans, which you can read about here:

Saw The Batman today. Guy behind me fell asleep and snored for like an hour. Woke up and his son started explaining to him everything he missed during a quiet scene and the whole theater yelled at them. Movie rocked. 10/10

honestly The Batman didn’t feel like 3 hours to me i was having too much fun 😭😭 pic.twitter.com/VYTGDEmY8L

You can also share your comments on the blockbuster movie below!