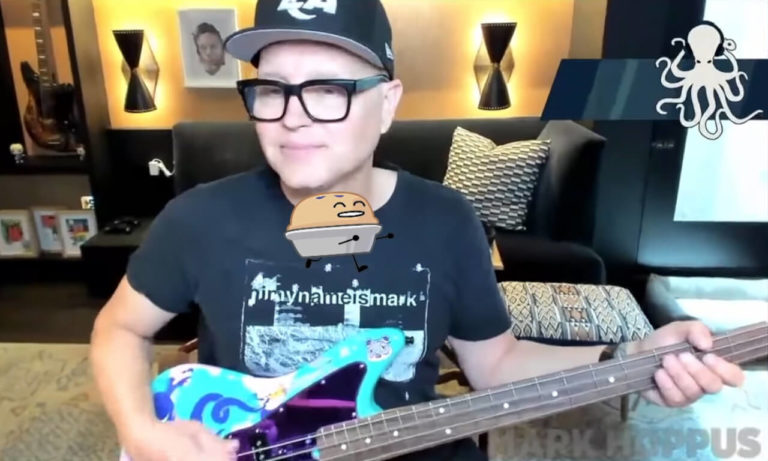 For the first time after his cancer diagnosis, Hoppus came on his Twitch stream to address his fans and his fans couldn’t be happier.

Watch the video below:

It is the first time he has held his guitar after the diagnosis. He played the band’s popular song “Not Now” which was released in 2005.

Finally, fans can take a breath of relief, as Mark Hoppus has picked up the guitar after several months. What’s even better is that Hoppus said that his treatment is going well! He shared that now he feels strong enough to pick the guitar back and play some music.

Hoppus went public with his diagnosis earlier this month.

“My classification is stage IV-A, which means, as I understand it, it’s entered four parts of my body,” he said. “I don’t know how exactly they determine the four part of it, but it’s entered enough parts of my body that I’m stage IV, which I think is the highest that it goes. So, I’m stage IV-A…The cancer isn’t bone-related, it’s blood-related. My blood’s trying to kill me.”

In the month of June, Mark Hoppus revealed to the audience that he was undergoing chemotherapy for the treatment for Large B-cell lymphoma. He stated,

“I have cancer. It sucks and I’m scared, and at the same time I’m blessed with incredible doctors and family and friends to get me through this,”

Speaking in detail about his health, the singer said,

“Scans indicate that the chemo is working! I still have months of treatment ahead, but it’s the best possible news. I’m so grateful and confused and also sick from last week’s chemo. But the poison the doctors pump into me and the kind thoughts and wishes of people around me are destroying this cancer. Just gonna keep fighting…”

Hoppus has been quite public about his health and his fight against Stage 4-A Diffuse large B-cell lymphoma.

The singer has repeatedly thanked his fans for the immense support they have provided him with in this time of adversity. It seems that the public’s prayers are truly working for him.

This is the same type of cancer his mother had faced and successfully fought with her bone marrow transplant; we hope that Hoppus, too, makes it out in great health.

Lymphoma Research Foundation reports that around 18,000 people are diagnosed with DCBCL each year in the U.S alone. This type of cancer is very fast growing and affects the B-lymphocytes,” it is a type of white blood cell that is very important part of the lymphatic system.