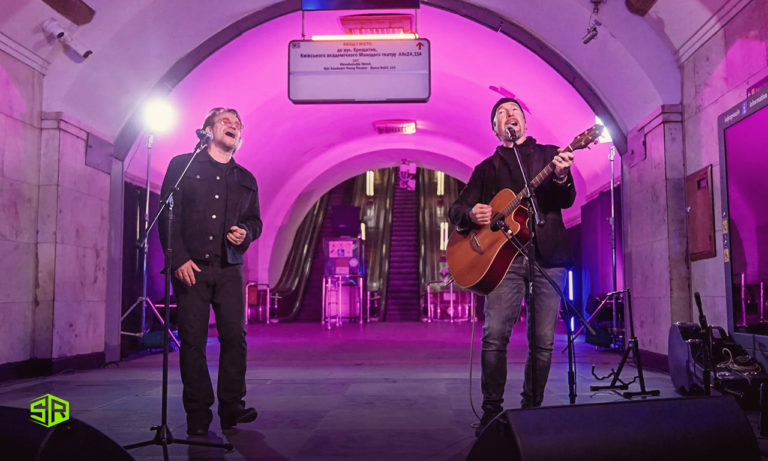 Over the weekend, Bono and the Edge traveled to Kyiv, Ukraine, to conduct a surprise concert designed to brighten the spirits of people and troops alike during their country’s ongoing Russian invasion.

On Sunday, President Volodymyr Zelenskyy personally requested the two members of U2 to perform an acoustic concert at one of the city’s subway stations that had been turned into bomb shelters during the war. According to the Irish Times, the duo’s set featured U2 favourites including “With or Without You,” “Desire,” “Angel of Harlem,” and “Vertigo,” as well as a rendition of Ben E. King’s “Stand By Me” in which Bono substituted “Ukraine” for the title “Me.”

During the concert, Bono told the crowd,

The people in Ukraine are not just fighting for your own freedom, you are fighting for all of us who love freedom. We pray that you will enjoy some of that peace soon.

On their makeshift stage, the pair were joined by Ukrainian artists who had to quit their instruments in order to join the military, including vocalist Taras Topolya of the Ukrainian band Antytila.

Prior to the concert, the two musicians tweeted from the band’s official account, stating, “President @ZelenskyyUa invited us to perform in Kyiv as a show of solidarity with the Ukrainian people and so that’s what we’ve come to do.”

President @ZelenskyyUa invited us to perform in Kyiv as a show of solidarity with the Ukrainian people and so that’s what we’ve come to do. — Bono and The Edge #StandWithUkraine

Bono and the Edge earlier demonstrated their support for the nation by performing a rendition of their song “Walk On” during the Global Citizen’s “Stand Up for Ukraine” livestream event. At the time, the pair stated,

The brave people of Ukraine are fighting for their freedom — and for ours — in the face of unspeakable violence and an unjust invasion. More than 4 million people, mostly women and children, have had to flee for their lives — a population nearly the size of Ireland. World leaders must stand up and stand by Ukrainians now … those who are fighting and those who have fled … and stand with refugees everywhere who have been forced from their homes and their lands.

Bono was also alleged to have visited the village of Irpin, on the outskirts of Kyiv, and Bucha, which is presently being investigated for war crimes committed by Russian soldiers.

A post shared by U2 South America 🇧🇷 (@u2southamerica)

Various nations have offered economic and military help to Ukraine, with NATO troops working closely together, but President Zelenskyy continues to push his country to fight back, urging “peace talks” – despite the fact that those attempts have been ineffective.

Since Russia’s invasion of Ukraine began in January, Bono has become the latest singer to express his support. Along with Madonna and Billie Eilish, U2 previously collaborated with Global Citizen to assist individuals affected by the fighting. Arnold Schwarzenegger who is an Austrian-American actor, and film producer issued an Emotional Call to Russians to End the Illegal Ukraine War.

Check out the Buno and the Edge performance below.