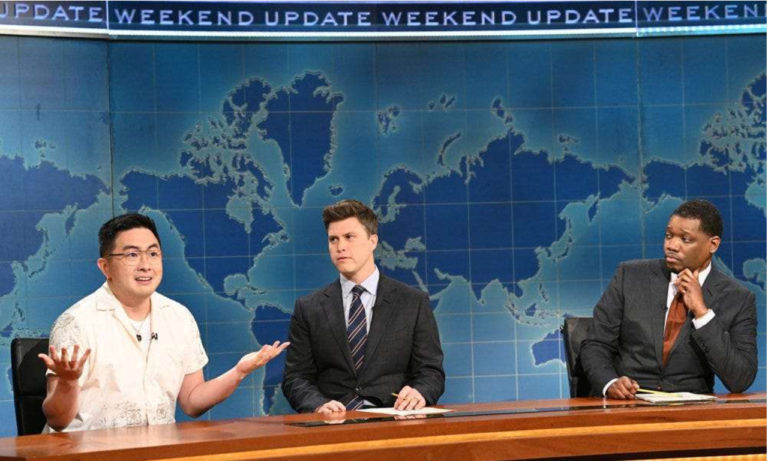 Bowen Yang appeared on the sets of Saturday Night Live, being the first-ever cast member of East Asian descent.

The comedian has become an essential and amusing part of the show, but he showed why it’s really important that he was there on Saturday night on the “Weekend Update.”

He started by addressing that the Asians in this country have been dreadful for the last
two weeks and since forever all the weeks before that.

Yang appeared on the show when the host Colin Jost introduced him being an “Asian cast member” of the popular show, “Is that my official title?” Yang replied to the introduction. Jost responded to him by saying that’s how Yang asked him to respond.

Bowen talked about the action items that everyone can take, which included checking in with AAPI friends “and tell them they’re so hot” and amplifying “Asian voices who want more Paneras in North Brooklyn.”

He continued his monologue addressing the line ‘punch an Asian grandma,’ as it is not a dialogue, and that he has an Asian grandmother. “You want to punch her? There ain’t no common ground, Mama.” Jack continued.

Bowen then requested people to do more than just tipping people. He said, “Why are you telling me that you tipped your manicurist well? Let me know when you get on your knees and scrub her feet while she looks at your phone, do more.”

Yang is getting support from the Twitterati and celebrities as well,

Bowen reminded everyone that he is not just a comedian, and he does not have all the answers. He continued that he is not looking for any of the solutions online. Instead, he is looking around him.

He quoted the ‘GoFundMe for Xiao Zhen Xie,’ which was about an Asian grandmother who fought against her attacker, and the funds raised over $900,000, and she gave all the money back to the community. He quoted this by saying that this is who Asians are.

He cited the Mandarin cheer that means to “fuel up,” he addressed: “I don’t know what’s helpful to say to everyone, but that’s what I say to myself. Fuel up, do more.”