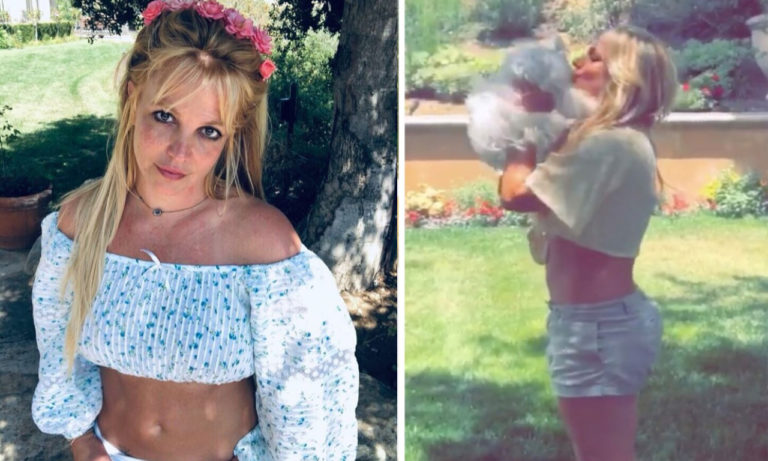 Britney Spears has been reunited with her dogs.

The dog sitter — who took care of the dogs for two weeks while they were away — has brought them back to Spears.

Earlier this week, the 39-year-old American singer got to see her dogs after they had been taken away by the dog sitter out of fear for their health.

According to the sources, Britney’s dogs were in critical condition when one of her housekeepers decided to take them away from her.

The animals were then reportedly removed from Britney’s house, who fell into an argument with her housekeeper on this decision. Britney’s employee later filed a report with Ventura County Sheriff’s Department for an alleged misdemeanor battery incident.

A source tells PEOPLE that the “Lucky” singer had reunited with her dogs and was “thrilled” after seeing them.

The dogs were reportedly dehydrated and both were made sick by eating other things instead of their special diet. One dog with special dietary issues got particularly ill, according to the sources.

However, the housekeeper, who took the dogs away from her, taking them to the vet, no longer works for her.

Another insider close to Britney confirmed the dogs’ return: “The dogs are back, and they have more help now.”

“Her dogs are a sensitive breed that often has health issues. She has gotten clear instructions about how to care for the dogs now,”

Britney reportedly believed that her father, Jamie Spears, who currently runs her conservatorship, was involved in removing her pets from her house.

According to the sources, the concerns over the dogs’ safety started around two weeks ago when one of them fell ill.

Earlier this week, Capt. Eric Buschow confirmed that Britney suspects in a battery investigation after one of her employees reported that she “struck them during an argument” inside her home.

Buschow also confirmed that no injuries were reported:

“Ultimately, that investigation will be forwarded to the attorney’s office for review. It’s a minor misdemeanor battery [investigation],”

Buschow declined to “discuss the particulars” of the incident but told us that misdemeanor battery happens when there is “physical contact” with another person.

However, an insider close to Spears told PEOPLE that the report is fake and fabricated, adding that “she didn’t hit anyone.”

“The housekeeper was holding her phone, and Britney tried to knock it out of her hands,”

Britney’s lawyer, Mathew Rosengart, has not said anything about the incident yet.

The occurrence happened many days after Spears’ father said he would not let go of her conservatorship until the time is right.

However, Jamie’s lawyer stated, “Mr. Spears is willing to step down when the time is right, but the transition needs to be orderly and include a resolution of matters pending before the Court,”

In order to reach that result, the Court should encourage all interested parties to meet and confer in order to resolve those pending matters in the best interests of Ms. Spears.

Britney spoke in the June 23rd court hearing about her hopes to end this conservatorship, which was implemented during several personal problems.

I just want my life back; it’s been 13 years. And it’s enough. It’s been a long time since I’ve owned my money. And it’s my wish and my dream for all of this to end without being tested.

The issue is set to come before a Los Angeles court in a September 29 hearing. We hope that the court decides in favor of the pop queen, and she can finally live with the freedom and independence that she deserves.