Bryan Cranston Wins Hearts on MLB All-Star Celebrity Softball Game, Says He “Might Be More of a Cheerleader” 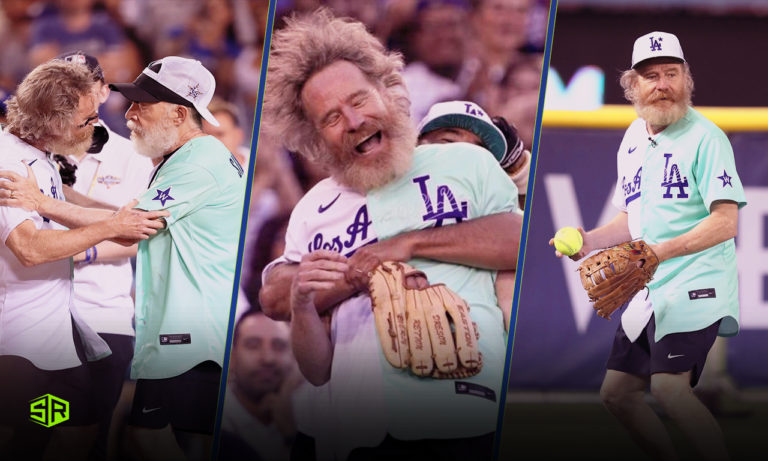 On Saturday night, the stars shone brightly in Los Angeles.

However, of all the stars, one stood prominent.

Actor Bryan Cranston, known for his role as Walter White in “Breaking Bad,” showed why he’s one of the most beloved actors in Hollywood due to his reaction to an injury during the game.

The 66-year-old got hit by a softball on the shoulder during batting practice for the All-Star Celebrity Softball game that took place at Los Angeles’ Dodger Stadium on Saturday evening.

As soon as he was hit with the softball by “In the Heights” actor Anthony Ramos, Cranston went down on his knees for a minute.

Ramos rushed to the actor’s side as he saw him double over and checked with him if he was okay, asking, “Are you all right?”

Comedian Guillermo Rodriguez from “Jimmy Kimmel Live” also showed up and asked the actor if he needed water.

Eventually, with Ramos’ help, Cranston got back on his feet. The actor went on to put his arms around both guys reassuring them that there were no hard feelings as he continued to rub his shoulder.

In the incident video, he could be seen being asked if the actor wanted tequila, to which he replied, “might have to, yeah.”

Before the celebrity softball game at Dodger Stadium, Anthony Ramos was taking BP in the batting cage. @BryanCranston was pitching and he took a comebacker off the chest! #AllStarGame pic.twitter.com/7OOMOtxgm8

Later on, Cranston went back to his trailer and confessed, “It’s definitely going to bruise. I might be more of a cheerleader in this game.”

Comedian Guillermo also shared a video on Twitter where he knocked out a camera during his batting practice.

During the game, Cranston’s sportsmanship continued as he pretended to throw himself into the game when the umpire struck him out but he insisted it was a ball. The commentators also agreed to say, “There is no way that’s a strike.”

Cranston could be seen stomping his feet and yelling, ‘It was inside!’ in protest of the umpire’s decision, in supposed rage.

Bryan Cranston kicks dirt on the umpire after he calls a ball a strike 🤣🤣🤣🤣@UmpJob pic.twitter.com/UKv3rrLYVF

Eventually, Cranston’s Los Angeles team lost the battle to Brooklyn 15-13 as the former San Francisco star Hunter Pence’s two home runs won the game for the NY team while being booed by the home crowd.

Catch the winning strike right here, followed by the winning team’s triumph celebrations by spraying a bottle of champagne all over the NY team:

Here are some audience reactions to the wholesome game night:

@PostCredPod shared how Bryan Cranston sure seems to be “living his god damn life”:

it is our pleasure to report that Bryan Cranston appears to be living his god damn life 😂 pic.twitter.com/qdd0Xw6mFe

@BayAreaBrennan shared the tweet, which got more than 107.6 views here; the commentator introduces Bryan as he takes the pitch to bat, saying how he’s s huge dogger ball fan and “tremendous” tonight:

bryan cranston walking up to the breaking bad thing might be the hardest i’ve laughed all year pic.twitter.com/dnGlrKnFtl

Don’t miss this tweet by @devnnoelle as Bryan shows his best moves:

Tyler A. Smith said, “Bryan Cranston is the baseball hero we didn’t know we needed,” sharing a GIF of the 66-year-old man dumping a bucket of paper trash on a guard:

Bryan Cranston is the baseball hero we didn’t know we needed pic.twitter.com/JJb8KnLjMy

Be sure to watch all the MLB games without worrying about accessing the channels that will air the shows. If you are residing outside the US, you can watch MLB All Star game on Fox Sports here, MLB season live here, and MLB World series here. Not much of a sports fan but rather a Bryan Cranston fan? Perhaps, you’d be more interested in watching the Breaking Bad spin-off Better Call Saul.