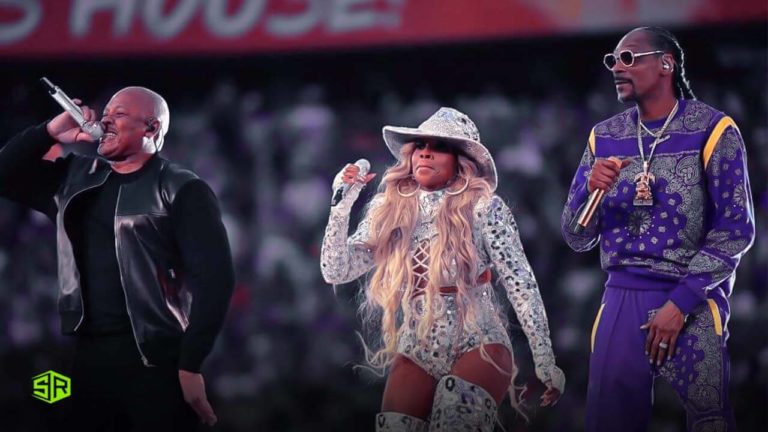 The 2022 Super Bowl Halftime Show made headlines after a star-studded event took place on February 13, 2022.

Dr. Dre headlined the much-anticipated halftime show of NBC’s 2022 Super Bowl alongside several notable music artists including Eminem who took a knee on stage that became one of the most talked-about moments of the event.

The star-laden halftime show featured performances from several notable musicians including Snoop Dogg, Eminem, 50 Cent, Kendrick Lamar, Mary J. Blige, and Dr. Dre. The group of fan-favorite singers provided lit the entertainment show at SoFi Stadium of Inglewood, California. The show happened during the halftime of the faceoff between the Los Angeles Rams and the Cincinnati Bengals.

That marks the first time that hip-hop stars have headlined the showdown.“This is what it’s about,” Snoop Dogg stated during a press conference in Los Angeles this week. “This is what hip hop and the NFL is supposed to be about: representing about a change, about moving forward, so we appreciate the NFL for even entertaining hop hop because we know there are a lot of people who won’t (have) hip hop on stage,” he stated.

The show began with the SoFi field occupied by an ensemble of white buildings that appeared to be the Los Angeles city grid.

Dre alongside Dogg kicked off the show with their dazzling performance of “The Next Episode” in a replica of different interiors. Followed by that act, the duo took to the top of the buildings to perform “California Love,” modernizing some of the lyrics of the super-hit song of Tupac Shakur.

The next one in the act was 50 Cent who made a surprise appearance and literally emerged upside down on stage to sing “In Da Club” with a group of stunning female dancers in an artificial party setting.

Blige’s entrance made it a “Family Affair” as she stood atop the building structures, donning all-white adorned with sequins. She was ushered by dazzling backup hoofers, who later ebbed while the singer went on to sing “No More Drama” alone.

Lamar appeared on stage surrounded by men dressed in black suits with golden hair and wearing girdles with “Dre Day” written over them. He came in front of the stage and went on to perform “Alright.”

The show was constantly thrust with super hit songs, as Eminem emerged on top of the roof of buildings briefly singing some lyrics from “Forgot About Dre” before performing “Lose Yourself,” a song that won him Grammy Award and Oscar with Anderson. Paak playing the drums.

Eminem concluded his performance with a lengthy knee down on stage to show his support against racial injustice, an evident testimonial to Colin Kaepernick taking a knee before the NFL games in the past.

The Recount shared the footage of the iconic moment:

However, in the wake of speculations in the electronic and social media that the NFL did not sanction the plan of Eminem to take a knee, a representative of the league dismissed that conception in a message received by The Hollywood Reporter after the halftime show. “We watched all elements of the show during numerous rehearsals this week,” said the NFL rep.

Finally, Dre came to the piano and played the famous introductory notes of his mega-hit song “Still Dre.” This was followed by all the singers gathering at the top of the stage structure to end the marvelous showdown.

Deaf rappers Warren “WaWa” Snipe and Sean Forbes were also featured at the halftime show to perform American Sign Language interpretations of each of the songs. The duo made history and became the first deaf singers ever to be featured at the NFL halftime show, as revealed by the Detroit Free Press.

Dr. Dre, obviously, served as the headliner and stated it would be “one of the biggest thrills of my career” ahead of the show.

The eventful night was further highlighted by the accusations of sexual assault and battery against Snoop Dogg as a lawsuit was filed just a few days before the show. However, the rapper has rebuffed the allegations, labeling the case “a shakedown.”

Dr. Dre during a press conference which was held on Thursday expressed that the show planning was coming for a long time, given the decades-long effect that he and his fellow artists have had in the music industry.

“This should’ve happened a long time ago,” said Dr. Dre expressing his feelings. “Hip-hop is the biggest genre of music on the planet right now, so it’s crazy that it took all of this time for us to be recognized. I think we’re going to go on and do a fantastic show, and we’re going to do it so big that they can’t deny us anymore in the future.”

“I’m extremely excited to share the stage with my friends for the #PepsiHalftime Show,” previously in September Dre write in the caption of the group photo. “This will introduce the next saga of my career… Bigger and Better than Ever!!!”

For Snoop Dogg and Dre, the Super Bowl halftime show was quite personal, said Todd Kaplan the VP of Marketing at Pepsi in a statement, as they’re both natives and “were at the forefront of the West Cost hip-hop revolution.”

Thank you 4 a beautiful night !!

On the other hand, Eminem revealed that heading for the performance he was feeling so much pressured and was quite nervous.

Even though the rapper of “Lose Yourself” remained composed and tight-lipped during the performance, he did confess that he was “blown away” by Dr. Dre’s creative intuition for the show, also by Kendrick’s “top tier” lyrics.

“When the whole thing started going down and we were like, ‘OK, this might be actually serious.’ I was trying to envision what Dre might do, I was thinking like, yeah, that’s dope that all of us are gonna rap together, right, and that kind of thing, but I didn’t expect the production to be like this,” Eminem further explained.

Meanwhile, the superstar Mary J. Blige had no doubts about being the only woman performing at Super Bowl Halftime Show this year in fact, she embraced it and did an outstanding job.

“I love it,” Blige told PEOPLE when she was asked about how it feels being the sole woman in the performers’ squad.

“I love the fact that I’m respected by my male peers like that, I’ve always been. I’ve never had a problem with any of my male peers,” Mary J. continued.

“To actually have Dr. Dre reach out and ask was just huge, because Dr. Dre is one of the most important people in hip-hop, and as a producer, as a writer, as a rapper. He’s just the one, you know?” she added.

The final showdown of NFL Super Bowl 2022 was played between the Los Angeles Rams and the Cincinnati Bengals at SoFi Stadium in Inglewood, California. Rams clinched the title with the final score of 23-20. The triumph over the Bengals made the Rams champion for the second time.

The Super Bowl 2022 halftime show was literally more than just a halftime showdown, as it marked history with all-black hip-hop stars’ performances. Probably the most iconic singers of the modern era, Dre, Dogg, Em, 50, Blige, and Kendrick all together put on a stellar show.

In case you missed the glamourous Super Bowl 2022 halftime show, spare some time and catch all the action here on this link.

How to Watch NFL Pro Bowl from anywhere