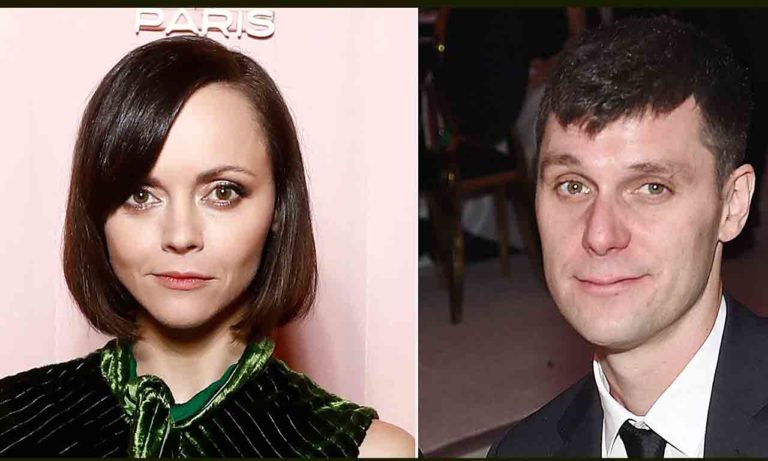 The Adams family fame star “Christina Ricci” has filed for a domestic violence restraining order against her husband “James Heerdegen.”

Six months after filing for divorce, Christina Ricci has now filed a request for a domestic violence restraining order against her James Heerdegen. A judge has granted her request, and according to the restraining order issued, James Heerdegen has to stay 100 yards away from Christina Ricci; he cannot visit and meet their 60-year old son Freddie, and he will also have to stay away from the family dog.

Christina Ricci and James Heerdegen married in October of 2013, and Ricci filed for divorce back in June 2020.

Christina Ricci has claimed that she had been abused verbally and physically by James Heerdegen while they were together. Ricci alleges that James Heerdegen has assaulted her from time to time, and due to the fear of her life and her son, she requested the restraining order. According to People, the request was submitted by Ricci’s attorney Samantha Spector on Tuesday.

James Heerdegen’s attorney has told TMZ that his client “unequivocally denies all allegations of abuse made by Ms. Ricci as having occurred in 2020.”

The 40-year old actress has claimed that James Heerdegen has abused her physically and emotionally, and “many of these acts of abuse” took place in front of their son.

Christina Ricci has claimed in her declaration that the abuse started back in 2013, as soon as she came to know about her pregnancy.

Writing about the alleged abuse, she mentioned the family vacation in New Zealand. She described “I began to feel extremely isolated,” and Heerdegen’s words made her think that “he could kill me.”

Ricci wrote in her declaration,

“He said the only way he could feel sorry for me is if I were dismembered into small pieces.” “That night, I hid all the knives in the cabin where we were staying. I feared for my life and the life of our son. I slept in a separate bedroom with Freddie, and I locked the door.”

She has also alleged that on 16th December 2019, Heerdegen “brutally attacked” her.

Ricci said that months later, she told Heerdegen that she wanted a divorce only to find herself “stuck in the house with a man who had physically and emotionally abused me, and knew that I wanted to end the marriage” when the pandemic was at its peak and lockdown began.

Ricci had also mentioned in her declaration that when lockdown began, Heerdegen “focused solely on punishing and terrorizing me 24 hours a day,” adding, “I was afraid to sleep at night.”

Christina Ricci alleges that on June 2, 2020, Heerdegen “chased me through and out of the house” while trying to take her cell phone away from her as she was trying to contact 911.

“He grabbed my wrists and hands, dragged me, and slammed my body into the fire pit we have in the yard,” she described in her declaration. “I suffered cuts, bruising, and soreness of my hip, which still causes me pain today.”

The 40-year old actress claims that on June 25, Heerdegen followed her around the house “all morning, screaming at me, spitting on me, throwing coffee at me, and throwing a chair at me” in the front of their son.

Following this event, Ricci claims that she contacted 911 and was given protective order against James Heerdegen. In her filing, she has stated that Heerdegen “became emotionally unhinged” after finding out that she had been spending time with a male friend. She said that he became “increasingly hostile and erratic,” including sending the actress “hostile text messages containing veiled threats to harm my reputation in the media.”

Ricci has also shown great concern for her son as she claims that her husband “continues to threaten to abduct” him. She has also requested the court to refrain Heerdegen from leaking her private audio and video files and that he should return them to her.