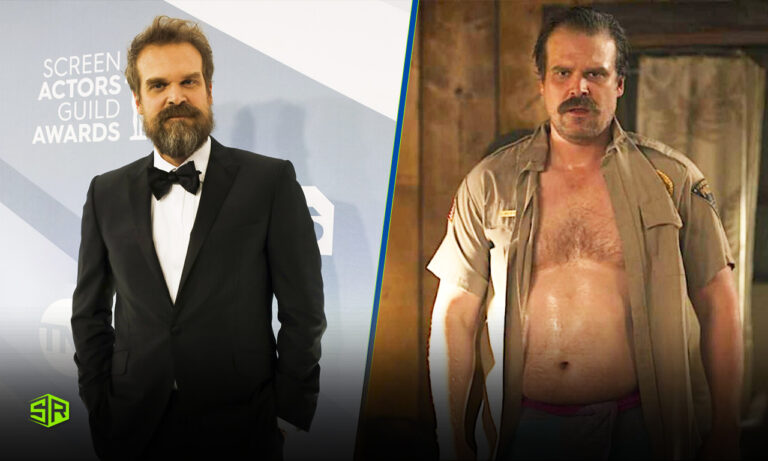 David Harbour revealed that his 80-pound weight loss for Stranger Things Season 4 felt “like a rebirth.” However, he still loves his “big body” just as much as his “lean athletic” one.

Harbour plays the role of Jim Hopper in the Netflix series Stranger Things. In an interview previously, Harbour told GQ that he lost 80 pounds, nearly one-third of his body weight for his character in season 4, as he’s captured by Russians and kept as a prisoner for months. As a result, he needed to look much gaunt and leaner to match his character’s appearance.

In another interview recently, Harbour told People that the weight loss had an impact on his life apart from the show. He said that he came to notice that he was capable of doing things he wouldn’t have otherwise had his body aged.

It opened up a whole new world, [I’m] a lot more pliable and a lot more teachable in my mid 40s, than I ever imagined it could be. It felt like a rebirth. It was really refreshing and really exciting to feel like after months of training like, Oh now I can just sprint across the street if a car comes. Just simple little things like that that were really exciting for me.

In July, Harbour shared an Instagram post about how it took him eight months to lose that much weight. He worked alongside a personal trainer to “make the transformation, and then another year to keep it through the pandemic.”

Although he confessed to GQ that the transformation wasn’t something he would “ever” do again, and he had to gain weight again once more for his Santa Claus-themed action movie, Violent Night.

He said to People:

I love my big body as much as I love my lean athletic body. Something about being an actor is you are allowed to live in different skin, and I like being a chameleon in that way.

The actor and his trainer David Higgins did an Instagram Live to answer people’s questions about Harbour weight loss journey. The latter described it as a “wacky transformation.”

The two discussed the pros and cons and struggles along the way.

In 2021, Adele has also addressed her own weight loss journey in an interview with Oprah Winfrey. She described her emotions as, “I was body-positive then and I’m body-positive now.” Apart from Adele, other notable names who went on a similar cleanse are Shonda Rhimes, Rapper Action Bronson, Jessica Simpson, Drew Carey, and many more.

Sadly, celebrities don’t get to live an easy life. No matter what, they’re criticized by cyberbullies because of their looks for being either “too fat” or “too skinny.”

Millie Bobby Brown recently opened up about how she was cyberbullied and sexualized at the young age of just 9 years old.

The kids of famed celebrities also have to suffer the consequences of being exposed to the limelight. Snoop Dogg’s daughter Cori Broadus had to give the trolls a shut-up call for body shaming her in her Instagram DMs.

Do you find David Harbour’s weight loss journey for Hopper in Stranger Things Season 4 impressive? Let us know in the comment section below.