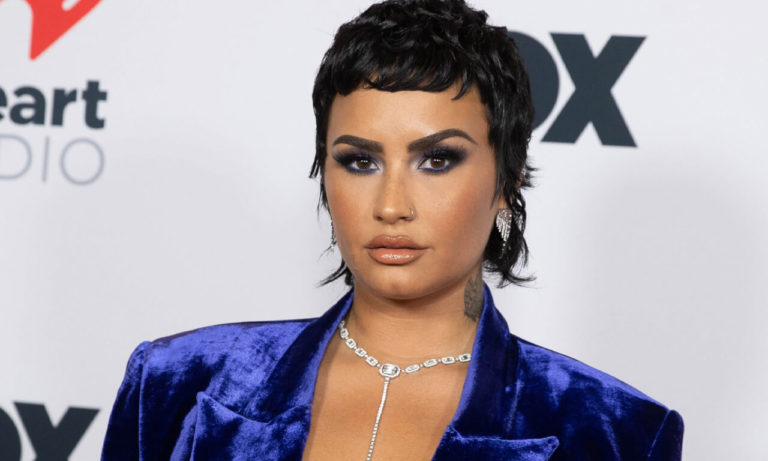 Lovato was engaged to soap actor, Ehrich for two months last year. Yesterday they opened up on how letting go of that relationship has been helpful for both of them.

In an interview with The 19th on Thursday, Lovato discussed that the pandemic has played a great role in their coming out journey and shared that the “dissolvement” of their relationship helped them find their true self.

I was able to stand on my own two feet without needing someone else to validate me or to make me feel accepted,” they said. “And when I said goodbye to that relationship, I also said goodbye to everything that was holding me back from being my most authentic self.

Lovato revealed that they first identified as non-binary in March 2020, right at the start of the pandemic. They later fell in love with each other which caused them to “ignore” parts of themselves.

In May, the pop star announced that their pronouns are they/them, telling fans that the decision came “after a lot of healing & self-reflective work.”

I met someone and I got into this straight relationship, and that was great, but that led me to ignoring all the parts of myself that I didn’t think were digestible for my partner at the time, who ended up becoming my fiancé.

The singer also stated in the interview with The 19th that they believe their gender journey will last “forever.”

And I have a feeling that it’s not going to ever go back to one way or the other, but it’s about keeping it open and free and just I’m a very fluid person, and so that goes with how I express myself as well.

Before calling it quits in September 2020, Lovato dated Ehrich for nearly seven months.

In July, Lovato shared a message on their Instagram account in which they asked people to gender them correctly but they totally understood if people made a mistake.

“If you misgender me, that’s okay,” Lovato wrote. “I accidentally misgender myself sometimes! It’s a huge transition to change the pronouns I’ve used for myself my entire life. And it’s difficult to remember sometimes!”

“As long as you keep trying to respect my truth and as long as I remember my truth, the shift will come naturally,” they continued. “I’m just grateful for your effort in trying to remember what means so much to my healing process.”

Happy birthday @ddlovato !! You’ve been setting the trends and calling the shots ever since we were kids and I hope you continue to unapologetically be YOU!! Once a badass.. ALWAYS A BADASS ? pic.twitter.com/73bcEOs8V3

Today is Demi Lovato’s birthday. Demi Lovato, who was born on 20th August in 1992 in New Mexico, was destined for a career in show business! Demi’s mother, a former Dallas Cowboys cheerleader, began enrolling them in music, dance, and art classes when they were four years old, and by the age of ten, they were proficient with both the piano and the guitar.

Lovato’s first role was as Angela on Barney and Friends when they were just seven years old, long before Camp Rock and As the Bell Rings. Let’s celebrate this newly 28-year-old in style, from Disney to Barney, and their successful solo career!

How to watch Disney Plus on Roku in 2021

How to Watch “What If…?” on Disney Plus