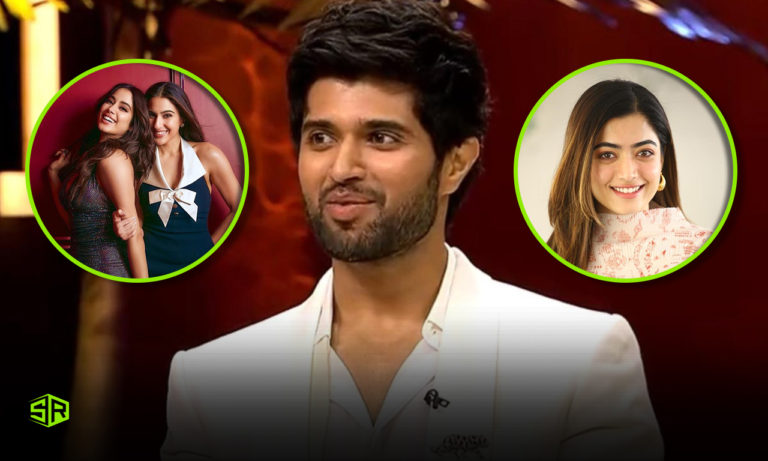 Vijay Deverakonda is rumored to be dating Rashmika Mandanna ever since he appeared in Koffee With Karan Season 7 and talked about her on the show.

Confronting Vijay Deverakonda, Karan Johar inquired about the dating rumors surrounding him and Pushpa star Rashmika Mandanna. Vijay dealt with the question head-on and stated, he’s ‘good friends’ with her. Followed by:

“We have done two films together at a really early stage in my life. She is a darling and I am really fond of her. We are really good friends. We share so much through films, lots of highs and lows. A bond gets created.”

Addressing why he’d rather not disclose his relationship status, Vijay said:

“I will say it out loud; until then I would not like to hurt anyone who adores me. So many people love you as an actor and have your poster on their walls, on their phones. They give me so much love and appreciation; I don’t want to break their hearts.”

On Koffee With Karan Season 7, Vijay Deverakonda won the gift hamper on the show during the Rapid Fire round in one go. Although, there were a lot of cheesy conversations that made the cut.

KJo teased Vijay by asking him if he liked “cheese” while cheekily referring to the previous episode in which Sara Ali Khan and Jhanvi Kapoor both nearly confessed about having a crush on the actor and referred to him as “cheese” in the rest of the episode.

Vijay replied: “I am scared about where this is leading.” His Liger co-star who accompanied him for the episode, Ananya Panday said, “This was Hunger Games.”

However, Vijay complimented the ladies by saying, “They are really kind and sweet.” KJo also asked him, who does the actor find “more hot” among the two; he simply replied, “They are both attractive, young women.” About Jhanvi, he added, “She is an adorable girl, and I have met her a couple of times.”

As the Rapid Fire went on, Vijay was asked to name the most desirable woman in the country. He promptly said, Samantha Ruth Prabhu. Next up, he was asked to describe the mentioned celebrities in a single word. For his Kushi co-star Samantha, Vijay said, “She is a darling. She is amazing. An incredible woman.”

For Sara Ali Khan, he said, “witty and funny,” and for Jhanvi Kapoor, “cute.”

In one of the previous episodes, KJo inquired from Sara to “name a boy you feel like you want to date today.” Although Sara was a bit hesitant, she eventually said, “Vijay Deverakonda.” In an episode of Koffee With Karan 6, Jhanvi also confessed to having a crush on Vijay Deverakonda.

The majority of the ladies in Bollywood can’t help falling for Vijay’s charms:

Vijay Deverakonda’s debut movie was Nuvvila in 2011. However, his breakout role in 2016’s Pelli Choopulu won many hearts. A few of his best works have been Ye Mantram Vesave, Arjun Reddy, Geetha Govindam, Nadigaiyar Thilagam, Dear Comrad, and Mahanati.

He was last seen in the movie World Famous Lover.

Vjiay Deverakonda and Ananya Pandey starrer movie Liger is all set to release on 25th August 2022.