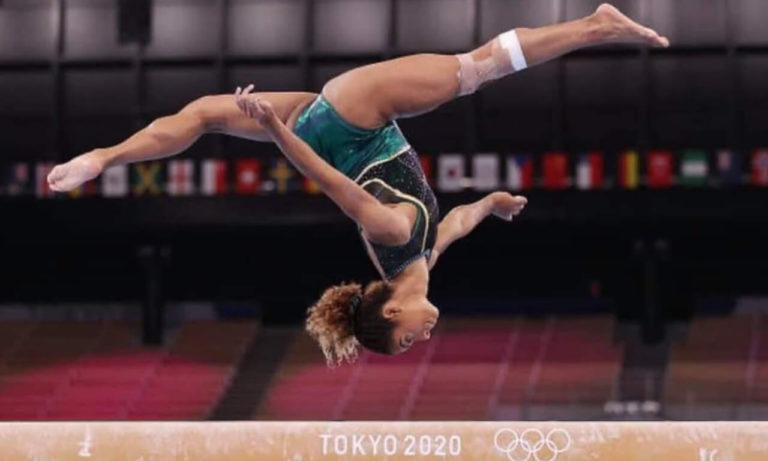 The 27-year-old artistic gymnast, Danusia May Francis did not let adversity stop her from fulfilling her dream of becoming an Olympian despite a serious injury obstructing her path.

Representing Team Jamaica at Tokyo Olympics 2020, Danusia Francis suffered a devastating knee injury during her training session, a torn ACL, and it was obvious that she would not be able to compete in the competition.

However, the 27-year-old athlete did not back down from pursuing her dream, and she did compete on the uneven bars on Sunday. With her knee fully strapped, Francis came out bravely, performing a 10-second routine, which was a truly heroic move.

We couldn’t be more proud of Danusia’s strength.

Francis shared the news of her injury on her Instagram with a caption that read, “Just competing bars due to my knee injury. But can’t wait to get out there!!”

It was an emotional performance, not only for the athlete but for the viewers as well. There have been incidents in the past Olympics where injured athletes have competed and even won at times; this makes for a praise-worthy addition to the list.

The British-born Jamaican athlete’s performance — despite her injury — shows how determined she was to become an Olympian.

Francis was a reserve for Team GB in the 2012 Olympics, and she had waited since then to become an Olympian. However, her smile after her performance showed that her dream of becoming an Olympian has finally come true despite the setback. It is indeed a brave and inspirational moment in the history of the Olympics.

After performing on the bars, Francis shared a short video of hers from the event, with the caption:

“I am officially an Olympian. I have waited a long time to be able to say that. ?”

“The competition might not have been exactly how I imagined it. But the spirit of the Olympic Games was everything I could have hoped for. I have torn my ACL and will need surgery to repair it. Although I am devastated about this injury, I am glad I was still able to go out there, represent Jamaica, and fulfil my dream. This is the second time Jamaica has been represented in gymnastics, and I know this is just the beginning. To all the young gymnasts out there, chase your dreams!“

In her post, she thanked her family and team for the support,

“Thank you so much to my family, coaches, @jamaicaolympic @gymnastics_jamaica , @heathrowgymnasticsclub my friends, fellow athletes and absolutely everyone who has left a comment of support. I am truly feeling the love.”

And she also had wishes for other athletes competing in the Olympics,

“Congrats and good luck to my fellow Olympians for the rest of your competition! ♥️”

Jamaican gymnast and @uclagymnastics alum Danusia Francis injured her knee before the #TokyoOlympics.

If you thought that was going to stop her from competing, think again.

The Prime Minister of Jamaica ‘Andrew Holness’ also praised the 27-year-old athlete by posting on Facebook:

The official Instagram account of Team Jamaica later in the day, posted a picture of Danusia and sports psychologist ‘Dr. Jason Scott Hamilton’. The caption of the post read Dr. Hamilton’s words, that read,

“Danusia ?? your Mental Strength and Courage will be a part of Jamaica’s folklore and history for years to come. I am so proud of what you did for our country and your self. Thank you and Godspeed on a speedy recovery to a 100%”

The praise for the Jamaican athlete also came in from other journalists and former athletes:

On the slow replay, you can see the pain she’s in with that ACL injury. Wise decision on her part here. She has much to be proud of, and she clearly is. What a great smile. pic.twitter.com/1oAns7Hc7N

A Sportswriter for the Los Angeles Times ‘Helene Elliot’ commended Danusia, tweeting, “The smile on her face afterward was stunning. She realized her dream of being an Olympian and she kept that uppermost in her mind. Inspiring.”

Former UCLA standout Danusia Francis tried to compete on the uneven bars despite a torn ACL but she simply couldn’t do it. The smile on her face afterward was stunning. She realized her dream of being an Olympian and she kept that uppermost in her mind. Inspiring.