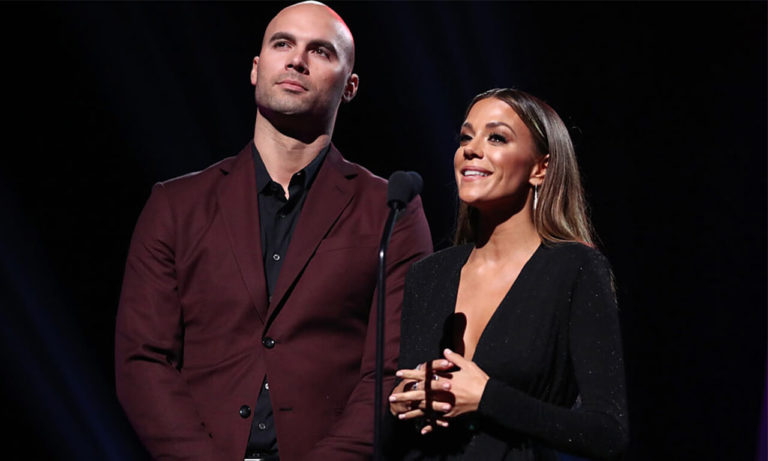 “It’s time. As I try to make sense of a reality I never wanted to believe could be possible again, those words have now become a reality,” she wrote on Instagram. “I’ve fought y’all. I’ve loved hard. I’ve forgiven. I’ve put the work in. I’ve given everything I have, and now I have nothing else to give.”
“Please know that I still believe wholeheartedly in marriage, love, and rebuilding. I just can’t fight any longer.  It’s time to heal,” she continued. “Thank you for all the love, heart, and support, in many ways you have fought on this journey alongside me, and for that I am grateful. I’ll always encourage you to continue the good fight, but you can’t fight it alone. ?”

In addition to being responsible for their own legal fees, Kramer and Caussin will each be awarded one of their two joint bank accounts. While the athlete will keep his 2013 Ford F150 Raptor, she will maintain control of her two businesses, Sophia Dog Inc. and Moms and Babes LLC.

The actress and the former NFL player are parents to a 5-year-old daughter, Jolie, and a 2-year-old son, Jace, whose custody both of them were previously reported to be seeking. Kramer also recently spoke about her daughter being “aware” of their split, as one of the kids exclaimed “Daddy and Mommy Have Different Homes!” when Caussin moved out of their home.

In exchange for all the baggage, pain, and suffering caused by her husband, the One Tree Hill actress and country singer will be paying him a total of $592,400 as settlement of any claims. Well, all good things come with a cost, so we’re truly hoping it’ll be good riddance of bad rubbish for her — even if it requires her to pay that hefty amount of money for it.

How Common is Cheating in the US?

According to CompareCamp, a study shows that “20% of married couples are likely to encounter infidelity”. And it is safe to say that the number is probably much bigger, but we’ll never reach an accurate figure because of the shame associated with the concept of cheating. Regardless, infidelity is much more common than we’d think, and it can happen to anyone.

So, it comes as no surprise that — after struggling with her deeply problematic marriage of six years — Kramer finally decided to end the relationship as she (and even Caussin himself!) realized and admitted that things were not going to change. She referred to the marriage as “a terrible nightmare” that she “wouldn’t wish on anyone” in an essay on Good Morning America.

What Might Jana Karmer’s Breast Implants Have to do with it?

Another interesting thing to coincide with the event of this divorce is her newly done breasts — which she flaunted in an Instagram post five days ago. Speaking with Extra in an interview about the devastating course of events, she called her body a “divorce body.”

Victims of cheating partners often tend to suffer from declining self-esteem and other body image issues. Therefore, it could be a possibility that Kramer suffered from something similar because of her husband’s despicable behavior.

In a heartbreaking Reddit post, for example, a user shared how her cheating husband destroyed her mental health.

The Split Doesn’t Come as a Surprise, Though

Back in 2016, around five years ago, Kramer had separated from Caussin “for undisclosed reasons”. Us Weekly, however, broke the news that Caussin had been cheating on his wife with multiple women, and that’s the reason he had gone to seek treatment; they renewed their vows in 2017.

Later, in an interview with RuPaul Charles two years ago, the couple openly talked about his “sex addiction” — and no matter how much Kramer laughed during the interview, it was quite evident that it wasn’t a problem that would be so easily sorted.

To conclude, the decision taken by Jama Kramer is in the best interests of her children and her own wellbeing. A painful relationship that brings you no joy and damages you is better dissolved.

As she said and we repeat, I’ll always encourage you to continue the good fight, but you can’t fight it alone.”