Kate Beckinsale Reveals Her Cat Clive is ‘a cancer survivor’, had 9 months of chemo 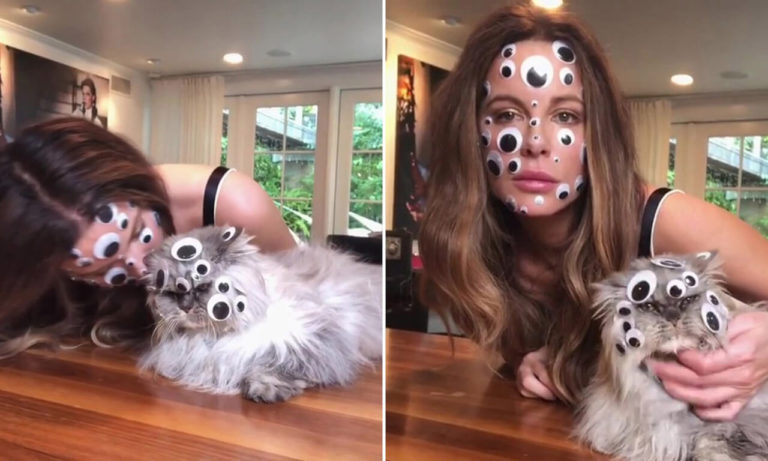 Kate Beckinsale’s 4.7 million insta followers and fans were in for a treat yesterday (Wednesday, June 30th, 2021) when she shared the cutest little clip of her cat, Clive, watching her in an Entertainment Tonight interview about Jolt, her upcoming film on Amazon Prime.

Dressed in a bowtie and a hat, Clive looked serious and stoic as ever. And if that alone wasn’t enough to grab the viewers’ attention, the 47 year old actress revealed that he was actually a Cancer survivor.

“Yes, he had nine months of chemo, I didn’t think he was gonna make it. So, the fact that he’s become this minor cat celebrity, I’m down!” she told ‘Entertainment Tonight’.

It is estimated that one in five cats are likely to develop cancer as they grow older. Needless to say, everyone in the comment section — especially pet parents — began smothering furry little Clive with more praise and love than ever after learning about his success story of strength and conviction.

Even singer Wes Mack commented with a trophy emoji and wrote: “Rising Star right there. (the cat of course) (sic)”

The way Clive just sits like a good little boy with furrowed brows (typical cat expression, we know!), focusing on his hooman and himself in the video… it’ll steal anyone’s heart!

Unable to resist his squishy little face, Kate says, “Who’s on TV?!” as she lets out an excited, endearing squeal (typical of cat mums, we know) and kisses him.

And sometimes, that’s all we need to see on the internet to help us forget all our worries for a little while.

The clip got so much attention that it even took Twitter by storm, with someone suggesting Kate should have a movie of her own with Clive, just like Keanu Reeves has the dog movies, Nicolas Cage has the pig movie:

Okay Keanu Reeves has the dog movies, Nicolas Cage has the pig movie…can Kate Beckinsale have a cat movie?? pic.twitter.com/yXEUU5qCRT

“He’s really down to wear costumes, he’s down to do a little dance, he’s down to do some boxing. I guess everyone’s cat isn’t like that so people like seeing it. He deserves it. He’s a cancer survivor.”

You can watch the full video here:

Clive is slowly turning into an internet sensation, and considering Kate has been criticized for posting about him earlier, it’s great to see him bagging all this well-deserved attention.

Earlier this year, she had shared a funny photo of Clive in a baby sling, which didn’t quite receive the kind of response she had probably expected.

“You pride yourself on being eccentric, the whole thing smacks of too much effort (sic)”

To which she snapped back:

However, the universe regained its balance when another user was amused by it (as was meant to), and compared Clive to “a sexy slender man” — to which Kate happily responded:

“Literally what I was aiming for.”

It’s truly delightful that, after such a huge loss, the English actress has been saved from another loss and heartbreak.

Did you watch the video? Was it the best, most wholesome thing you’ve seen today or not? Let us know in the comments!