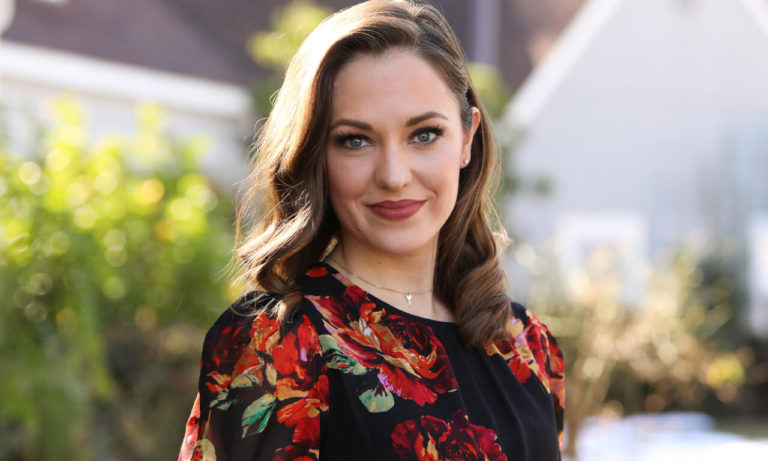 Despite the increasing death rate due to covid-19 worldwide, Laura Osnes is determined and stands by her decision of not getting vaccinated.

The famous Broadway star has denied all rumors lately circulating in the media regarding her being fired from an upcoming theatre production.

The 35-year-old star responded to a report, shared on Page six, claiming her removal from a one-night-only performance. According to the report, she was removed from the recent theatre performance of Crazy for You at Guild Hall in East Hampton because of her vaccination status.

“The article reports erroneous allegations that have generated a firestorm of negative conclusions and comments. It is important to me to clarify what actually happened.”

She further explained that she was hired to perform in the production back in May, but was told in June that the protocols had been changed and she would need proof of vaccination to participate.

“I was disappointed but responded that I would have to withdraw, as I have not yet gotten the vaccine.” 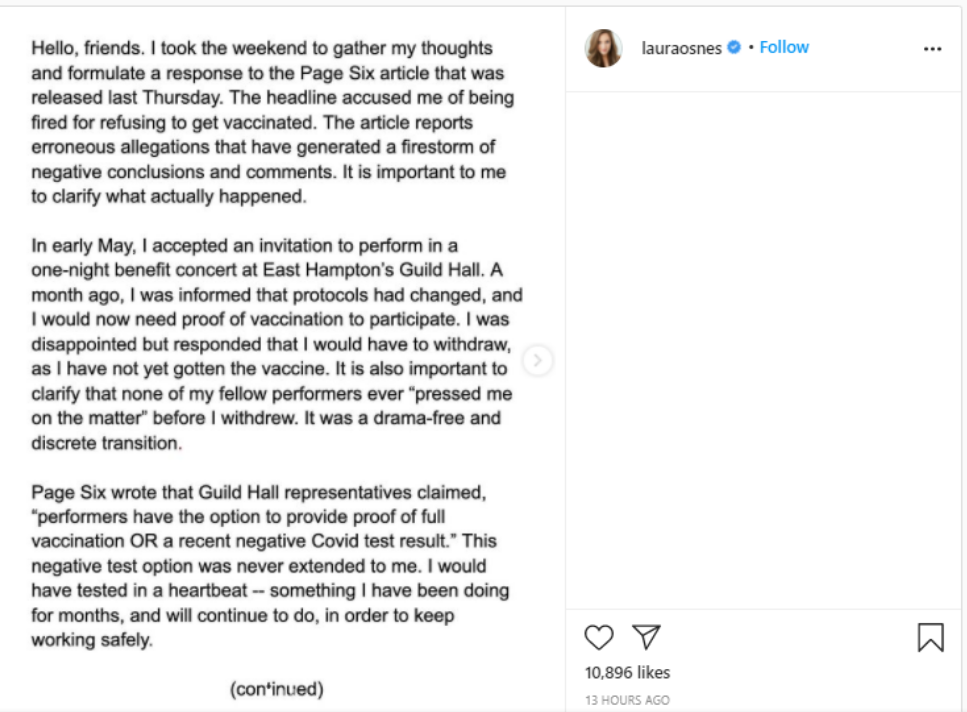 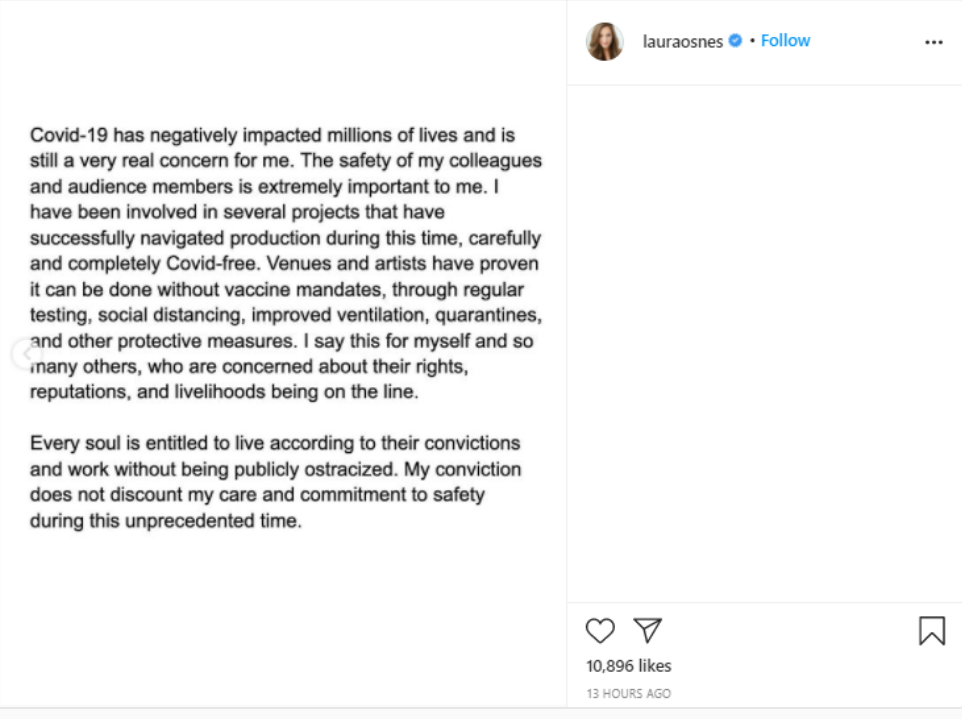 According to Page Six’s previous reports, Osnes only shared her vaccination status after being compelled by a costar in the musical, which is being directed and choreographed by Susan Stroman.

However, Osnes refused the report and said any of her costars never pushed her on the matter before she withdrew.

She said, “It was a drama-free and discrete [sic] transition.”

She further said in her post that she was never given an option of providing a negative test, contradicting Page Six reports. According to their reports, Guild Hall’s representative told them that the venue required both performers & staff to be either vaccinated or provide a negative Covid test result.

She said, “I would have tested in a heartbeat — something that I have been doing for months, and will continue to do so, in order to keep working safely,”

Osne withdrew from the production after The Broadway League announced that vaccinations would be mandatory for performers, staff members, and backstage crew in all 41 theatres in New York City once they start reopening next month.

The organization also mentioned that the audience would have to show their vaccination status before entering the venue. In addition, all attendees must wear masks at all times. However, they can remove masks while drinking or eating in the designated area.

These instructions will last throughout October, though they may relax in the later months “if the science dictates,” the organization confirmed in a news release.

In another statement, Osnes explained that she “stands by” her decision of not getting vaccinated. She further told her fans that it was her decision that she and her husband made with input from their physician for themselves, their family planning, and their future.

He further added, “Why are we working around y’all? If you’re in danger, stay your ass inside. I’m tired of wearing the m*****f***ing mask.”

According to the Center for Disease Control and Prevention, “COVID-19 vaccination is recommended for all people aged 12 years and older, including people who are pregnant, breastfeeding, trying to get pregnant now, or might become pregnant in the future.”

“Pregnant and recently pregnant people are more likely to get severely ill with COVID-19 compared with non-pregnant people. Getting a COVID-19 vaccine can protect you from severe illness from COVID-19.”

Basically, researchers have found that vaccines are safe, and that there is no link between vaccines and autism.

Have you gotten vaccinated yet? Let us know how your post-vaccine experience has been in the comments!