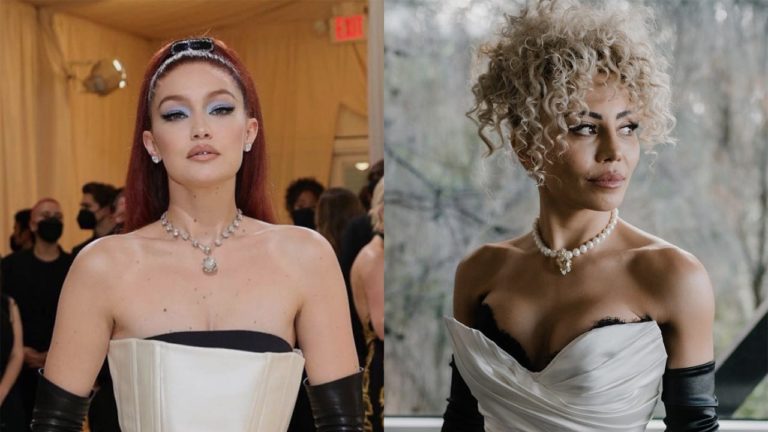 Lillian Khallouf, an Australian fashion designer, claims that supermodel Gigi Hadid “stole her look” at the Met Gala 2021 this week.

In a custom-made gown by Prada, Gigi, 26, made best-dressed lists all around the world as she arrived at the star-studded event.

Lillian, who lives in Sydney, posted on Instagram after photographs of Gigi’s gown leaked online, claiming the outfit was a replica of the dress she wore to her own wedding.

Posting a series of photos comparing the two looks, Lillian wrote: “When @gigihadid steals your look at the #METGALA.“

“Thanks @prada @mimicuttrell I’ll take that as a major compliment,” she added.

A layer of black fabric poked out from beneath the bodice, and at the back, a train of black and white fabric dropped to the floor.

Gigi’s gown, too, had a strapless white corset bodice with black cloth poking through.

Of course, there were obvious differences between the two looks: Lillian wore her hair in a curled up-do, while Gigi had her hair in a long, wavy ponytail tied with a hair clip.

The backs of the gowns are also noticeably different, with Lillian’s having a dramatic train and Gigi’s having a thigh split.

Despite the obvious contrasts, many of Lillian’s followers wondered if Gigi’s Met Gala outfit was inspired by Lillian’s dress with one commenting: ‘When I saw her dress I thought of your wedding dress instantly! Yours is so much better!”

“I still can’t believe this Lil! Down to the gloves and the necklace! “ another fan wrote, while someone else added: “You definitely wore it better,” another added.

Later on Tuesday, Lillian took to Instagram to express her gratitude to her fans, saying that she was unconcerned about Gigi’s supposed “imitation.”

“To everyone who shared, commented and sent supportive DMs, you guys are the best! I’m so grateful to have such a wonderful community of people who not only back me but creatives in general,”

“The truth is I’m not mad about what happened today. I feel extremely proud and flattered. It’s interesting how… talent echos. I heard it all my life and today is a testament to the saying, ‘Imitation is the sincerest form of flattery,” [loved-up emoji].

It comes as a shock every time we see a stylist copying someone else’s design in the name of “inspiration”. However, we can’t make any conclusive comments over the matter until we hear from the celebrities and their designers.

Since Daily Mail Australia was the one to originally report this news, let’s wait and see what comments Prada and Gigi’s stylist have to offer over the matter.