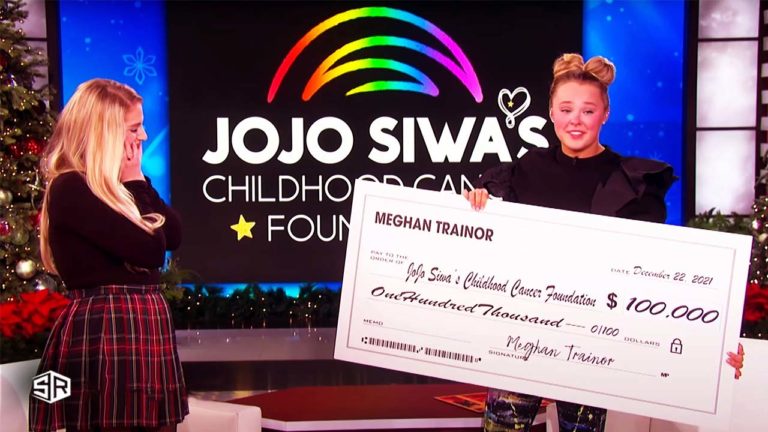 Last Wednesday, the guest host for The Ellen DeGeneres Show, JoJo Siwa got all emotional when the Grammy Award winner Meghan Trainor surprised her and made a grand donation of $100K to her childhood cancer foundation which launched earlier this month.

After presenting the cheque, the 28 years old American singer-songwriter explained, “I’ve met a lot of fans who are going through that with their family members”. She added further “It’s very hard, and so, I appreciate you so much for doing that, and I’m so beyond proud of you and I worship you. And I wanted to make a donation.”

Seems like this year, for JoJo Siwa and the Childhood Cancer Foundation, Christmas came earlier.

For the new organization of The Time 100 candidate, it was the biggest donation that has been made till now, as she took the place as the guest host for the show. She had her friend, Meghan Trainor come to The Ellen DeGeneres Show on Wednesday’s episode who graced her with the donation.

“I watch your show every single day, but I watched the episode where you talk about the JoJo Siwa Childhood Cancer Foundation, and I worship you,” Trainor expressed. “I’ve met a lot of fans who are going through that with their family members. It’s very hard, and so, I appreciate you so much for doing that, and I’m so beyond proud of you and I worship you. And I wanted to make a donation.”

Trainor presented Siwa with a huge cheque of $100,000, which made Siwa teary-eyed. “I’m not crying, I swear,” the Dance Moms star said on a lighter note.

It’s been a solid 12 hours since I’ve cried, but this means so much. Thank you! This is going to help so many kids. I had no idea about this, I’m so caught off guard.

This is the biggest donation that we’ve had yet to the charity.

Siwa inaugurated the non-profit earlier this month, stating that it was “something I’ve been wanting to create for YEARS.”

“Throughout my years of being in the public eye I’ve met hundreds of kids and families affected by childhood cancer and every single one of them has a piece of my heart!” she wrote in the announcement.

I’ve been working on creating this foundation to help make kids who have been diagnosed with cancer have a better life. I wanna re do hospital rooms, take them on trips to Disney, surprise a whole pediatric hospital with new playrooms, anything to just see kids smile!

I will also be using this foundation to donate to families affected by childhood cancer to help with the costs of everything.

Trainor who appeared on The Ellen DeGeneres Show last week showed her gratitude on her Instagram saying: Best bday ever! Thanks for having me @itsjojosiwa and @theellenshow ???