Mrs. Sri Lanks Gets Her Crown Snatched by Mrs. World Over Divorce Claims 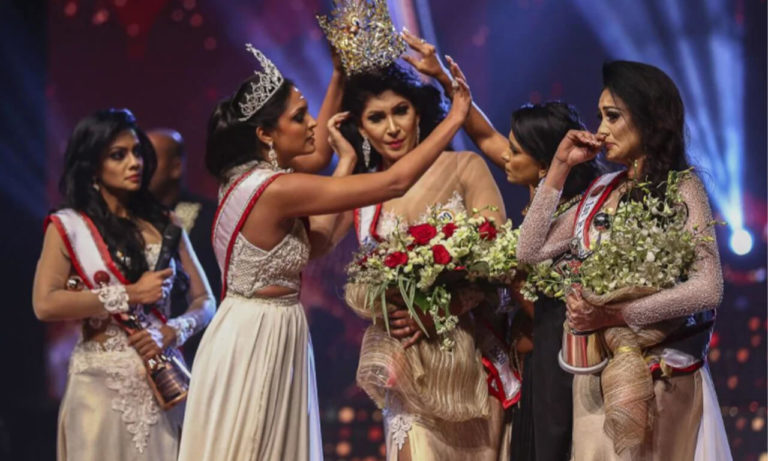 Pushpika De Silva, the winner of Mrs. World Sri Lanka got her crown snatched by last year’s winner Caroline Jurie in the ceremony after De Silva was believed to be divorced.

According to the rules of Mrs. World, all participants must be married, and since De Silva was alleged to be divorced, she got disqualified from the title.

The Sri Lankan beauty was awarded the title of “Mrs. Sri Lanka” on Sunday in a ceremony that was broadcast on national TV. Just after she won her crown, she began enjoying the celebratory moments, and the pageant’s 2019 winner, Caroline Jurie, snatched her happiness by taking off her crown.

Jurie told the audience, “There is a rule that prevents women who have already been married and are divorced, so I am taking steps to make the crown go to second place.”

The video above shows the former winner who went up to De Silva, grabbed the crown, and placed it on the runner-up’s head. Pushpika claimed to get head injuries when her crown was forcefully removed.

“My dear, loving, respectful, intelligent Sri Lankan and people of the world,

I know you are expecting my response to the unexpected incident that happened. Even though I have a lot to say, I will post only the essential things here.

Firstly, I would like to give my respect and thanks to the judiciary for choosing me as the winner of the 2020 Married Beauty Queen Crown.

Secondly, as I think, for the first time in the history of the beauty queen not in Sri Lanka but the world, even though my crown has been snatched in front of everyone insult-fully, I will keep my head straight at this moment of writing and say that I am proud and proud as before.

Me, myself, and this is just another incident for me.

The pain of my skull when my crown was snatched from my head by the world married beauty queen, the pain I felt when I lost the crown is more than both “.. Mother’s head is injured, right..? Does it hurt mom?” I can’t bear the pain I feel when my son listens.

But, this is a historic moment for me as a single woman, where women and men worldwide raise their voice behind the party, color, religion, caste, and division. I say this love from all of you is a giant strength to me.

Also Read: Kate Winslet Reveals that She Keeps her Oscar in her Bathroom

If I were a divorced woman, I would dare them to submit my divorce scripts. I haven’t hidden from the world that I’m with my child. I also have personal reasons to be that way. But, being apart is one. Divorce is something else. I’m still a un divorced woman.

If I wasn’t fit at the beginning of this tournament, they could have removed me. They weren’t sleeping until I came so far after the remaining game events.

De Silva claimed that she is not a divorced woman, and if she had been divorced, she would not have participated in the pageant in the first place.

Daily Mirror Sri Lanka shared a video of Pushpika talking to police after the event happened outside the theater.

Crowned and uncrowned winner of Mrs. Sri Lanka 2021 speaks to the police outside the Nelum Pokuna Theatre last evening after the pageant has ended. pic.twitter.com/iJhyACoCBl

Later, it was found that Pushpika has not actually been divorced, and the organizers apologized to her since she is not a divorcee and has only separated from her husband.

She has also planned to take legal action against the organizers. The national director of Mrs. Sri Lanka World, Chandimal Jayasinghe, said, “It was a disgrace how Caroline Jurie behaved on the stage, and the Mrs. World organization has already begun an investigation on the matter.”

De Silva was later crowned again on Monday as the organizers cleared that a contestant cannot be disqualified if she is just separated, not divorced.

The newly crowned Mrs. Sri Lanka said that there are mothers like her who are going through a lot, and the crown is dedicated to all such women and single moms who are struggling and doing their best to raise their children alone.

She added that she had forgiven everyone as she has been taught to love and not hate. She said that people gain nothing from jealousy, and it all ends in vain.