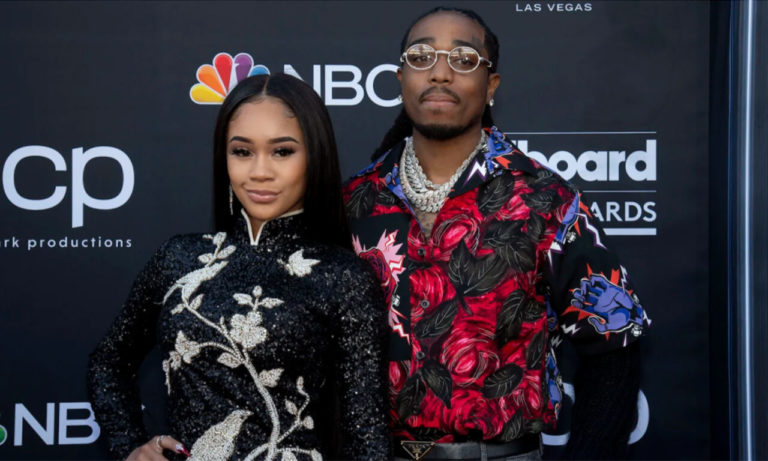 Quavo has finally spoken after the leaked ‘Elevator Fight Footage‘ went viral, in which he and his ex-girlfriend Saweetie can be seen fighting in an elevator.

He said that he has never physically abused Saweetie and that he and his ex have both learned their lessons and decided to move on from the 2020 incident.

Speaking to People, he said, “We had an unfortunate situation almost a year ago that we both learned and moved on from. I haven’t physically abused Saweetie and have real gratitude for what we did share overall.”

When the video begins, Saweetie swings in front of the elevator door at Quavo. He turns to her and throws her into the elevator, and starts a physical fight with her. Both of them were seen fighting over an orange case. Quavo stands with his backpack, and the case as Saweetie is seen lying helpless on the floor.

The elevator’s door closes, and Quavo presses a button, then the door opens on a different floor. Although Quavo seems to carry the bags out to make space for a man outside of the elevator, the guy does not do anything because the ex-couple stays in the lift, and the door shuts.

After the door opens, Saweetie does not get up, and Quavo uses the case to block the door open. Saweetie eventually gets up and leaves the lift.

Quavo dated Saweetie for three years until their shocking breakup in March 2021.

The couple first ignited romantic rumors after Saweetie was featured in the music video for the single ‘Workin Me‘ by Quavo. They made their first public appearance as a couple in Sep 2018.

Quavo has already confirmed that in March 2018, Quavo leaped to his shot at Saweetie’s Instagram DM, referring to her hit-single ‘ICY GRL.’

Quavo admitted that he sent Saweetie a snowflake emoji on her Instagram, to which she answered with a bowl of noodles, a reference to ‘Stir Fry,’ a song by Migos. Quavo replied, “u so icy, Ima glacier boy,” before Saweetie replied, “was hannin then.”

Quavo tweeted that he had disappointed Saweetie, as he misunderstood her, and wished her the best.

I had love for you and disappointed you did all that. You are not the woman I thought you were. I wish you nothing but the best ??.

Saweetie also spoke up on the incident saying, “This unfortunate incident happened a year ago, while we have reconciled since then and moved past this particular disagreement, there were simply too many other hurdles to overcome in our relationship and we have both since moved on. I kindly ask that everyone respect my privacy during this time.”

The week previous to the video’s release, Saweetie revealed that she and Quavo had separated as she admitted to infidelity.

I’m single. I’ve endured too much betrayal and hurt behind the scenes for a false narrative to be circulating that degrades my character. Presents don’t band aid scars and the love isn’t real when the intimacy is given to other women.

She announced a peaceful exit from the relationship in a tweet and showed excitement for the new chapter of life.

I emotionally checked out a long time ago and have walked away with a deep sense of peace and freedom. Excited for this new chapter of elevation ??

Also Read: Johnny Depp ‘Did Not Get Fair Trial’, His Lawyers Argue at The Appeal Court