Queen Elizabeth II will be Remembered as ‘A Guiding Light’: Thoughts by James Corden, Trevor Noah and Jimmy Kimmel 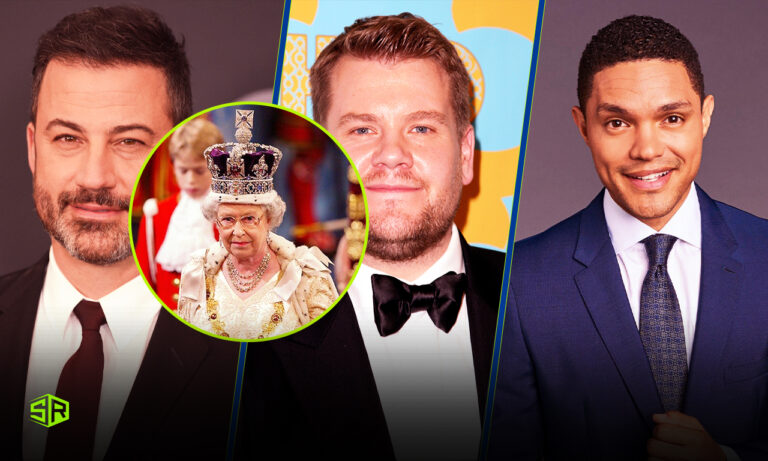 Thursday Late Night’s broadcasters paused their programs to pay tribute to Queen Elizabeth II, who passed away at the age of 96.

Queen Elizabeth II passed away peacefully on Thursday at Scotland’s Balmoral Castle, according to the royal family. She will be succeeded by her firstborn son, Charles, after 70 years of rule.

James Corden, the British host of The Late Late Show, said that he was “also so thankful and grateful to the queen for the most incredible service and leadership that she has shown during all of our lifetimes. ” despite his sadness over the news of her passing.

“She is the only queen most of us have ever known,” Corden said. “We viewed her as immortal and essential part of the fabric of our world.”

The late-night host continued by emphasizing how “universally adored” Queen Elizabeth II was. He said,

She represented good in this world, living a life of honor, a life dedicated to service, dedicated to bettering the life of others. And it’s always felt as if she was there for all of us, for 70 years she never wavered. She was never political. She didn’t need us to hear her opinions. She never gave an interview, she never posted on social media. It was never for her about her own PR, and maybe that’s why she was as beloved and respected by a president as she was by the guy who lives down the street, and she would treat both of them equally too. It didn’t matter who you were, she was there for you.

Queen Elizabeth II, according to Corden, was “always the queen” and “a guiding light” while living in “a world of uncertainty” and “instability” She was “always polite, always dignified, always a brilliant model of leadership.” In a world where it frequently seems like the ground is trembling, she stood for steadiness. Elizabeth the Queen is special. A life’s work that will never be recreated.

The queen’s death, according to Corden, will “change our country forever,” and he thanked her for her “sacrifice,” saying, “We will always celebrate her life, remember what she stood for, and we will always be thankful for her sacrifice.”

The official Twitter account of The Late Late Show with James Corden shared a short clip of the show.

The host of The Daily Show, Trevor Noah, who was born in South Africa, a nation that was formerly a part of the British Empire, started his remarks about the queen by outlining the many responses he witnessed to her passing.

It’s been interesting to see how varied the reactions to this news have been,” Noah said. “You know the full spectrum of emotions — everything from ‘How will the kingdom carry on?’ all the way to ‘You shouldn’t have colonized India, bye bitch.

Whatever one may think of Queen Elizabeth II, the late-night host emphasised how impressive it is that she held the monarchy for such a long time. One of the longest-reigning monarchs in history, Her Majesty assumed power in 1952.

“That means she’s seen Adam West as Batman, Michael Keaton as Batman, Christian Bale as Batman, Ben Affleck as Batman, survived that, and then saw Robert Pattinson as Batman, Noah joked. “And look, I’m sure there’s a better way to measure time than in Batman, but you get it. She’s been in the game for a minute.”

The host continued by joking that she was a true queen and that the term is used far too frequently these days. “You just post a photo of your smoothie online, and everyone’s like ‘Yeah, self-care queen,’” he said. “No, that doesn’t make you a queen. You’re a duchess of self-care at best.”

Noah concluded his segment on the queen by discussing Charles and how he will now assume the throne, making fun of the fact that he is 73 years old and has held the same title as his grandchildren up until now.

Queen Elizabeth II has passed away and the reactions have been, let's say, varied. pic.twitter.com/w7u5jDtQV2

On Jimmy Kimmel Live! Jimmy Kimmel also dedicated a portion of his opening monologue to this topic to talk about the news. He linked the queen’s death to what Kris Jenner’s death would be like. “The queen is known as England’s rock and we don’t have a rock. The closest thing we have to a rock in America is the Rock,” he said.

Queen Elizabeth II met numerous people during her 70-year reign, including Lady Gaga, Bill Clinton, John F. Kennedy, Jennifer Lopez, the Blue Man Group, the Beatles, and the Spice Girls, to name just a few, according to Kimmel. Before displaying a picture of her standing behind Donald Trump, Kimmel continued, “She stood up to fascists and she stood behind them.”

Watch the glimpses of the Jimmy Kimmel Live show.