Quinta Brunson Wins Her First Emmy, the First Solo Black Woman to Win for Outstanding Writing for a Comedy Series 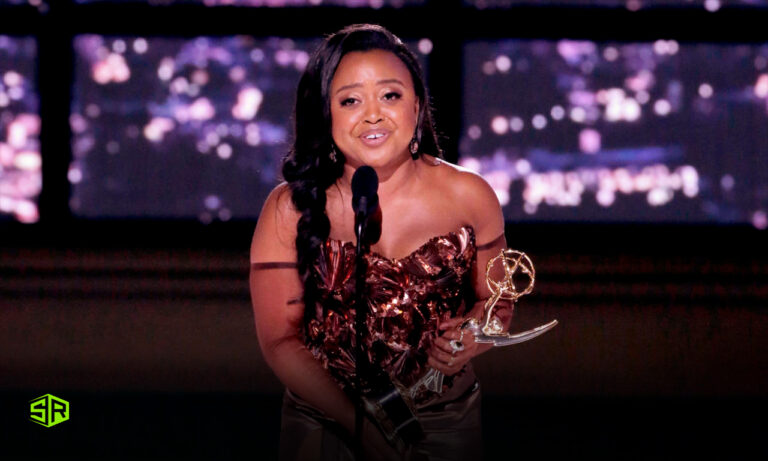 Quinta Brunson won an Emmy for Outstanding Writing for a Comedy Series, making her the second Black woman to win it, and ABC’s well-received sitcom Abbott Elementary created by her, is the reason.

Brunson, who is native to Philadelphia won her Emmy on the 12th of September for her fantastic writing for the popular sitcom series Abbott Elementary. Before her, Lena Waithe won this award for her writing on Master of None in 2017, which she shared with Aziz Ansari making Brunson the first solo and second black woman to win an Emmy in this category.

Brunson looked stunning in a Dolce and Gabbana metallic gown as she walked the gold carpet. She thanked Warner Bros, ABC, Fox and Disney after receiving her award and said:

It takes that many people to make a television show. I need to say thank you to Justin and Patrick, my co-showrunners, for believing in a story from four years ago.

She further showed gratitude to Larry Wilmore for supporting and mentoring her, and in her words…

for teaching me to write television as well as he did.

While giving an interview to E!s Live from Red Carpet, when inquired about her amazing Emmys look by the host Laverne Cox, Brunson shared what inspired it:

It’s TV – everyone wears makeup – but I was excited with Janine [Teagues] to show someone who is not that good at makeup. She already has a unique sense of style, and that’s something that people at first were really apprehended by, but then really charmed by, and I think that’s really sweet.

Entertainment Tonight shared Brunson’s win on Twitter with pictures of the star holding her award with the caption:

“#AbbottElementary star Quinta Brunson is the third Black person, and second Black woman, to win in the Outstanding Writing for a Comedy Series category. #Emmys”

#AbbottElementary star Quinta Brunson is the third Black person, and second Black woman, to win in the Outstanding Writing for a Comedy Series category. #Emmys

The show Abbott Elementary, a mockumentary-style series that premiered in 2021, is the story of Janine Teagues, a second-grade teacher at Abbott Elementary. She portrays a dedicated teacher working at the underfunded school focused on making her students succeed by helping them in whatever capacity she can.

Quinta Brunson not only wrote and created the show but also plays the leading role of Janine, for which she also got nominated in the category of Outstanding Lead Actress in a Comedy Series. Along with her, the show’s cast includes Tyler James Williams, Chris Perfetti, Lisa Ann Walter,  Sheryl Lee Ralph and Janelle James. Sheryl Lee Ralph also won an Emmy for her performance in the show by winning the award for Outstanding Supporting Actress in a Comedy Series.

Actress, writer and comedian Yvette Nicole Brown showed her love and support for Quinta Brunson on Twitter by sharing one amazing detail about the show and its cast:

Learning that the @AbbottElemABC team gave their entire #Emmy’s promotion budget to schools in need should tell you all you need to know to celebrate and support @quintabrunson and the show! #love

Variety shared a clip on their Twitter showing an enthusiastic Tyler James Williams sharing his happiness over Quinta Brunson’s win:

“I’m over the moon that everyone else can see what we saw for years.”

Tyler James Williams on #AbbottElementary co-star Quinta Brunson's #Emmys win: “I’m over the moon that everyone else can see what we saw for years.” https://t.co/oCuW5PAIfB pic.twitter.com/q5mqecRP3x

Viewers can watch Abbott Elementary on Prime Video, Apple TV, Hulu, HBO Max, and ABC. The show has a splendid 98% score on Rotten Tomatoes, with an overall audience score of 90%. Its second season will premiere on ABC on 21 September, and viewers can have a sneak peek at what to expect in this trailer.