R. Kelly Guilty on 9 Charges This Week – 5 of the Crimes Committed against Clary, Who Was Coached before 2019 Interview! 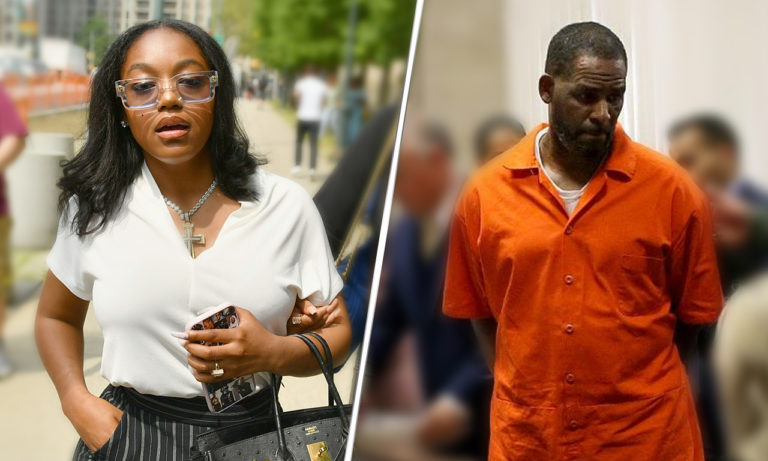 Azriel Clary, one of the numerous women who have testified against R. Kelly, is speaking out again about the abuse she suffered at the hands of the singer.  Kelly was found guilty of nine charges this week, five of which were related to the acts committed against Clary.

“It was very disturbing to have to relive those moments, “Clary said on Thursday’s CBS Mornings.

Beginning at the age of 17, Clary was physically and verbally assaulted by the singer, with part of her evidence being so detailed that the judge refused to allow it to be made public. For Clary, facing Kelly in court was part of the healing process.

“A piece of me was happy because I felt like this person no longer has control over me, you know? You don’t tell me what to do and what to wear and where to go and how long to be in a room anymore, “she told Gayle King.

Clary claimed that — despite the fact that many others tried to get her out of the toxic relationship — Kelly was “very good at manipulating the situation.”

In an emotional appearance with “CBS Mornings” on Thursday, Azriel Clary said the singer manipulated, intimidated, and coached her on how to act.

Clary, 23, was one of Kelly’s female roommates at his Chicago residence. She testified against him in his high-profile sex-trafficking trial in New York, which ended this week; and Kelly was convicted this week on charges of racketeering and violating the Mann Act, which prohibits transporting people across state lines “for any immoral purpose.”

“I was lost, and I felt invisible, and I gave someone that control over me to basically make me do whatever it was that they wanted me to do and act however they wanted me to act,” Clary told co-host, Gayle King, in her first interview since the trial.

Clary described how Kelly would manipulate her and other women, threatening to throw them “around this entire room” if he discovered they were planning an escape. Kelly allegedly tutored her and another woman, Joycelyn Savage, on what to say before a 2019 interview with King, which made global headlines when Kelly got out of his seat and forcefully rejected sexual abuse charges.

Clary said that before she and Savage sat down with King for the interview, Kelly “came in and he told us to be angry and upset,” adding: “So we came in angry. And I was scared because I was like I don’t want the world to see me this way, you know. I’m loving. I’m caring. I’m compassionate, and no one got to see that side of me.”

“Before that interview, he had us practicing every single day,” she said. “If he didn’t like our answer, he would tell us exactly what to say and how to say it. So any time you mention anything about sexual preference, we already know to say, ‘I’m not here to talk about that,’ because that’s what he told us to say every single time.”

Clary confessed to King that she lied about everything she stated during the 2019 interview. On Thursday, Savage and her reps could not be reached for comment.

When the interview was over, Clary said Kelly “was so happy.”

“What did he think about how he came across in the interview?“ King asked.

“Truthfully, I think he believed that he had done well. He felt like he had really made a great reflection of himself and where he was in life and how all these women were lying on him and how all these people were just, you know, out to get him. And, you know, that sympathy card that he just loves so much,“ Clary replied.

Clary is disappointed that the world didn’t get to witness her “caring” and “compassionate” side two years ago.

“And so I feel like that’s why it was important for me to come back here and see you again because it is OK to change your mind. It is OK to apologize and forgive yourself, more importantly. And that’s really what I had to do,” she concluded.

Kelly might spend the rest of his life in prison for his misdeeds. On May 4, 2022, he will be sentenced in federal court in Brooklyn.

So, what are your views about Azriel Clary and  R. Kelly? Do let us know in the comment section below.