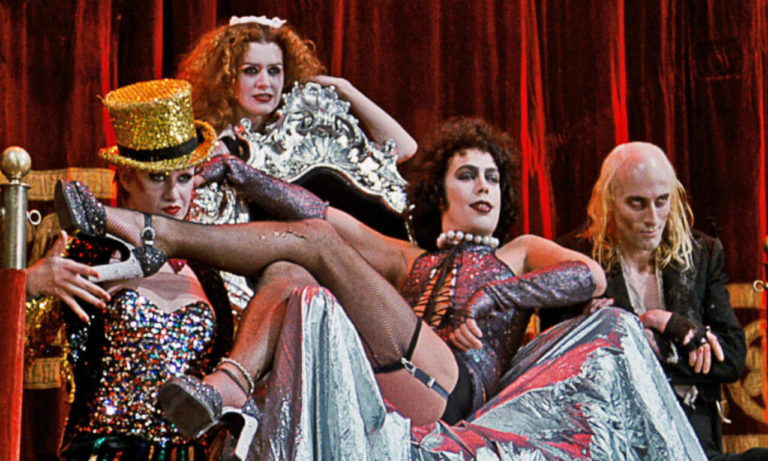 Released in 1975, The Rocky Horror Show initially failed to make a big name for itself and was a box office flop. However, the musical comedy started gaining recognition during the ’80s when the Waverly Theater in New York  City started late-night screenings.

What seemed to be a disaster, soon starting turning tables as it started enticing more people and eventually became a cult classic. To this day, the movie is remembered as one of the best musicals to have screened and it has been referenced in many other projects as well, which shows how popular it has become.

The story of this film was about a couple who are stranded due to a flat car tire in a storm and they take shelter in the mansion of a transvestite scientist namely Dr Frank-N-Furte. In the mansion, they get to meet some crazy and wild characters of which they have never ever heard of. The whole plot of this film is exceptional with some great musical scenes and a nice storyline.

The whole plot of a Trans scientist, with all the crazy costumes and use of fishnet stockings, was something you can call bizarre yet unique for the people at that time. The film became so popular that people started attending screenings dressed like the characters and bringing props. Not only that, but people also loved the songs in the movie as they danced to each of them.

The uniqueness of the plot may be the reason why this film could not do big in theatres initially but eventually, when people started to absorb the idea, the film became a classic hit. The story of the movie was not a horror movie as its name gives the impression, rather it was a film that caught people’s attention with the amazing dances and musical performances.

The Rocky Horror Picture Show has been running in midnight screenings all around the world for more than 40 years till now. Numerous productions and revivals of the film have been done over the past four decades in the USA, UK, Europe, New Zealand, Australia etc. This itself is proof of the popularity of this film. In fact, The Rocky Horror Show is the longest-running theatrical release in the film industry’s history.

Fans of the show would be intrigued to know that The Rocky Horror Picture Show is as full of crazy details behind the camera as it is in front of the camera! We’re mentioning some of them below:

When a corpse was revealed under the dining table in the Rocky Horror Picture Show (1975), none of the actors (except for Tim Curry) actually knew that it was there –so the shock on their faces was absolutely genuine. Tim Curry had known beforehand because he was the one who had to whip the tablecloth off.

The lips that open the film seem familiar to audiences who have seen the Rocky Horror Show, even if they have only seen the poster. This is because the iconic image does not belong to one actress alone; in fact, it is the product of many people working together: The lips that appear in the film are Patricia Quinn’s (who also played Magenta), but she’s only lip-syncing the song “Science Fiction/Double Feature” even though she did in the stage show. The singer is actually Richard O’Brien. And the lips on that famous poster are those of former model, Lorelei Shark.

The general impression of cinema actors is that they live luxurious lives and receive VIP treatment on sets. The truth, however, can be quite the opposite. It is said that, in The Rocky Horror Picture Show, the cast and crew had to film pool scenes in unheated sets. Susan Sarandon even fell ill during production due to this. The filmmakers admired her greatly after her display of resilience, mentioning that she was literally “shaking with fever” on set but still kept going with the performance.

Props are an important part of any horror film. In the case of the Rocky Horror Picture Show, there was a famous skeleton clock, a coffin with a clock face set on the front. It was later revealed that the skeleton inside was real.

Lastly, as unbelievable as it may seem, The Rocky Horror Picture Show was originally written by a young actor with no writing experience, who just wanted to pass his time doing something fun. Who knew his idea of a fun hobby would turn into a cultural phenomenon!

Richard O’Brien, the writer in question, believes that this process contributed majorly to the show’s popularity by lending it a childlike naïveté. In an interview, he said the show’s innocence is “very endearing and not threatening.” Continuing, he mentioned that every character in the show may appear to be intelligent or “sophisticated, but they’re really not.”

According to a report by The Oregonian, one of the theatres in Portland, Oregon has kept up with the ritual of running The Rocky Horror Show for the last 45 years straight, every Saturday night. Since 1978, the Clinton Street Theater has been repeatedly screening the film every Saturday, and they kept doing this last year, despite no fans were present in the theatres due to the pandemic. This devotion to the film shows has attracted visitors from out of the town as well.

The emcee of the theatre, Nathan Williams, sheds light on playing the film to an empty theatre:

I watched it alone. I watched it during the snowstorm. I was in a position to keep a flame burning, to keep a torch lit…I’m just a guy holding a torch for the city of Portland, for all the weirdos, for all the people who don’t have a safe place to call home, we’re home.

As per the report by Variety, Despite the original being such a legend, this new production couldn’t live up to the expectation and it received only a 4.2/10 rating on IMDB.  It lacked the original flavour and wasn’t very appealing.