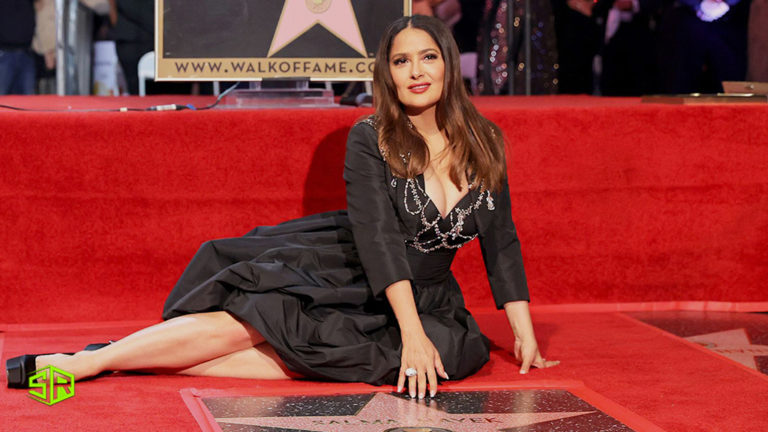 At a special ceremony outside of the TCL Chinese Theatre on Friday, the 55-year-old actress Salma Hayek became the 2,709th celebrity to be honoured with a star on the iconic walkway.

During her victory speech, Hayek encouraged others to “find something to love” as much as she has loved cinema over the years.

“If you think you aren’t good at it like I did, make yourself good at it,” the House of Gucci star told the crowd. “It doesn’t have to be the movies. Be your best at everything you do.”

“Try to be better. Try to find the joy in what you do,” she continued. “Work hard. Prepare. Don’t care what anybody says. But most importantly, don’t listen to yourself when you bring yourself down.”

Earlier in her speech, Hayek discussed some of the challenges she experienced in the early 1990s, including a terrifying incident in Hollywood in which she was nearly stabbed by a stranger.

The actress said a “poor man who was on the floor and was very messed up” attempted to attack her after she ignored his catcall while showing a friend around the area. Eventually, a pair of Hells Angels “gentlemen” stopped the man and led the women to their car, according to Hayek.

“Every time I thought about Hollywood Boulevard, this is what I remember,” the star said at the ceremony. “The truth is that when I went home that night, I said ‘What am I doing here? Nobody wants me. I mean, I almost got killed today.'”

In addition, the Eternals actress mentioned experiencing racism in both public and professional situations.  Hayek recalled one studio telling her, “Why don’t you go back to the (Mexican) telenovelas? You’ll never find a job here,” which she claims happened “many times.”

“So I said, ‘Nobody wants me here. They want me in my country,'” Hayek remembered telling herself at the time.

She ultimately decided to continue.“If you ask yourself what gave me the courage to stay, I say it was you because although they didn’t know me, here in Hollywood, the studios, all the Latins that are in the United States knew who I was,” Hayek said. “They understood that I came here with dreams like they did.”

Salma Hayek during her speech on her “Hollywood Walk of Fame Star Ceremony” last night. The strength and the courage this woman have, is out of this world. I’m so proud of her! ❤︎ pic.twitter.com/6FWiGqWlZG

Sandler, 55, called his Grown Ups costar and personal friend “one of the finest actresses of our generation.”

“You are an amazing person,” the comedian told Hayek. “You know, down-to-earth is a good phrase about Salma. She’s nice to everybody — She’s an incredible actress, but honestly the nicest girl.”

Zhao, 39, spoke candidly about Hayek’s assistance during challenging moments on the set of Eternals. The filmmaker praised the Marvel actress as a “great performer” and a “wonderful person.”

“Salma is a person of incredible talent, depth, and compassion,” Zhao shared. “She is a woman who is brave enough to pave her own way and never allow anyone to put her in the box.”

The struggle of Salma Hayek has paid off. We all are fascinated by her incredible journey.

Truly, the power of dedication and hard work can take you anywhere on the globe. Did this motivate you? Let us know in the comments!