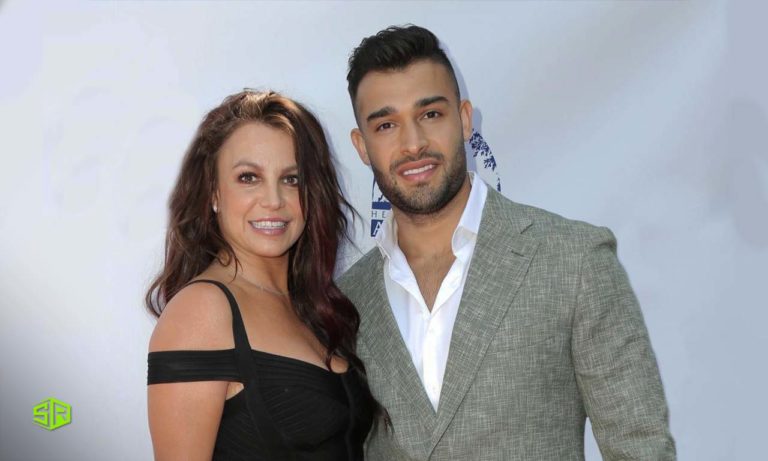 Britney Spears jetted out of town with her fiancé Sam Asghari on Wednesday, kicking off her 40th birthday celebrations early.

Asghari posted a series of photos of himself with Britney Spears on Instagram one day before her 40th birthday, declaring his admiration for her “relentless strength.”

The pop star and the 27-year-old rising actor put on a loving display in sweet photos of them kissing aboard a private jet that they each posted to Instagram later in the day.

Britney appeared overjoyed in videos Sam posted to his Instagram Stories as he presented her with a B-shaped cake to memorialize her milestone birthday.

“I call you Lioness because I admire your relentless strength, I’m inspired by your beautiful heart, I celebrate your smile that lights up my world ❤️,”
the 27-year-old fitness guru wrote on Wednesday, alongside photos of the couple kissing and then smiling.

He said, “Everyday is your birthday my queen ? Happy 1st birthday to my wife ? #dec2nd @britneyspears.”

Soon after, Spears shared a post with the same photos, saying she has been “working out” and feels “blessed.”

Later that day, Sam posted a video of himself aboard the plane as he presented Britney with a cake shaped after her initial and decorated with layers of what appeared to be pink and crimson roses with pink macarons mixed in.

The first gift was decorated with layers of what appeared to be pink and crimson roses with pink macarons mixed in and teardrop–shaped meringue filling the layers.

Fit for a queen: Britney took a close-up video of the cake, which Sam later shared, revealing that the flowers and macarons were adorned with gold leaf and golden glitter.

The cake layers were held together by teardrop-shaped bits of white meringue.

‘Oh my God!’ Britney exclaimed as her fiancé placed the cake in front of her and sang Happy Birthday to her. ‘It’s beautiful, B!’

‘Everybody cover your ears,’ Sam joked before attempting a high note with his shaky voice.

‘This is not from me,’ he clarified as he set down a vase filled with red roses, ‘but I’m going to take credit for it.’

Britney captured a close-up video of the cake, which Sam later shared, revealing that the flowers and macarons were adorned with gold leaf and golden glitter.

The video was captioned, ‘First of many cakes.’

Britney shared several Instagram posts the day before her 40th birthday, including a holiday-themed fashion show in front of her Christmas tree.

She showed off her incredible figure in a variety of dresses, including a chic purple-and-salmon number, a sweet pink number, and a fiery scarlet number with a plunging V-shaped collar that showed off her cleavage.

The Womanizer singer previously stated that she would not perform live as long as her father, Jamie Spears, was in charge of her conservatorship, but now that the arrangement has been terminated, it’s unclear whether she’s ready to return to the stage or the studio.

Britney appeared to be in good spirits in all of her captions and videos, despite the fact that she had revealed earlier in the week that she was on a new medication regimen.

Fans are relieved to see Britney happy and celebrating her birthday. We, too, wish her a very happy birthday and all the joy and freedom she deserves.