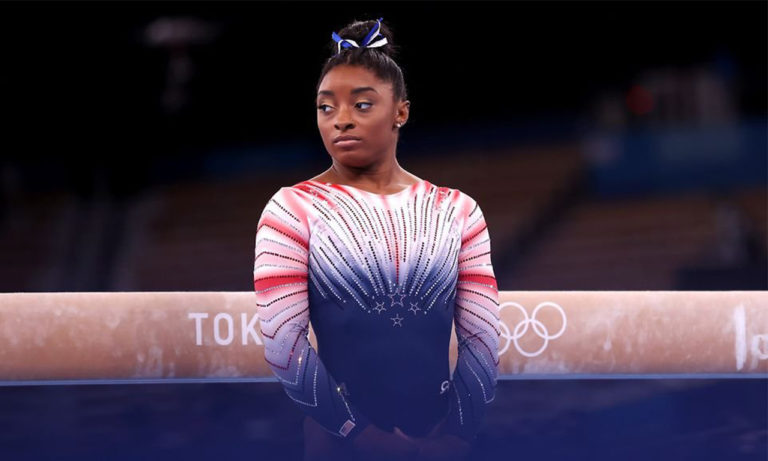 Simone Biles is no doubt the best gymnast — and, some would argue, athlete — in history. With 32 Olympic and World Championship medals to her credit, she has performed a trick that no other woman has attempted, and is the first American female gymnast to win a World medal in every event.

In an interview with The Cut’s Camonghne Felix, she told that she’s had to deal with the added challenges of being a Black woman in athletics.

“As a Black woman, we just have to be greater,” she said. “Because even when we break records and stuff, they almost dim it down, as if it’s just normal.”

Biles remarked about her experience so far and her Olympic campaign earlier this year as she said: “If you looked at everything I’ve gone through for the past seven years, I should have never made another Olympic team.”

My gymnastics career has been filled w/ lots of ups and downs….twist(ies) and turns too. The two-part finale of Simone vs Herself premieres Monday September 27 and Tuesday September 28, only on Facebook Watch. #SimoneVsHerself pic.twitter.com/0B9ZLPNBJd

Biles withdrew from a number of events during the Tokyo Olympics in July, blaming the “twisties,” a condition in which the brain prevents gymnasts from doing dangerous stunts.

Despite the fact that many people supported her decision, including USA Gymnastics, she was met with a storm of criticism.

“I should have quit before Tokyo.” – @Simone_Biles opened up in a recent interview with @TheCut. For more on Simone Biles and how she has managed to cope through a very challenging past few years, tune in to our series Simone vs. Herself for free on @FacebookWatch. pic.twitter.com/UbRfCOHYQA

Biles had pulled out due to mental health concerns saying: “I have to focus on my mental health. I just think mental health is more prevalent in sports right now. We have to protect our minds and our bodies and not just go out and do what the world wants us to do.”

Biles has commented shortly after quitting from an Olympic event: “We are not just athletes, we are people at the end of the day and sometimes you just have to step back.”

She has spoken out on several occasions about her mental health difficulties, including the emotional toll of being one of the girls sexually molested by Larry Nassar, the former Olympic Team doctor.

“I should have quit way before Tokyo when Larry Nassar was in the media for two years,” the 24-year-old told the magazine. “It was too much.”

Guys, the final episode of Simone vs Herself (@vsonwatch) is streaming now on @facebookwatch. I’m so proud of how much I grew, and I’m taking away so many things from this journey. #SimoneVsHerselfhttps://t.co/sY7eb5AfTP pic.twitter.com/TWrY7i4DMt

No matter how successful Black females become, there still seems to be scrutiny and criticism that follows them. Obviously, this leads to hostility and needs to stop.

Thankfully, other Black athletes have also raised their voices against these racist attitudes and discussed the ongoing pressure to perform harder than White women in order to receive the same recognition.

Marirose Roach, an attorney and former Temple athlete, told the Undefeated that Black females deal with “an overcompensation of composure because you’re in a hostile environment — even on your own side at times“.

She takes care of her mental health as a Black female athlete, 7-time Olympic gold medalist Alyson Felix told Elle earlier this year, “I have to pay attention to what I need and take space when I need it, and understand that I’m up against a lot.”

“There’s a lot of pressure, and there are many barriers to break, and sometimes it can just feel overwhelming.”

During a podcast titled All Things Considered in July of this year, sociologist Harry Edwards — who first wrote about Black athletes more than 50 years ago in his book The Revolt Of The Black Athlete and is a professor emeritus at UC Berkeley — said there was a “lot of weight on the shoulders of people who, in many instances, are just barely young adults while at the same time focusing on their principal goal, which is an athletic achievement. That’s a lot of pressure.”

The issue of racism has led to mental health issues among victims for decades. It’s high time that we start treating people equally, irrespective of the color of their skin, and giving them the respect they’ve rightfully earned.