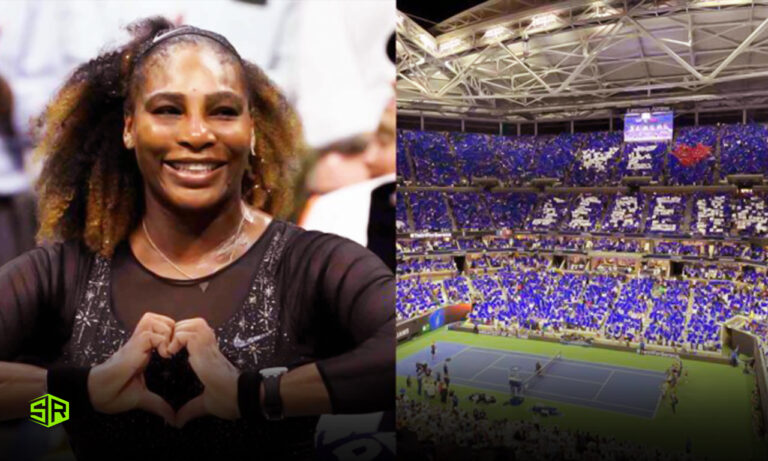 Serena Williams was given a huge surprise by the audience after her U.S Open Round 1 match against Danka Kovinic. The crowd included her husband and her daughter. However, standing alongside Williams at the center court, there were some note-worthy celebrities supporting the tennis sports star.

After Williams’ straight-sets Round One win, Gayle King interviewed her and, in the end, announced that the crowd had a surprise for her, the 23-time grand-slam singles title winner.

If you are a tennis fan who resides outside USA, and would like to see Williams playing her last tournament, here’s how you can watch the U.S. Open Tennis outside of USA.

“Before you go, we have one more surprise for you.” King said and gave a signal to the crowd to do their thing. Upon her prompt, 24,000 fans seated in the stands raised their colored cards in one go, blue and white, and red colors spread across their seats.

The white and red ones spelled out in huge letters across each side of the Arthur Ashe stadium: “We Love Serena.”

Williams, who was wearing a gorgeous black dress along with crystals in her hair, was absolutely touched and gave a huge smile and a twirl.

The ceremony was presented in order to bid farewell to Williams since she spoke of retirement and in case she lost, this would’ve marked her last match in the center court. She entered the stadium bedecked in a dazzling, glittery cape for the last tennis tournament of her career while the audience presented her with a standing ovation.

Serena Williams makes her grand entrance for the last tennis tournament of her professional career.

However, the Greatest of All Time player will return on Wednesday for a match against either the number 2 seeded Anett Kontaveit or Jaqueline Adina Cristian.

But Williams will be back on Wednesday to face either Jaqueline Adina Cristian or the number 2 seeded Anett Kontaveit.

Let us know your thoughts about Serena Williams’ retirement in the comment section below.