How to Watch The Undeclared War 2022 Outside USA 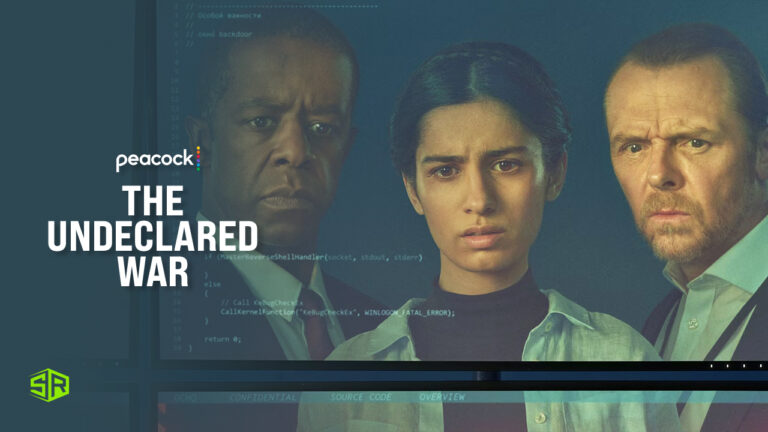 All entertainment-hungry fans will surely appreciate what The Undeclared War has to offer. The upcoming thriller is all set to release on Peacock TV. Since the platform is unavailable outside the USA, fans are asking how to watch The Undeclared War 2022 outside USA.

The Undeclared War is a post-pandemic, post-Boris 2024 dystopian criminal thriller series. After success in the UK, the six-part series is now coming to the US streaming on Peacock TV in August 2022.

The fans will most certainly face geo-restrictions that prevent you from accessing Peacock TV outside USA. Fortunately, finding a premium VPN is a straightforward answer. While this can be used for privacy, it can also be utilized to access your favorite streaming platform back home.

Isn’t it great? So, without further ado, let’s learn how to use a VPN:

A four-step guideline given below is all you need to watch The Undeclared War outside USA:

Is There a Trailer For The Undeclared War 2022?

What is the Release Date of The Undeclared War 2022?

Peacock TV announced the release date of its upcoming cyber-thriller, The Undeclared War, as Thursday, August 18, along with first-look images in June this year.

Peter Kosminsky, the director of the series, is known for award-winning TV films such as “Warriors,” “The Government Inspector,” “The Promise,” “Wolf Hall,” and “The State.” He conducted extensive research for the series to shed light on the most pressing issue of our time.

Following is the top cast of The Undeclared War:

What’s The Undeclared War 2022 About?

The Undeclared War is a 2024-based political thriller starring Simon Pegg. As the UK general election approaches, the series follows a team of analysts at GCHQ engaged in a covert struggle against cyber-attacks on the country.

Saara Parvin (Hannah Khalique-Brown), a GCHQ intern, finds herself on the invisible frontline of cyber warfare with much at stake when she discovers malware intended to target the United Kingdom shortly before the election. Unpredictable adversaries make it difficult for her to stay ahead of her competition. Saara is left wondering how to win a hidden struggle that the public is unaware of.

How Many Seasons of the Undeclared War 2022 Are There?

While Saara, Danny, and the rest of the GCHQ team appear to be alive and have the evidence necessary to show that Britain was targeted, fans did not get to witness this conclusion.

For all we know, the Russians may have prepared a backup plan, or the unidentified aircraft may have been too far along in its flight to be diverted. The harm caused by the cyber-attacks is still being felt towards the conclusion of The Undeclared War, even though Vadim’s information will have helped.

This ending indicates that we will soon be hearing about season 2 of the series. Although an-announced at the moment but it is evident that the series would continue.

How Many Episodes Are In the Undeclared War 2022?

There are six episodes of The Undeclared War series. All would be available on Peacock TV on August 18, 2022. Russian hackers had been preparing a campaign of pro- and anti-Russian social media posts all season to sway British voters ahead of the country’s next general election.

The military launches a counterattack in reaction to the Russians, but Saara’s employer, Danny, thinks that’s precisely what they wanted them to do. By the time the end of The Undeclared War reaches its last seconds, war is certainly about to be declared.

This and much more thrill awaits when the series is available for streaming on Peacock TV.

Is the Undeclared War 2022 Realistic?

Despite opponents’ claims to the contrary, experts believe the show is unquestionably realistic. Jake Moore, a worldwide cyber-security advisor, was interviewed. He stated that the incidents depicted in the show might occur in real life.

Moore was asked if hackers could truly shut down the internet. He replied that he believed the attack was very likely, but the government had put extra safeguards in place for crucial critical lines that, if not protected, might cause widespread chaos.

Is the Undeclared War based on a Book?

The series The Undeclared War is not based on a novel, but Peter Kominsky has set it in post-pandemic Britain. It takes place in 2024 when the United Kingdom faces a series of cyber-attacks in the run-up to a general election.

Why ExpressVPN is a Recommended VPN to Watch The Undeclared War 2022 Outside USA?

ExpressVPN is the best VPN to watch The Undeclared War 2022 outside USA because it offers multilayered security, reliability and super fast speed. Keep reading to learn more about the features offered by ExpressVPN:

ExpressVPN: Best VPN to Watch The Undeclared War 2022 Outside USA

ExpressVPN’s features ensure users of excellent service, with over 3000+ servers in 94+ countries, including the finest one in Seattle, WA. ExpressVPN offers users unlimited bandwidth, even while streaming. If you use this VPN, you will have no activity logs, unlimited server swaps, and three connections simultaneously.

Split Tunneling is another excellent feature, and you can also bypass geo-restricted streaming services like Sling TV, Hulu+Live TV, FuboTV, and Tubi TV, where you can choose which individual apps you may use the VPN for.

It is also compatible with MediaStreamer, a DNS service that enables devices to connect to the VPN even if the device does not natively support VPNs. To utilize this service, you must first register your IP address on ExpressVPN’s website and watch your favorite titles like What We Do In The Shadows, Ms. Marvel, and The Bear without interruption.

ExpressVPN has three plans: one-month, six-month, and twelve-month. There is a current promotion where the 12-month plan costs US$ 6.67/mo - Save 49% and get 3 extra months FREE with 12-month plan. This plan allows you to save 49% off the unlimited monthly plan and receive an extra three months free. This is now their most popular plan.

Who wrote the Undeclared War?

The Undeclared War 2022 series is written by Peter Kosminsky.

Is Undeclared A sequel to Freaks and Geeks?

No, Freaks and Geeks is a high school drama, whereas The Undeclared War is a thriller series.

Where was Undeclared filmed?

The primary filming locations for The Undeclared War were Barry in Wales and Bristol in England.

The Undeclared War 2022 will premiere on Peacock TV in the US on August 18. Remember that if you are not in the US, you must use a VPN to watch the series. ExpressVPN  is the greatest there is, with its outstanding and reliable features.

So, get your subscription today and watch The Undeclared War 2022 outside USA.