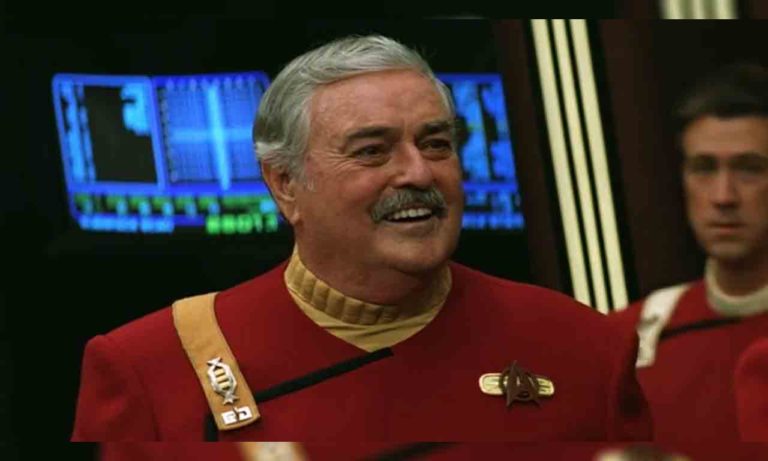 Even though the actor is known for performing the role of “Scotty” on Star Trek, very few people know that he has voiced over 50 characters in Star Trek and is even credited for voicing seven different roles in a single episode.

Doohan wasn’t just your regular TV actor; he was an epitome of versatility combined with an unmatched talent of acting and voice artistry.

Just like Doohan displayed an incomparable style on-screen playing Scotty, his voice acting wonders were also unparalleled thanks to his professional experience of voicing over 4,000 radio programs.

The legendary artist himself acknowledged his vocal versatility, as he could easily switch into different accents and was quite experimental with his voice.

James Doohan voiced 53 different characters in Star Trek: The Animated Series (1973 TV Show) that are named in the following list in alphabetical order:

Wanna know which Star Trek character you are based on your zodiac? Read here:

Which Character from the Original Star Trek Series Are You Based On Your Zodiac?

Fans all over the world remember the legend on his birthday.

Remembering James Doohan on what would have been his 101st birthday. #StarTrek pic.twitter.com/Y1wSyYc8p4

Since Doohan has voiced multiple characters in Star Trek, fans always speculated his favorite character. During an interview, Doohan was asked which accent he liked the most in his entire career, and he went with the Scottish accent that he had used for “Scotty” in Star Trek.

Doohan believed that his vocal cords were quite flexible and could deliver hundreds of different tones, polished by his ability to do different accents.

The Canadian actor admitted that he had only attempted on a Scottish accent once before he was offered Star Trek. It was his experimental nature that led him to use a faux-Scottish tone that gave birth to an unforgettable character.

Doohan served in the Canadian Air Force in the 14th Field Artillery Regiment of the 3rd Canadian Infantry Division before he began his acting career. He also took part in WWII. He bravely shot two German snipers on D-Day while leading his men through the field of anti-tank mines. He even got 6 hits on his body, and one hit blew off his middle finger, while his cigarette case safeguarded his heart from one hit.

Even though Star Trek’s success made James Doohan a star, but after the show ended, he struggled with finding decent roles as he was being typecasted. His fans always saw him as Scotty, and it went against his career. He gave a few cameo appearances in various movies and played Damon Warwick’s role in the soap opera “The Bold and the Beautiful.”

James Doohan was presented with a star in the Hollywood Hall of Fame on 31st August 2004. On 20th July, in 2005, Doohan took his last breaths in the morning at his home in Washington; he passed away due to his deteriorating health conditions due to pulmonary fibrosis. Fans remember him for his outstanding display of artistry in his roles, and he is still loved by millions worldwide.