How to Watch See Season 3 Outside USA 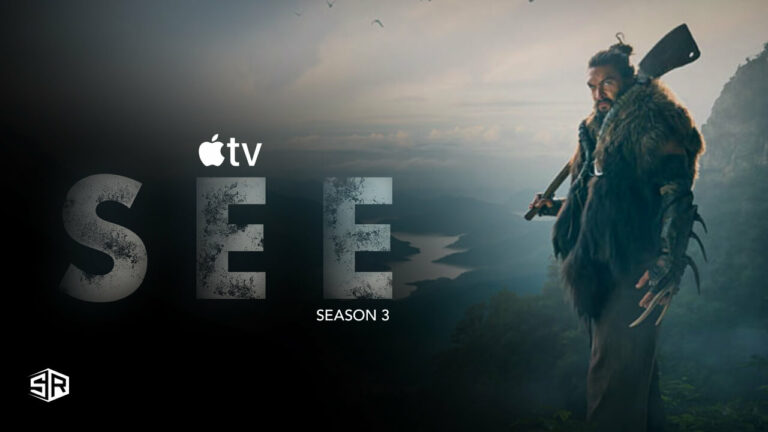 While waiting for Jason Momoa on Aquaman and the Lost Kingdom, you should tune in to his television series airing this August 26, 2022. But before that, you need to learn how to watch See Season 3 outside USA on Apple TV+.

Apple TV’s geo-restriction policy blocks streamers located outside the USA from streaming their content. So if you are one of the streamers outside the US, you need to do extra things to be able to watch See Season 3.

And that is connecting to a VPN. When you connect to a VPN, you bypass the geo-restriction policy that streaming platforms have. Fortunately for you, we know the best VPN to use, You can also use these best VPNs to unblock other streaming services like Disney Plus, Crave TV, and many more.

We compiled the four simple steps on how to watch See Season 3 outside the USA on Apple TV using a VPN.

Where can I watch See Season 3?

The episode of See Season 3 will be on Apple TV+. The series is only available for streaming on Apple TV+ since it is a science fiction series produced for the said streaming platform. Do not forget to equip yourself with a VPN account if you plan to watch this series outside the US.

When will See Season 3 premiere on Apple TV+?

The See Season 3 release date 2022 will be on August 26 and exclusively on Apple TV+. Starting that day, you will be able to stream the series. Since it is an Apple TV+ exclusive, you can only stream it on that streaming platform. So, subscribe to AppleTV+ now if you haven’t.

What is the plot of See Season 3?

The See Season 2 ended with Baba Voss and his vengeful brother, Edo Voss, fighting. The outcome of their fight will be revealed in See Season 3 Episode 1. Season 3 will still follow Baba Voss, the chief of the Alkenny Tribe, as he tries to protect his adopted children, who have the sense of sight, from witchfinders.

Who is in the See Season 3 cast?

Jason Momoa leads the See Season 3 cast. He will continue to portray the character Baba Voss. Hera Hilmar will play as Maghra Kane, Baba’s wife. Sylvia Hoeks acts as Queen Sibeth Kane, the ruler of the Payan Kingdom and the twin sister of Maghra. Other stars included in the cast are Christian Camargo, Nesta Cooper, Dave Bautista, and many more.

Is there a Season 3 of See out?

No, the third season of the TV series See will be out on August 26, 2022. Episodes are available for streaming exclusively on Apple TV+. Do not forget to subscribe to Apple TV if you haven’t, and avail a VPN subscription to bypass the geo-restriction when you stream See Season 3 outside of the US.

How many episodes are there in See on Apple TV+?

Season one and two of See had eight episodes each. The See Season 3 episodes will also be eight. In total, See has 24 episodes in its production of three seasons. All of the See episodes are available for streaming on Apple TV+.

Is there Season 4 of See?

No, unfortunately for the TV series See fans, there will be no See Season 4. The third season airing this August 26, 2022, is the last season for the series. So, expect that all your questions, confusions, and theories since Season 1 will be answered in the episodes of Season 3.

Is there a See trailer?

Apple TV released a See Season 3 trailer on their official youtube channel as part of promotions for the series. The trailer teases the war that will happen as Queen Sibeth Kane continues to hunt her twin sister’s children, who have the sense of sight. Baba Voss and the Alkenny tribe do everything they can to protect the children and the tribe.


Why ExpressVPN is the Best VPN to Watch See Season 3 Outside USA?

ExpressVPN is the best VPN to watch See Season 3 outside USA due to its outstanding VPN services. ExpressVPN is ideal to watch Luck, Best Foot Forward and other famous Apple TV+ shows. Read the detailed description of its features here:

ExpressVPN: The Best VPN to Watch See Season 3 Outside USA

Over 30 ExpressVPN US servers are available to connect with when you watch See Season 3. On top of that, 3000+ servers are scattered in 94+ countries if you need to watch geo-restricted content from other countries.

ExpressVPN offers its users a safe, secure, and private connection with the implementation of no activity logs. With it, you are browsing the internet anonymously, and websites can’t track you. This VPN also provides users with a user-friendly interface for easy navigation.

Users do not forget to mention how impressive ExpressVPN’s features are when asked what they liked about the VPN. The features they are gushing about are the unlimited server switches, automatic kill switch, 99.99% uptime (availability), and split tunneling.

For users who have devices that do not support VPN natively, a DNS service called MediaStreamer is available for them to use. This DNS service allows any device to connect to a VPN regardless of any conditions.

You can choose from the three ExpressVPN plans to avail. The one-month plan costs $12.95. You can choose a six-month plan worth $9.99/ mo for a longer plan, billed every six months. A more-extended plan is also available in 12 months that costs US$ 6.67/mo - Save 49% and get 3 extra months FREE with 12-month plan.

The great thing about the ExpressVPN plan is that it has a 30-day 100% money-back guarantee. This means that if you report your dissatisfaction with ExpressVPN’s services within 30 days after purchase, you can get a full refund. ExpressVPN can unblock streaming services like Hulu, Netflix, Discovery+, HBO Max, etc.

Is See based on a book?

No, the TV series See streaming on Apple TV is NOT based on a book. The series was created by Steven Knight, known for his works on Locke, Closed Circuit, Hummingbird, etc.

Who directed and wrote See?

Anders Engström, Frederick E.O. Toye, Francis Lawrence, Salli Richardson–Whitfield, Stephen Surjik, and Simon Cellan Jones has directed an episode or two in the three seasons of See. For the series’ writer, there were multiple ones, and Steven Knight is part of it.

What are the See filming locations?

Filming for the entire production of See took place in various provinces of Canada.

All the fans from the first and second of the TV series See are now hyped for the release of the third and final season. As the story of Baba Voss and the Alkenny tribe is ending, you should make sure not to miss any series episodes. Fortunately, you now know how to watch See Season 3 outside USA.

By using ExpressVPN, you will never experience streaming problems