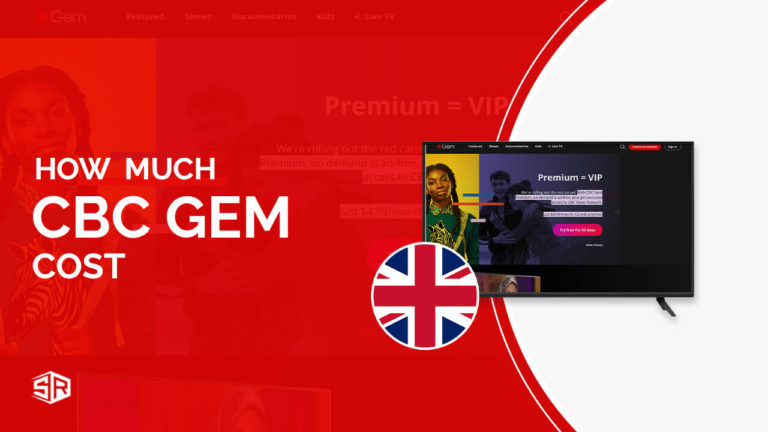 Most of us wonder what is the cost of CBC Gem in UK? The CBC Gem cost in UK is only 3.19 GBP (4.99 CAD) per month. The Premium plan of this streaming platform allows exclusive access to CBC News Network. The plan is ad-free and can be canceled at any time.

The CBC’s online streaming video service is called CBC Gem. With a subscription to this streaming platform, you can stream the best TV series, films, news, documentaries, and more for free.

The content of CBC Gem can only be accessed in Canada because of geo-restrictions. You can use a VPN service like ExpressVPN to watch CBC in UK  and enjoy the whole content library without any interruptions.

Let’s find out what is the CBC Gem Premium cost and what steps you need to follow for CBC Gem login!

The CBC Gem Premium cost is 3.19 GBP (4.99 CAD) per month. You can purchase the subscription via the CBC app for iOS and Android or via the CBC website.

A free trial of one month is offered to new subscribers just like other streaming platforms like Paramount+.

So, if you are wondering is CBC Gem free in UK? Yes, you can enjoy CBC Gem for 30 days without any cost. After the free trial, you can still enjoy your favourite shows on-demand from current and previous seasons (ad-free) for just 3.19 GBP (4.99 CAD).

With a CBC Gem subscription, you can watch a whole range of exclusive CBC Gem shows and movies. You can also watch award events like Juno Awards to support your favourite actor or actress.

Highlights and video features of major sports events like swimming, figure skating, curling, golf, sliding, skiing, soccer, speed skating,  tennis, and Spruce Meadows. You can create your own alerts and news feeds to ensure that you always receive the latest NHL, NBA, MLB, CFL, and NFL scores and news.

How Do I Pay For CBC Gem in UK?

To pay for the CBC Gem cost in UK, you can use the CBC app or website. Your subscription will be processed by Google (Google Play) or Apple (Apple iTunes) if you subscribe to Premium through the CBC Gem app for  Apple TV, Android, or iOS.

Any additional subscription payments will be made through Apple iTunes or Google Play.

CBC will manage your subscription if you used have used the official website to pay for the CBC Gem cost in UK.

The following payment methods are accepted on the CBC Gem website:

On the CBC Gem Website, you can not use American Express, pre-paid credit card gift cards, Interac Online, PayPal, or other payment methods.

You can subscribe to Premium through the Gem app for Apple TV, Android, and iOS if you have PayPal, American Express, or a debit card listed as a payment method on your App Store or Google Play accounts.

So, stop thinking about is CBC Gem Premium worth it in UK because the subscription to CBC Gem is worth your money and you can unexpected streaming experience.

You can access content on Gem in a number of ways. You can watch content on CBC Gem using your Android device’s web browser but we recommend downloading the CBC app for your Android or iOS device.

Here are different ways of accessing the content after paying for CBC Gem cost in UK:

Without CBC Gem login you can:

With CBC Gem free membership (registered yourself first on CBC) you can:

Canadians can improve their viewing experience by paying for CBC Gem Premium cost (with the first month free):

How much does it cost to stream Canadian TV in the UK?

You can stream Canadian TV for free for 30 days in UK. After that, you have to pay 3.19 GBP (4.99 CAD) per month. Simply download CBC Gem, create a CBC account, and launch your free trial to get started. You can cancel your subscription anytime.

Why do I have to pay for CBC Gem in UK?

How much is CBC Gem per month in UK?

The cost of CBC Gem per month is 3.19 GBP (4.99 CAD) in UK. The CBC Gem Premium plan is ad-free allowing exclusive access to CBC News Network.

Is CBC Gem Premium worth it in UK?

Yes, CBC Gem Premium is worth it in UK. With a CBC Gem Premium subscription, you can watch shows from all Canadian regions. Also, you get access to CBC News Network live stream and CBC Gem-only programs.

We hope that our guide on the CBC Gem cost in UK is helpful for you and now you have a clear idea regarding CBC Gem Premium cost.

With a subscription to this streaming platform, you can access a wide content library that you can enjoy with your friends and family. You can watch CBC shows and movies to enjoy your weekend nights to the fullest.

Remember to use the best VPN for streaming so that you can not face the geo-restriction of this streaming platform.