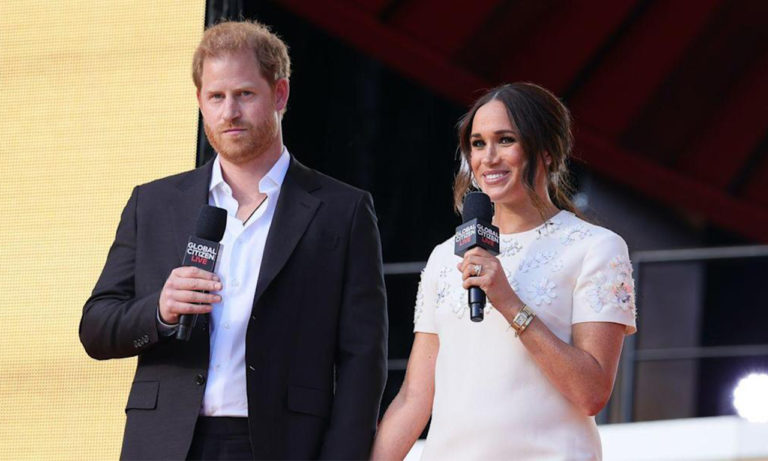 Prince Harry and his wife, Meghan — the ever so revered Royal couple — have taken part in a “once-in-a-generation” 24-hour event to raise awareness about climate change, vaccine equality, and famine.

As the ceremony — which featured musical performers from around the world — was streamed live from New York’s Central Park, the Duke and Duchess of Sussex campaigned for COVID-19 vaccine availability to be considered “as a basic human right.“

The Duke and Duchess of Sussex spoke at Global Citizen Live in Central Park on Saturday about the need for COVID-19 vaccine equity around the world.

“Every single person on this planet has a fundamental right to get this vaccine. That’s the point, but that’s not happening,” Meghan, 40, said.

“And while in this country and many others, you can go almost anywhere and get vaccinated, billions of people around the world cannot,” she continued. “This year, the world’s expected to produce enough doses to meet the target of vaccinating 70% of people in every single country. But it is wrong that so much of the vaccine supply has only gone to just 10 wealthy nations so far, and not everyone else. It’s just not OK.”

“The way you’re born should not dictate your ability to survive,” Prince Harry responded to cheers from the thousands-strong crowd.

“Guys, we have what we need to vaccinate the world, but the experts told us, here’s what’s getting in the way,” Harry, 37, added. “They said many countries are ready to produce vaccines at home, yet they aren’t allowed to, because ultra-wealthy pharmaceutical companies are not sharing the recipes to make them. These countries have the means, the ability and the workers to start manufacturing. All they’re waiting for is the vaccine intellectual property to be waived and for the vaccine technology to be transferred over. And by the way, many of these vaccines were publicly funded. They are your vaccines, you paid for them.“

While the event called on wealthier countries to pledge to share their doses with the world’s poorest countries, Harry and Meghan called for independent international bodies to identify where such doses are most needed.

“Just think about the millions of vaccines that have been discarded this year. That’s like throwing away life vests when those around you are drowning,” Meghan said.

“So, global citizens, we ask you tonight, do you think we should start treating access to the vaccine as a basic human right?” Harry concluded. “When we start making decisions through that lens, where every single person deserves equal access to the vaccine, then we can achieve what is needed together, for all of us.“

“Over the past year, our world has experienced pain, loss and struggle — together. Now we need to recover and heal — together,” the couple said in a previous statement on the subject. “We can’t leave anybody behind. We will all benefit, we will all be safer, when everyone, everywhere has equal access to the vaccine.“

They continued, “We must pursue equitable vaccine distribution and, in that, restore faith in our common humanity. The mission couldn’t be more critical or important.“

I love this so much #MeghanMarkle pic.twitter.com/PnzEafUTcz

Coldplay, Jennifer Lopez, Lizzo, and others performed on Central Park’s Great Lawn as part of a 24-hour broadcast from cities around the world, calling on the G7 and the European Union to share at least 1 billion COVID-19 vaccine doses with those in need and to support calls for a waiver on COVID-19 vaccine intellectual property rights.

The couple visited the United Nations, where they met with UN Deputy Secretary-General Amina Mohammed at the 193-member world body’s annual gathering of leaders before concluding their New York journey at Global Citizen Live.

Also performing in Central Park were Billie Eilish and Jennifer Lopez, among others.

The social media broadcast began with a pre-recorded performance by pop sensations BTS in Seoul, before moving on to Paris and Elton John.

“No-one should be left behind,” said the 74-year-old pop legend, who appeared despite a hip injury that forced him to cancel the rest of his tour dates this year.

By signing up for the Global Citizen app and spreading its messages on social media, tens of thousands of people won tickets to the performances (which required vaccination proof or negative testing).

Thank you to everyone who took action for #GlobalCitizenLive!!!

The couple began their tour to New York on Thursday morning with Mayor Bill de Blasio and Governor Kathy Hochul at One World Observatory at the World Trade Center.

Meghan wore a dark turtleneck with matching trousers under a jacket and put her hair back into her typical low bun, while Harry wore a classic suit and tie.

They also visited the 9/11 Museum and memorial, followed by a Thursday afternoon meeting with US Ambassador to the UN Linda Thomas-Greenfield.

This whole journey was remarkable for the performers and for the Prince and Princess. Spreading awareness and playing their part to save the World was the motive behind this.

The fans love the idea and their reaction to this was priceless. What do you think about the couple using their immense influence to make such a necessary impact in this dire global situation?

How to Watch Foxtel Go in UK
Is Harry Potter On Netflix?