How to Watch Disney+ Hotstar in UK [Updated January 2022] 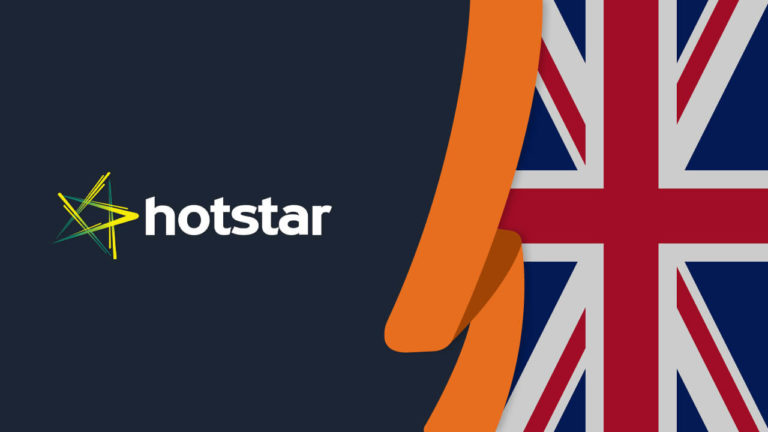 Indian shows like Mirzapur and Sacred games have gained global popularity all over the globe in a very short time. It’s a pity, though, that Indian content enthusiasts in UK are deprived of shows because of frustrating geo-restrictions.

The good news, however, is that with a reliable VPN you will be able to watch Disney+ Hotstar in UK. Follow this blog to learn how to use a VPN to unblock Indian Hotstar and which VPN provider would be the best for you.

To watch Hotstar in UK simply follow these steps:

Follow this video tutorial to see how you can unblock Hotstar with a VPN:

Why Do You Need a VPN to Watch Hotstar in UK?

You will see the following error message if you try to access it in UK:

Though Hotstar is available all over the world, its library is limited to specific content titles, and free content is not available in the UK. These limitations are because of content licensing and distribution regulations. It is owned and operated by Star India, which is a subsidiary of The Walt Disney Company, India.

Streaming services like SonyLIV, Voot, and Zee5 are also not available in the UK. You will, therefore, need a VPN to stream Indian Hotstar in the UK and gain access to all the content titles you’ve been unable to watch.

There are three best VPNs for Hotstar in my opinion, which have numerous servers in India and are reliable in terms of safety and speed.

After testing 20+ VPNs, we recommend ExpressVPN to watch Hotstar as it not only unblocks Hotstar but has also proved to be the fastest in terms of speed.

It is clearly a giant in the industry, rightfully popular because of its amazing speed and security features, and its larger network of 3000+ servers in 94 countries. It is an excellent choice to watch the streaming service or unblock it in the UK because it has three servers in India. One of these servers is a virtual server available via the UK, and the rest of the two servers are in Chennai and Mumbai.

ExpressVPN is a premium VPN provider and charges $6.67/mo (Save 49% and get 3 extra months FREE with 12-month plan) for its 12+3 months package, which is a bit higher than its competitors. It allows 5 simultaneous logins you can share your account with your friends and family and enjoy secure streaming.

Nevertheless, the security and performance of this VPN is top-notch and it totally justify the price it charges. The servers have AES 256-bit encryption and it guarantees no DNS or IP leaks. You can also watch CBC in UK with the help of a reliable VPN like ExpressVPN.

Surfshark is an optimal choice for watching Hotstar because it is an affordable VPN. It’s offering 2-years package for $2.49/mo (81% Off on 2 Years Plan). Moreover, you can share your account with anyone as Surfshark offers unlimited logins.  It provides instant connectivity.

All of its servers in India are highly optimized for streaming and support P2P support, OpenVPN/IKEv2, Private DNS, Camouflage Mode, and Extensions.

It has features like Kill switch, P2P traffic, dedicated IP addresses, etc. It has three servers in India located in Mumbai, Chennai, and Indore. It is highly recommended if you wish to unblock it in UK and watch Disney plus or any other Bollywood content.

NordVPN has the largest server network. It has 30+ servers in India 5200+ total servers in 59 countries. All of its servers are optimized for streaming and have AES 256-bit encryption protocol safety. This is why it does not leak DNS or IP address and it can easily unblock Hotstar in the UK, instantly. You can also use NordVPN to unblock HBO Max in UK or watch Optus Sport in the UK.

Moreover, it is a pocket-friendly VPN provider charging $3.71/mo (Save 68% on 2 Years Deal) for its 2-year plan with a 30-days money-back guarantee. It has high-speed servers optimal for streaming and safety features, which protects your identity if the connection breaks down. It offers 6 multi-logins so that you can share your account with your friends and family and enjoy secure streaming.

Why is the Indian Hotstar version is the best?

The Indian Hotstar version provides both free content (including Champs League) and a paid version that allows users to stream your favorite series from India’s largest collection that are not accessible anywhere else.

Since we all know, Mouse House distributes its products in India via Hotstar, so that you can now watch Disney+ movies and Tv shows on it.

The Indian version has a 7-10 days money-back guarantee, but Hotstar UK users do not have access to this refund policy.

Indian Hotstar Compared to its Versions in Other Regions

The price of a Hotstar Annual subscription in the US is 28.79 GBP, whereas the cost of the annual subscription of Hotstar in India is 11.33 GBP (1499 INR). You cannot just turn a blind eye to this 17.28 GBP difference. The best favor you can do yourself is to use a VPN and save your precious dimes.

Another big difference between the two is the number of channels: There are 33 channels offered by Indian Hotstar, while its US version offers only 28 channels. Clearly, the content offered by the latter is less than its Indian counterpart.

Many people stream Hotstar through their desktop by visiting the official Hotstar website. However, if you are one of those people who like to stream content on your phones or tablets on the go, then you can download it quite easily. The app is available for both Android and iOS devices in their respective app stores.

If you are residing in the UK then the chances are that you might have to struggle to find the real app online. To save you from any hassle, I have provided their official links below:

How to Subscribe to Hotstar with The Lowest Rates?

If you are living abroad, especially if you are in the US, there is a way you can save 17.28 GBP and subscribe to Hotstar India by paying 11.33 GBP rather than 28.79 GBP. Follow these simple steps to avail of the discount:

To stream Hotstar in the UK, simply follow these steps:

Every online streamer has a different device preference; thus, it is essential to know the device compatibility of the service you use. The streaming service is compatible with the following devices:

How to Watch Hotstar in the UK on iOS Devices?

Follow these steps to install and watch Hotstar in the UK on iOs:

Now you will be able to watch Hotstar in the UK on your iOS device.

How to Watch Hotstar on Android Devices?

Follow these steps to install and watch Hotstar in UK on Android devices:

How to Watch Hotstar on other Devices

Follow the steps below to watch Hotstar on other devices:

Select a VPN that is reliable. We recommend ExpressVPN for this.

You can watch Hotstar on Amazon Fire Stick by the steps below:

How to Watch English Premier League on Hotstar in UK

The best time of the year for soccer enthusiasts in England is here, as the popular English Premier League started in August and will go on till 2022.

The matches are available for live streaming on Hotstar, and you can watch them all easily from UK as long as you’re subscribed to the best VPN!

Is Hotstar Available in UK?

No, You will need a VPN to watch Hotstar in the UK because it is a geo-restricted service.

How can I watch Hotstar in the UK Without a VPN?

No, you cannot access Hotstar in UK without a VPN because otherwise it is geo-restricted outside India and a VPN is required to unblock Hotstar content in UK.

No, Indian Hotstar subscription will not work in UK because of the geo-restrictions. If you want to use a Hotstar India subscription, then you will have to use a VPN and connect to an Indian server.

How many devices can I have on Disney+Hotstar?

According to their website, Disney+ Hotstar will allow you to view on two devices at the same time per subscription account.

Is Disney+ and Disney+ Hotstar the same?

Yes, Hotstar has been renamed Disney+ Hotstar ahead of its launch. In addition, both Android and iOS devices now support the new branding.

How can I watch Hotstar in UK for free?

With a VPN, you can watch Hotstar live for free in the UK. Only Hotstar India provides a free plan with a selection of free movies and shows. If you want to watch Hotstar for free, connect to an Indian server and change your IP address to that country.

Does Disney own Hotstar?

All in all, Hotstar is a fantastic online streaming service with a massive library of contents such as Mirzapur, Sacred games, Aarya and the list goes on. The fact that its content is geo-restricted sucks big time, but still, there is always a workaround for everything, right.

I hope this guide has helped you understand how to use a reliable VPN to watch Hotstar in UK.