Twilight Movies in Order: How to Watch in Australia Chronologically 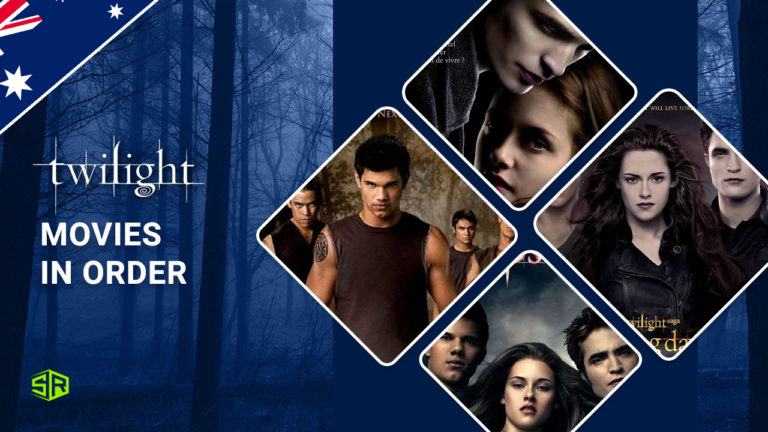 It’s going to be a decade since the release of the last Twilight movie, a franchise that created a major buzz around the world during its tenure from 2008 to 2012, leading to a hell of a lot of influence and a couple of controversies at the time but a lot more memes today.

Created by Stephanie Meyer, the series is out-an-out a YA paranormal romance that platformed the careers of Kristen Stewart and Robert Pattinson. While the supporting cast of young actors failed to peddle their careers, therefore, the two main protagonists are now in the league of best actors.

This five-movie franchise had everything — sparkling blood-sucking vampires, a dangerous pack of wolves and a confused and silly teenage girl who is getting attention from all sides. What starts off as a simple love story between two different species, or as they like to say a lamb and a lion, turns into a full-blown action drama with exhilarating fight sequences and an almost tragic ending.

If you’re new to the world of Twilight movies in order, we’re excited to welcome you and ensure summit entertainment.

Starring Kristen Stewart, Robert Pattinson, Billy Burke, Peter Facinelli, Taylor Lautner, Nikki Reed and many more drop-dead gorgeous faces perfect for playing vampire roles, this insanely popular supernatural love story — which can safely be called one of the most popular romantic movies on Netflix (in its own twisted ways!) to watch till date — consists of five parts of the twilight saga.

Adapted by the best-selling book series, the last one, Breaking Dawn, was divided into two films, giving shape to five films instead of four.

So, without further ado, let’s begin our “hunt” and list down all Twilight movies in order Australia.

What is the Best Order to Watch Twilight Movies

The Twilight movies are the easiest to track in aspects of the release year, so if you’re a Twilight fan like us, you might well know all this beforehand because with all the hours and hours we have managed to spend in our entire life praising all the books and acquiring knowledge that much about the non-existent Vampire and Werewolf historical past like it actually means anything.

But, if you’re fresh here and ready to get into the Vampire craze, this may seem a little unclear as to which film comes first. But there’s also the fact that the final novel, Twilight: Breaking Dawn, is separated into two movies.

Not only was it the ideal way to finish an original show, but it also allows the plot to live and expand as the actions and existence of all the characters come to a close.

Here is the list of all the Twilight movies in order of release date:

The Twilight saga is quite simple to track because the release dates correspond to the timeframe. The only challenge may be maintaining the titles straight, however, if you’re thinking which film contains your favourite parts, we’ve got you wrapped with the synopsis below.

Bella doesn’t anticipate anything to happen when her mom decides to remarry and she prefers to live alongside her father in the gloomy tiny town of Forks, Washington. Things change, however, when she encounters the strange and stunningly gorgeous Edward Cullen.

For Edward is unlike any other male she’s ever encountered. He’s unlike anyone she’s ever met before. He’s sharp and smart, and he appears to see right into her soul. In little time, they areengaged in a deep and definitely unusual romance – unconventional because Edward truly isn’t like everybody else. This is one of the best Twilight movies in order Australia.

For action lovers, you can watch X-Men movies and Star War movies in order and get into a whole new world of action.

This is one of the Twilight movies in order Australia. In the New Moon, we can see that Bella and Edward Cullen are in love but not together anymore because of the events that went down on her birthday.

After healing from a vampire assault that almost killed her, Bella plans to spend her birthday with Edward and his family.

However, a slight mishap during the celebrations leads to Bella’s blood getting shed, a vision that becomes too powerful for the Cullens, who decide to leave Forks, Washington just for Edward and Bella. Initially distraught, Bella seeks solace in wild living and an even deeper bond with Jacob Black.

For some fantasy movies, you can watch Harry Potter movies and Lord of the Rings movies in order.

Bella is again trapped by peril as Seattle is rocked by a series of strange deaths and a malevolent vampire pursues her vengeance. In the middle of it all, Bella is pushed to choose between her feelings for Edward and her relationship with Jacob, realizing that her choice has the ability to spark the vampire-werewolf conflict.

Bella is about to graduate and is faced with the most critical decision of her life. This is one of the best Twilight movies in order Australia.

You can also watch Night Sky on Amazon Prime outside Australia with the help of the 5 best Amazon Prime VPNs.

Edward and Bella marry, but events start to turn for something worse following their vacation on Isle Esme after Bella discovers she is expecting a child. As the foetus grows at an unnaturally rapid rate and gives Bella several health issues, Edward and the wolves fear that she may give birth to an immortal kid.

However, the Cullens will do everything possible to keep both Bella and the unborn child safe.

The last instalment of the Twilight Saga opens with Bella, now a vampire, learning how to use her skills. Renesmee is thriving, and she is overjoyed to meet her daughter. However, when someone witnesses Renesmee doing anything that leads them to believe she has been transformed.

This individual is sent to the Volturi since it is illegal to transform a youngster. And the punishment is death for both the person who converted the child into a vampire and the child because they consider a vampire-turned child to be too harmful. Alice has a glimpse of the Volturi pursuing them.

As a result, the Cullens attempt to persuade them that Renesmee is not a risk. So they invite their family and friends to join them on the stage.

How old is Bella in Twilight?

Bella is a 17-year old human girl in Twilight who moves to live with her father in a small town of Phoenix, Arizona.

Yes, Jacob marry Renesmee at the end of the saga, and they live happily together, along with Edward and Bella.

Who is Renesmee to Jacob?

Jacob had feelings for Bella at first, but she picked Edward and got pregnant  and gave birth to Renesmee, a half-human, half-vampire hybrid. As part of the bonding, Jacob will only remain Renesmee’s brother figure until she reaches the age of consent, at which point she may develop love affections for him.

What were Bella's powers?

Bella had the power to shield her mind from attack or reading. She had the power as a human too. Once she transformed into a vampire, her powers only enhanced and she was able to expand the shield to protect others.

Will there be a 6 Twilight movie?

No, there will be no sixth Twilight film. Meyer finally opted not to consider Forever Dawn a Twilight sequel since it did not “fit into the young adult category” and she “wasn’t worried about her audience yet” and was simply writing for her own entertainment.

Is Twilight on Disney Plus?

No, The Twilight Saga is not available on Disney Plus. Still, you can access a large choice of programmes from Marvel, Disney+, Star Wars, National Geographic Pixar, and ESPN via the streaming platform for AU$11.01/mo  (US$7.99) per month or AU$110.25/mo (US$79.99) per year.

If you’re hoping to partake in a Twilight saga order marathon, you’re in luck. Catch the series on Netflix, as all of them have arrived on the platform this summer.