How to Watch NASCAR Xfinity Series 2022 Live in Australia 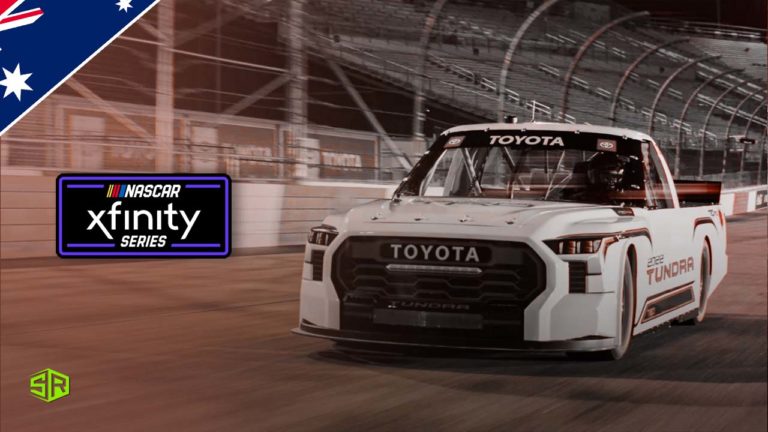 If you love to drive your car on high revs and the sound of roaring engines excite you, the NASCAR racing series must be up your alley. If you are among the NASCAR fans and car racing enthusiasts, and finding a way to watch NASCAR Xfinity Series 2022 live in Australia, then look no further! We are going to reveal it all.

The NASCAR Xfinity Series is an official racing series of stock cars organized by NASCAR. The 2022 season of the Xfinity Series will be its 41st season. The 2022 season will kick off on February 19th with ‘Beef. It’s What’s For Dinner. 300’ aka ‘The Daytona 300’ race at Daytona International Speedway and will conclude on November 5th with the final playoff at Phoenix Raceway.

The upcoming race of NASCAR Xfinity Series called as ‘ToyotaCare 250’ is scheduled to be held on 2nd April at Richmond Raceway in Richmond, Virginia starting at 1:30 PM ET. If you are wondering how to watch ToyotaCare 250 Nascar Xfinity Series Race live, then keep on reading this guide.

For Aussie fans of NASCAR, Foxtel is not live-streaming the event this year so, sadly there won’t be any proper channel to keep you updated with all the NASCAR races. Also, since half of the season is broadcasted on Fox hence Fox via Kayo Sports could be an option but what about the rest of the races? Luckily, there is an alternate way to enjoy the live coverage of NASCAR Xfinity Series 2022 in Australia and i.e. NASCAR Track pass.

However, if you need an uninterrupted transmission of every race from NASCAR Xfinity Series 2022 in Australia, you will need a premium VPN. Follow our quick guide to find out why and how to do that.

How to Watch NASCAR Xfinity Series 2022 Live in Australia

To watch NASCAR Xfinity Series live without having to face any geo-blocks, you need a premium VPN app. Fast-moving sports like the NASCAR racing series require uninterrupted streaming and high buffering speed. Moreover, not all VPNs are capable of bypassing the geo-restrictions of streaming platforms. Hence, don’t waste your time and efforts on ordinary VPN apps.

In case you are wondering which VPN is the best option for you, we are enlisting the 3 Best VPNs to Watch NASCAR Xfinity Series 2022 live in Australia.

ExpressVPN is hands down the best in the business due to its incredible features and ultra-fast servers. It is our No.1 recommended VPN to watch NASCAR Xfinity Series 2022 live in Australia. With this VPN you can watch the latest sports like Amir Khan vs Kell Brook live in Australia.

It offers several super-fast servers in the USA, the UK, Canada, etc. from its huge global network of 3200+ servers.

As of now, you can get ExpressVPN for AU$ 9.42/mo (US$ 6.67/mo) - Save 49% and get 3 extra months FREE with 12-month plan with a 30-day refund offer. It is a powerhouse of VPN features including Lightway Protocol, Split Tunneling, and Network Lock.

ExpressVPN provides installers for almost every device possible. You can use this app on Android, Windows, Mac, iOS, and Linux. Beyond that, you can configure it on FireTV, Roku, Kodi, Apple TV, routers, and other Smart TV systems.

This app can be used on 5 devices simultaneously. Moreover, customer support for ExpressVPN is available 24/7. You can also watch Super Bowl live from anywhere on several devices using this VPN.

Surfshark is a relatively new market player but its top-notch features and powerful performance ranks it among the top-tier seasoned players. Widely known for its affordability, it is the most budget-friendly VPN to watch NASCAR Xfinity Series 2022 live in Australia. With this affordable VPN, you can also watch UCI Cyclo-Cross World Championship live in Australia.

With a price tag of AU$ 3.25/mo (US$ 2.30/mo) - 82% Off on 2 Years Plan, you will get rarely seen features including CleanWeb, Multi-hop, Bypasser, WireGuard, and Camouflage Mode among several others. You can use these features for 30 days absolutely free.

Surfshark offers an extensive network of more than 3200 servers worldwide, including several locations in the USA, the UK, and Canada. Using these servers you can easily watch NASCAR Xfinity Series live in Australia.

This VPN also unblocks many streaming platforms like Peacock TV, ESPN, Amazon Prime, Hulu, and Netflix. You can also watch FIBA Intercontinental Cup 2022 in Australia without buffering issues or latency.

This VPN offers dedicated apps for Windows, Mac, iOS, Android, and Linux, as well as Streaming Devices and Routers. You can use Surfshark on unlimited devices at a time.

NordVPN is a reputable name in the industry and is widely known for its secured and fast servers. Its network size is huge and offers almost 5500+ servers located in more than 60 countries. It is the largest server network VPN to Watch NASCAR Xfinity Series 2022 live in Australia. Furthermore, you can also watch NFL Pro Bowl in Australia.

You get unlimited bandwidth with NordVPN and that’s evident from its remarkable downloading speed of 86.56 Mbps and uploading speed of 44.07 Mbps, tested on a 100 Mbps server.

NordVPN offers cross-platform compatibility and can be used on devices running on Windows, Android, Mac, iOS, and Linux.

Not just that, you can also use it on FireTV, Roku, Apple TV, Game Consoles, Smart TVs, and Routers. It offers 6 multi-logins per subscription. You can also use this VPN to watch UFC live from anywhere.

This app boasts a remarkable list of features including Dedicated IP, Split Tunneling, and Obfuscated Servers to name a few. These features ensure an ultimate streaming experience.

Why Do You Need a VPN to Watch NASCAR Xfinity Series 2022 Live?

You must be scratching your head over this vexing question: why do you need a VPN to watch NASCAR Xfinity Series 2022 live? Well, due to licensing reasons, the broadcasting channels are required to impose geo-restrictions. That means you can’t access them out of their area of coverage.

If you try to access Fox Sports in Australia you will see the following error:

“The video you’re attempting to view is not available in your region.”

That’s where a premium VPN app, like our recommended ExpressVPN, comes into play. With the help of a VPN, you can change your location by obtaining an IP address provided on a server located in the area of your desired broadcaster’s coverage. By doing so, you can easily access the particular channel of your choice and watch NASCAR Xfinity Series 2022 live in Australia.

A VPN masks your original IP address and provides you with the one that lets you unlock the streaming platform while keeping your identity protected.

What is NASCAR Xfinity Series 2022 About?

NASCAR’s Xfinity Series (NXS) is a stock car racing series arranged in the United States by NASCAR. It is promoted and known as the “minor league” tour of NASCAR. The Xfinity Series of NASCAR is considered a decisive testing ground for the drivers who want to step up a level making their way to NASCAR’s Cup Series, the top-level game of the organization.

NASCAR Xfinity Series events are normally held a day prior to the Cup Series event, which is mostly scheduled for that weekend, as an assisting race.

The NASCAR Xfinity Series 2022 will be kicking off this February 19, see the complete racing and teams’ info down in the article.

The NASCAR Xfinity Series drivers for the year 2022 have been announced. There will be a total of 45 drivers participating in the NASCAR Xfinity 2022. See the list of drivers below for all the relevant info about them along with their teams.

If you are looking forward to watching a specific race or the whole competition of the 2022 NASCAR Xfinity Series, here is the schedule of all the races with complete information about them. Follow the table to find out all the details about the NASCAR Xfinity schedule:

Trevor Bayne will drive the 18 Xfinity car in 2022 for the team Joe Gibbs Racing. Last season, 2021 the car 18 was driven by Daniel Hemric.

The No. 22 Xfinity car will not be on the tracks in 2022 as per the teams and drivers’ press release.

Who is driving for JR Motorsports in 2022?

JR Motorsports has released some crucial information ahead of the 2022 NASCAR Xfinity Series season. Sam Mayer will drive the No. 1 entry in his first full-time season, according to the organization. JRM announced the news quietly in a press release about a different driver.

How much does a NASCAR Xfinity car cost?

NASCAR Xfinity racing cars are a bit expensive. The average cost you can expect for a built-up automobile ranges from $200,000 to $400,000.

How much does NASCAR driver make per race?

The earnings, the drivers of NASCAR make per race may vary on the basis of their position in the race. Usually, on average, the winning driver gets $47,500 per race, meanwhile, the loser makes around $8,500.

Who drives the Shell car in Nascar?

Joey Logano is behind the wheel of the shell car. 24th of October, 2016. Joey Logano and the No. 22 Shell-Pennzoil Ford Fusion race team won the Hellmann’s 500 at Talladega Superspeedway for the second consecutive season on Sunday afternoon.

Who is on Team Penske NASCAR?

Rusty Wallace, Kurt Busch, Ryan Newman, Sam Hornish Jr., and Brad Keselowski are among the notable drivers that have raced under the Penske brand.

NASCAR Xfinity Series 2022 marks the 41st season of the Xfinity Series. It is run as a “minor league” circuit of NASCAR. This series serves as a proving ground for drivers who aim to compete in NASCAR’s top-level competition, the NASCAR Cup Series.

The defending champion Daniel Hemric will enter the season with the hope to win the second title on the trot. Last season, he drove the No. 18 car for Joe Gibbs Racing, however, he is returning with the No. 11 car for Kaulig Racing this season.

NASCAR fans from around the globe are waiting anxiously to watch NASCAR Xfinity Series 2022, which starts on February 19, 2022. As most of the broadcasting channels are from the USA, Canada, and the UK, you might face difficulties accessing these channels due to geo-restrictions.

The only way to access the live stream of these channels in Australia is through a VPN app. As always we highly recommend you to opt-in for ExpressVPN for an excellent streaming experience.