Drake Will Presents Rolex Watches as Gifts to UFC Fighters McCann and Pimblett After $3.7 Million Win 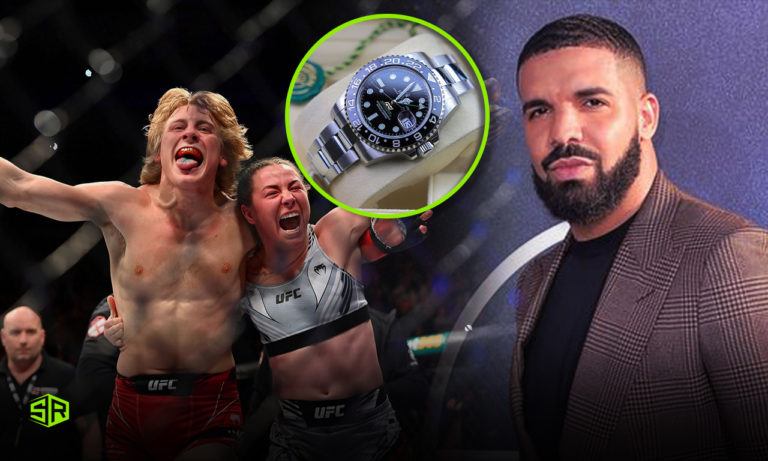 Rap Star Drake will be gifting Rolex watches as promised to athletes Molly McCann and Paddy Pimblett after they won their respective matches which ended up earning him a whopping $3.7 million payout through successful bets.

McCann and Pimblett are the two rising stars of MMA in the UK, courtesy of their keen fanbases and sweeping victories in the UFC.

The UFC showcased shows in London for a “Fight Night” event on Saturday, and both McCann and Pimblett performed supremely well.

McCann got to defeat Hannah Goldy by delivering a savage spinning back elbow along with terrific follow-up punches, in the very first round of their flyweight fight broadcasted from the 02 Arena on ESPN+.

Watch as Molly McCann gets announced as the winner of the first round:

"Have you ever seen lightning strike twice?" ⚡️

Two fights later, Pimblett gets the upper hand on Jordan Leavitt with a rear-naked choke in the second round.

With both the stars ending their fights in a conclusive way, the UFC granted them with a “Performance of the Night” bonus check worth $50,000.

Apart from Pimblett and McCann, Jonathan Pearce and Nikita Krylov also walked away with an additional 50 grand:

No doubt about it 👏

But it seems the winning duo will be getting their hands on more as once Drake fulfills his promise of awarding the two with luxury watches.

Drake placed a bet of a bit more than $2.2 million on Pimblett and McCann to be victorious.

Given they delivered their part accordingly, Drake earned an amazing $3.7 million in return through his awfully successful bet. With McCann aware of the bet, she sent Drake a message on Instagram requesting her due Rolex.

Rollies for Meatball and the Baddy. Secured the W [win] and the rollie.

Elaborating, McCann said in her post-fight interview on ESPN,

Drake is buying me and Paddy a new Rollie.

Whereas Pimblett became a part of the conversation by stating,

Molly over here sends him a video right after and asked for watches, and he said he’s going to give us both a Rolex. We’re swimming in it.

After bagging the six-figure win, a Rolex or two would hardly make a dent in Drake’s pocket. A Rolex watch is typically priced at $7,000 – $12,000, according to Wrist Advisor. However, if the watches include customization, materials, or other perks, the price can easily go over $100,000.

Drake doesn’t only wager on MMA fights. In fact, he participates in all sorts of sports-related betting. Just last February, the man walked away with yet another six-figure win as he bet on the Super Bowl.

On his Instagram, the rap star shared how he placed $1.26 million in Bitcoin favoring the Rams. He bet $470,000 that the Rams would be winning the Super Bowl; meanwhile, he placed another bet for $390,000 that Odell Beckham Jr. would have 62.5 receiving yards. That’s not all, though. He even went on to predict that the wide receiver would get a touchdown and bet $399,000.

That night the Rams weren’t the only winner. Drake won it big by making $1.55 million through his bet earning him nearly $300,000 in profit.

In May, Drake ended up with an even crazier win after he bet $400,000 that the first round of NHL playoff series would last for seven games. The guy earned nearly $1.2 million from the bet.

UFC Fight Night is available on ESPN+. In case you live in UK, you can also watch UFC X Live on ESPN right here. If you’re a sports fanatic you can absolutely not miss the NHL entry draft or the Super Bowl from anywhere.