Disney Plus Chromecast- How to Watch Disney on Chromecast 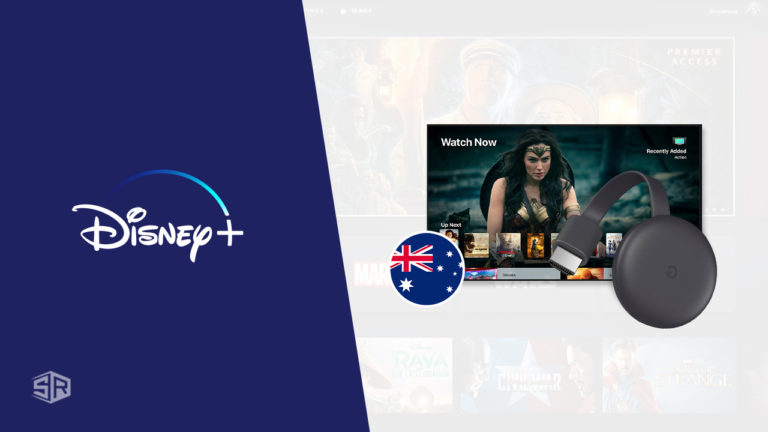 We have come up with the most asked question that is how to Chromecast Disney Plus? Well in this blog we will discuss easy steps that help you with the process of Disney Plus Chromecast.

Disney+ is an excellent source of entertainment for both adults and kids. You can watch all kinds of Disney+ content, including Marvel superheroes, classic fairytales, and kid stories like Mary Poppins anywhere. You may not have access to a smart TV when you are traveling, and that’s where a Chromecast device comes in handy to watch Disney Plus.

Chromecast is a Google device that lets you stream content on any non-smart device, including regular TV, laptops, etc. With Chromecast, you can stream from major platforms like Disney+, Hulu, Netflix, YouTube, and many more. You can cast content from these platforms to your TV and watch it from the comfort of your bed.

How to watch Disney Plus on Chromecast in Australia

To watch Disney Plus Chromecast, follow these steps below:

Let’s look at ways to cast Disney Plus Chromecast from different devices.

All android devices support Disney Plus Chromecast. When you open the Disney+ app you can see the Chromecast icon on the top right corner of the tab. Click on the cast icon; it will show a pop-up window including a list of nearby devices that you can cast Disney Plus on, e.g., TV, Desktop, etc.

Chromecast works across different platforms, including iPhones and iPads. Just like the android devices, the Chromecast icon will appear on the top right corner of Disney+. When you click the icon, it will show you a list of devices that you can cast to. Choose your desired device and enjoy Disney+ anywhere.

Casting Disney+ from the Web

If you are using your laptop or desktop, you can easily Chromecast Disney Plus from the web. To do that, install Google Chrome Browser and login to Disney Plus. Select your favorite movie, click on the Chromecast icon on the top right corner. Now, select the device you want to mirror to and watch your desired Disney+ content anytime. Or, you can click on the 3 dots on the top right corner and select cast from the dropdown. It will open a window from where you can choose your device.

Disney Plus is only available in some countries, including the US, Canada, the Netherlands, Japan, Indonesia, etc. So, if you want to Chromecast Disney Plus from anywhere else, you need to have the best VPNs for Disney Plus. Through a VPN, you can easily watch Disney Plus with Chromecast anywhere, anytime. You need to set up a virtual VPN and VPN router.

Follow these steps to set up a virtual VPN for Chromecast and watch Disney Plus on the go:

Best VPNs for Disney Plus Chromecast in Australia

When you are choosing a VPN for watching Disney Plus on Chromecast in Australia, make sure it can bypass the geo-restriction filters of Disney Plus and offer online privacy. Here are 3 VPNs that are tested and work perfectly fine with Disney Plus.

1. ExpressVPN -Recommended VPN for Disney Plus Chromecast in Australia

ExpressVPN is the best VPN for Disney Plus Chromecast. It is the fastest VPN, with over 3000+ servers all across the world and 25 server locations in US. So, you can choose any fast server from the VPN list and enjoy your favorite shows on Disney+.

Without a doubt, this option has one of the fastest streaming speeds; in a 100 Mbps internet speed connection, you can experience a download speed of 87.18 Mbps and an upload speed of 52.13 Mbps. With this amazing speed, you can also watch Voot in Australia

It features some of the best security protocols and excellent unblocking capabilities and can easily bypass Disney Plus’s geo-restriction blocks. It also allows 5 simultaneous connections under one single subscription. Despite being slightly more expensive in the VPN industry, it is one of the best options and also comes with a 30-day money-back guarantee.

2. Surfshark – Budget-friendly VPN for Disney Plus Chromecast in Australia

Surfshark is a reliable and the most budget-friendly VPN for Chromecast Disney Plus in Australia. It has around 3200+ servers and 600 server in the US. This means, you can choose your desired server and connect to Disney+ within seconds. It also comes with top-notch security protocols, including split tunneling and automatic Wi-Fi protection.

Surfshark has a competitive download speed of 86.51 Mbps and an upload speed of 51.86 Mbps in a 100 Mbps internet connection. You can also use this VPN to watch Vudu in Australia.

This VPN provider has speed servers for seamless Disney+ streaming. It is also compatible with Chromecast and other major devices. It also offers unlimited device connections simultaneously and is also one of the cheapest options among other VPN services. There is also a 30-day money-back guarantee.

This VPN can also be used to watch Sky Sports in Australia.

NordVPN is another most reliable and fast VPN in the market for Chromecast Disney Plus in Australia. It has around 5543+ servers in 94+ countries, and 1970+ servers in 15 US location making it excellent for streaming Disney+ on Chromecast.

NordVPN has the biggest server count among other VPN services, which means you can choose any server in the Disney+ location and enjoy it anywhere you want. You can also use this VPN to watch NBC in Australia

This VPN service features excellent security and unblocking capabilities, offering unrestricted access to Disney+ and other streaming platforms. It also allows up to 10 device connections at the same time. It offers a 7-day trial and a 30-day money-back guarantee during which you can test the VPN service yourself and make a decision.

You can use this VPN to watch other streaming services like BFI Player in Australia.

Some Common Chromecast Issues on Disney+

Chromecast offers fantastic experiences and ultimate entertainment, but Chromecast users have reported few issues in the past. For example, the most common issue is that when you pause a movie or video midway and start watching it again, it might start from the beginning. The glitch has been solved, but the video does get cropped at times, making it harder to pick up where you left off.

Another Chromecast bug on Disney+ was no sound. When the users played the video, there was no sound. This issue could be due to several reasons like not having the latest software or app of Disney Plus or some issue in the app itself. This issue can be solved by reinstalling the app and keeping Chromecast and Disney+ up to date.

Similarly, when it comes to 4K streaming, you need to ensure your 4K TV supports HDCP 2.2. Also, in order to watch Disney+ in HDR or 4K, both your Chromecast device and TV needs to support Dolby Vision; otherwise, it will not enable 4K streaming.

How to cast Disney Plus without Chromecast?

There are several ways to cast Disney Plus without Chromecast. The Roku Channel Store allows users to add and download channels to their Roku devices. Hundreds of popular channels, like HBO, Netflix, Disney Plus, Hulu, Amazon Prime Video, and others, are available. After you’ve installed a channel, casting any content to your TV is simple.

Some of the most common ways for casting Disney Plus without Chromecast are as follows:

What can I Watch on Disney Plus?

Now, at this point, you are familiar with how to Chromecast Disney Plus in Australia. Here is a list of the best Disney Plus content that you can watch using Chromecast.

Here are some of the best movies that you can watch on Disney Plus:

Here is the list of best shows on Disney Plus:

Does Disney plus work with Chromecast in Australia?

How do I download Disney Plus on Chromecast in Australia?

You don’t have to download Disney+ on Chromecast directly. Download the Disney+ app on your device and sign in using your credentials. To cast your screen, click on the icon on the top right corner and select Chromecast as the device you want to stream on. Choose the movie or show that you want to watch and click play.

What Chromecast devices does Disney plus support?

How do I Chromecast Disney Plus from MacBook?

To Chromecast Disney Plus from MacBook, Open Google Chrome on your Mac and go to www.google.com/chromecast/setup. Now download Google Home for iPhone/iPad from the preferred App Store. Make sure your Chromecast is plugged in, and it will automatically appear in the Google Home app. In Chrome, select View> Cast and then select the file or source you want to broadcast (a media file, your desktop, the tab you have opened). You can now cast your favorite movies and tv shows from MacBook.

Can you Chromecast Disney Plus UK?

Yes, you can Chromecast Disney Plus UK as Disney Plus is compatible with all major devices.

Why is Disney Plus not working on Chromecast?

If Disney Plus is not working on your Chromecast, then go to Settings > Apps > Chromecast built-in > select Clear Cache > select Clear Data. Restart your device after 30 seconds, and it should be working fine now.

Why can’t I cast Disney Plus to my TV in Australia?

If you are having trouble casting Disney Plus to your TV, there might be some issues with the internet connection, so check your connection and make sure your device is connected to the internet. If it doesn’t help, then update your app, or shut down your device, wait for 30 seconds and then restart to solve the issue.

This is everything you need to know about Disney Plus Chromecast in Australia. With these tips and tricks, you can easily cast Disney Plus to your TV and watch your favorite shows like What if…? and Disney insider on the big screen with a premium VPN.

Also, if Disney+ is not available in your region, you can always use a VPN to access your favorite Disney content anywhere in the world. One is never too old for Disney movies, so if you want to watch all the classical Disney characters, you grew up watching, then cast away and go back in time with Disney + original movies this year.