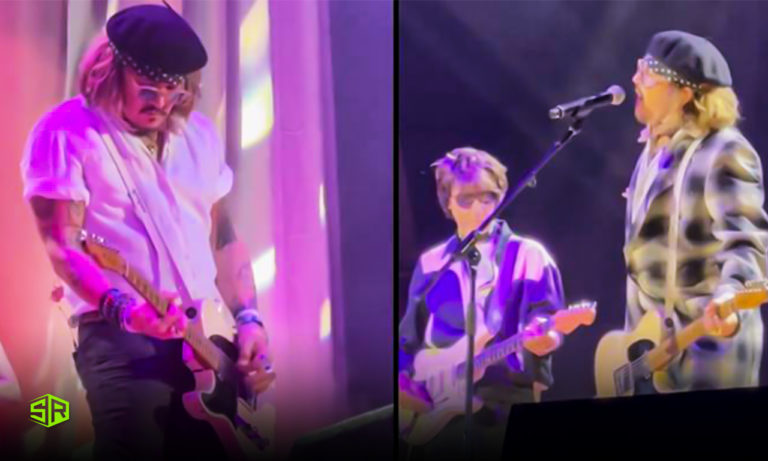 On Sunday, Johnny Depp made a surprise appearance at a Jeff Beck concert and even went on to perform a little for the fans just days after closing arguments are presented in his defamation trial against ex-wife Amber Heard.

The closing arguments were presented by the lawyers of both sides just two days ago in the defamation trial, and Johnny spent his Sunday night serenading fans during a concert.

Various posts and videos are circulating on social media as the actor took the stage to a very surprising crowd of fans at Jeff Beck’s concert on Sunday in England. Depp hit the stage with his guitar and went on to perform with Beck their 2020 collaboration “Isolation” which was a remake of John Lennon’s 1970 song, as per reports.

They also serenaded the audience with covers of Marvin Gaye’s “What’s Going On” and Jimi Hendrix’s “Little Wing.”

Watch videos of Depp performing with Beck which were posted on YouTube:

@deppressead applauded Depp as he came out to surprise fans just days after the trial ended:

Johnny Depp’s now back doing what he loves the most ! Few days after end of the trial, he’s on stage with Jeff Beck singing « isolation »

« Victim of the insane.. » pic.twitter.com/kiD2AO6QbV

In a tweet @LuisaMora1967 shared her sentiments with the rest of the world:

Tonight I am capable of bursting with joy. It's a great emotion to be listening to parts of the Johnny Depp Concert plus Jeff Beck. Too good.#JohnnyDeppIsInnocent pic.twitter.com/XydwLjz84q

Depp’s dream was to become a musician prior to becoming an actor. During his testimony, he specifically mentioned his musical aspirations and how he didn’t have much luck with it, at least as much he wanted, that’s why he eventually turned to acting.

Depp and Heard have been going head-to-head in Fairfax, Virginia since 11th April. The defamation trial ended with Heard’s testimony on May 27th, now the case has gone to the jury for deliberation since Friday. Depp’s suing Heard for $50 million for writing an op-ed about him allegedly in The Washington Post in 2018, while she’s countersuing him for $100 million.

Previously, the world was in shock when Depp revealed he was the one who was a victim of domestic violence at the hands of Heard in their relationship instead of vice versa. Heard’s team had been having a hard time covering up the lies Heard has told.

Given Depp’s psychologist diagnosed Heard to be suffering from “two personality disorders,” things don’t look good for her or her team.

Let us know in the comment section what you think about Depp showing up for his fans days after the trial and whether he has a good chance of winning the case against Heard or not.