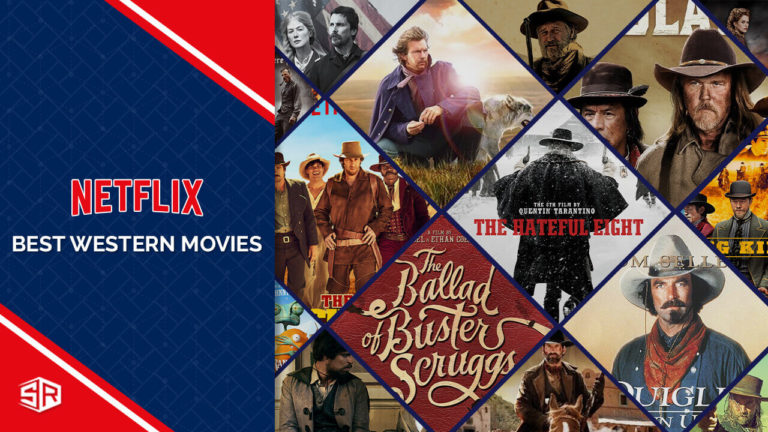 Westerns used to be as popular as superhero films today. Studios used to produce them in large numbers, but somehow, the genre faded in the background. You will see an odd Western here and there, but it is a shame how they aren’t what they used to be anymore.

Thanks to Netflix, you can still see many classics of their time and few new ones that made it to the screen despite the diminishing genre. To help you keep up with the Westerns, we have curated a list of the best western movies on Netflix right now.

Just pick one, and you’d be set for the weekend. 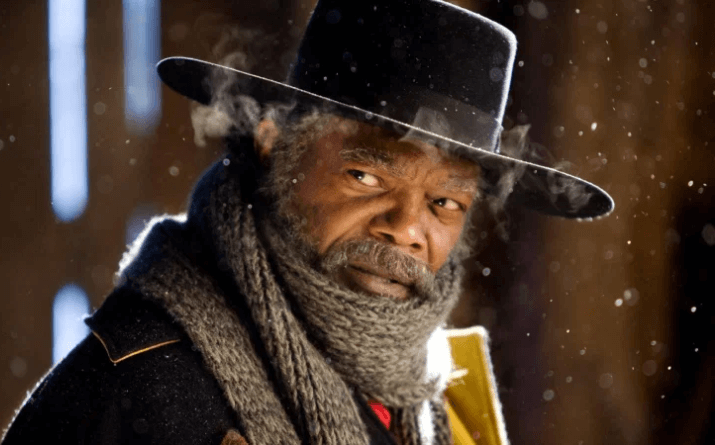 Set in post-Civil War era Wyoming, bounty hunter John “The Hangman” and his fugitive prisoner (Jennifer Jason Leigh) run towards Red Rock. They run into another bounty hunter who claims he is a sheriff. As the storm beckons, the travelers seek refuge at a stagecoach stopover and run into four different strangers. All eight are suspect each other. It’s Tarantino’s eighth movie, and it’s long, expectedly violent, and brutal. The characters are sketchy and colorful. Excellent dialogue delivery makes for an awesome Western flick to watch.

2. The Ballad of Buster Scruggs 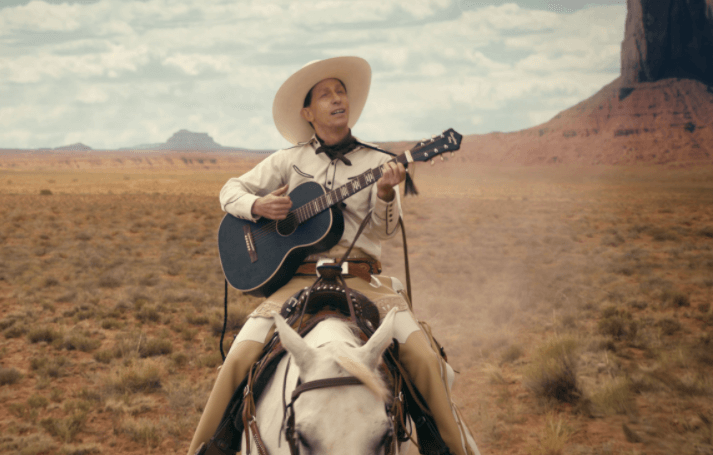 Based on a mixture of ‘All Gold Canyon’ by Jack London and ‘The Girl Who Got Rattled’ by Steward Edward White. The story follows six tales of life and violence in the Old West, centered around a joyful singing gunslinger, a bank robber, a prospector, a wagon train, crazy bounty hunters, and a concert organizer. ‘The Ballad of Buster Scruggs’ is perverse humor, both goofy and highly violent. Among one of the darkest movies by Joel and Ethan Coen, this one leaves the viewer trapped between a laugh and horror. 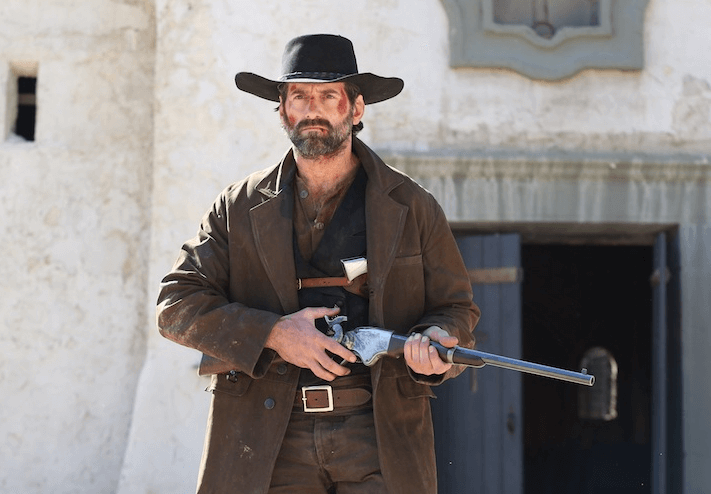 Badland is 2019 American western, and the story follows a Pinkerton detective/gunslinger  Matthais Breecher in the post-Civil War era. He is a hired gun for one of the first African American senators and is ordered to find the worst law breaching Confederate war criminals. He travels all the ‘badlands’ west seeking justice until he meets a woman who is more than what she seems. This Western was not your typical cowboy flick but transcended the line of Old West racism. 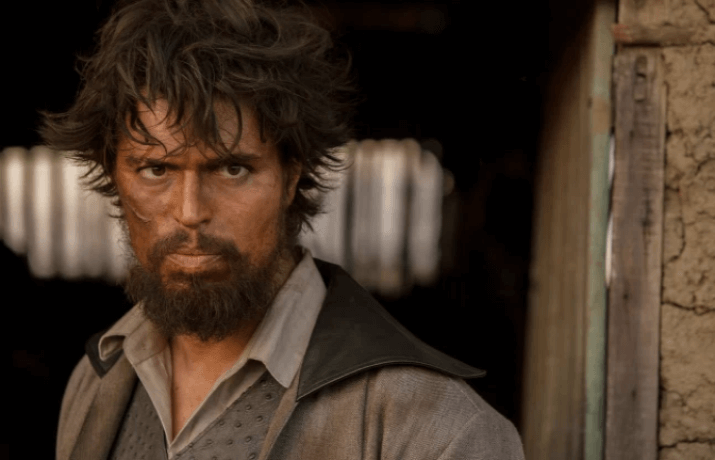 This is one of Netflix’s international projects, which was heavily Brazilian-based—originally titled the ‘O Matador’ its a story about Cabeleira, a feared mercenary living in the lawless desert of Pernambuco, Brazil. Seven Ears, a gunman, raised him. He grew up in isolation but was happy. Then his father disappears when he was a child, and now as an adult, he sets out to find him. He runs into the stone trade, and things get complicated when he learns he has a son too. The film has earned critics’ praise and was revered by a global audience. 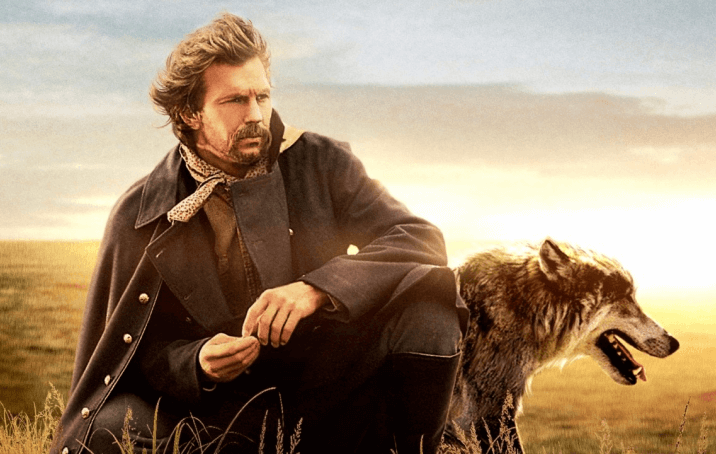 A classic of its time. The film is an adaptation of a 1988 book by Michael Blake of the same name. The story follows Union Army Lieutenant John J. Dunbar (Kevin Costner), who goes to the American frontier for his military post to deal with a group of Lakota. There he develops a relationship with the Lakota Indian and chooses to leave his former lifestyle for more straightforward ways of the Lakota people. He falls in love with a white woman who was raised by the tribe. The tribe names him ‘Dances with the Wolves’ as they welcome him to his tribe. Things go south when Union soldiers arrive to take over the land. 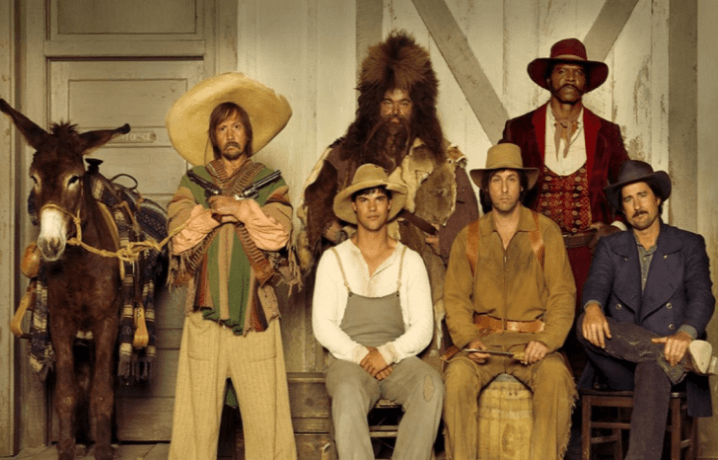 An over-the-top comedy western made by Happy Madison studios will make you laugh out loud every time. The film is about ‘White Knife’ raised by the Native Americans and always thought he was an orphan. Soon he discovers that five outlaws are his half-brothers. All of them together set out to find their lost father.  There are some hilarious one-liners, and the characters are outright funny—a good watch with friends. 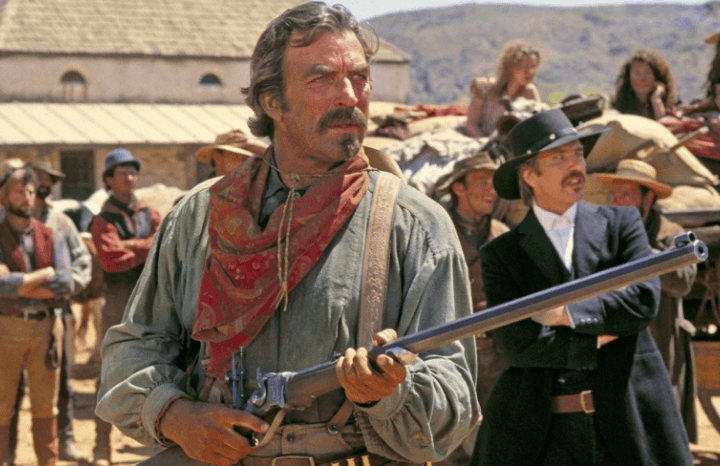 Another 90s Western classic, the film follows Matthew Quigley (Tom Selleck), a long-range sharpshooter who uses a specially modified rifle. He travels Australia outback when he sees an ad seeking a sharpshooter. Things don’t go as planned. When he meets his employers, he is asked to hunt down Aborigines, at which he is horrified. A fight ensues, and Quigley is abandoned to remote outback areas with a local crazy woman. They are rescued by the Aborigines, and revenge follows. 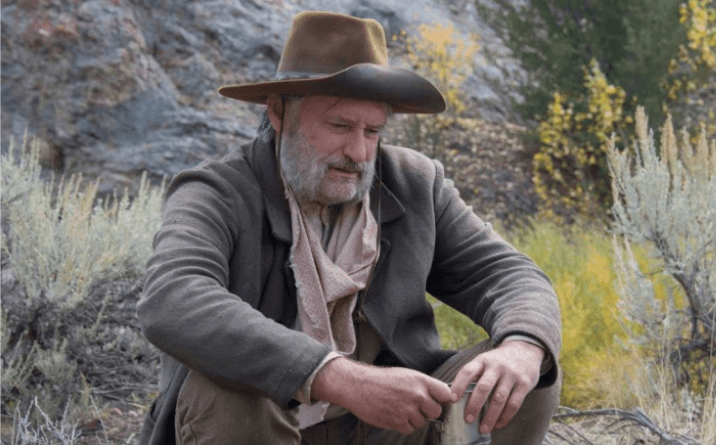 Part Western, part revenge – a masterpiece of storytelling. The film follows a merciless cowboy (Bill Pullman) who sets out to the frontier to seek revenge for his partner’s brutal murder and will do anything to complete his mission. The movie is not your typical shiny bells and whistles kind of Cowboy flick but more mature and depicts the beauty of Montana well. 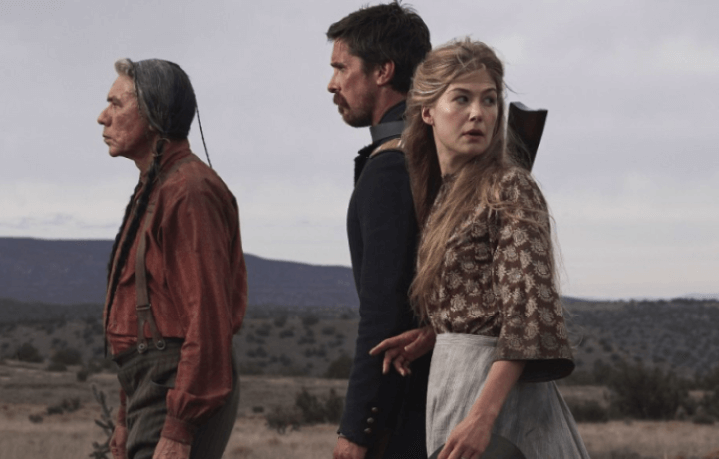 It’s 1892, and Army Captain Joseph Blocker has to escort a dying Cheyenne war chief back to his tribe. On their journey, they run into a young widow whose family was murdered on the plains. Now together, they have to cross the unforgiving landscape and work to defend themselves from the outlaws and vicious attackers. Christian Bale and Rosamund Pike do justice to their characters, and the movie makes a beautiful watch. 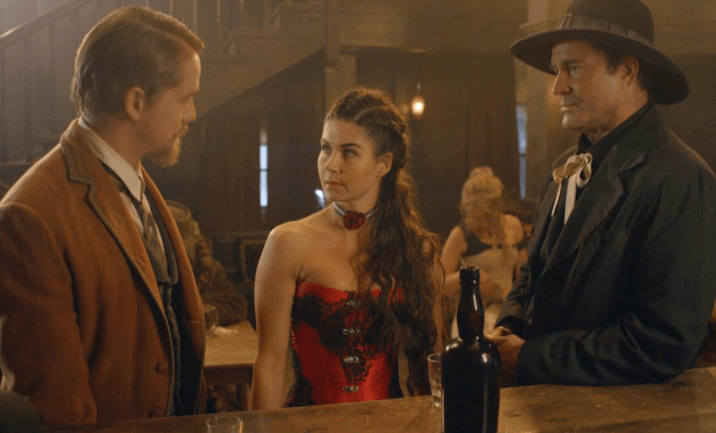 A tenderfoot from Philadelphia, two misfit gamblers on the run and a deadly preacher have a date with destiny in a boomtown gone bust in the Old West. A good bit of humor mixed in with the classic good vs evil in the old west. Well worth a watch. The characters were memorable and the story line believable. It had just the right mixture of tragedy and comedy. cott Martin’s Big Kill tells the story of Jim (Christoph Sanders), an accountant who works in 19th-century Philadelphia. After his brother writes to him about the wonders of life in the titular Arizona town, Jim decides to travel west to join him; along the way, he also befriends two vagrant gunmen named Jake (Scott Martin) and Travis (Clint Hummel). Upon arriving at Big Kill, however, the three of them discover that Jim’s brother is nowhere to be found—and that the townspeople are all caught in the grip of a sadistic killer named “the Preacher” (Jason Patric).

It’s a classic good vs. evil plot with some sprinkling of humor. The film follows an accountant, Jim from Philadelphia, and two vagrant gamblers on the run who meet on their way to a dying town in Old West. Jim came here seeking his brother, but the brother is nowhere to be found. The town folks seem to be controlled by a sadistic killer called ‘The Preacher.’ The story is believable and is the right mix of comedy and tragedy. 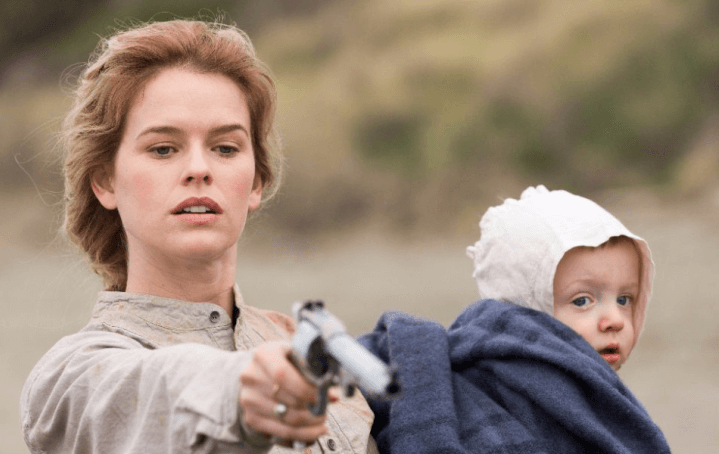 Westerns are heavily male-dominated, but this one is from a woman’s perspective. The film follows a woman who hopes for a promising future. These hopes are sadly cut short when her baby boy is kidnapped. The woman, Charlotte Lockton, then travels New Zealand’s wilderness to search for her boy. The movie is a good attempt at female representation in Western films, and the female protagonist in ‘The Stolen’ delivers. 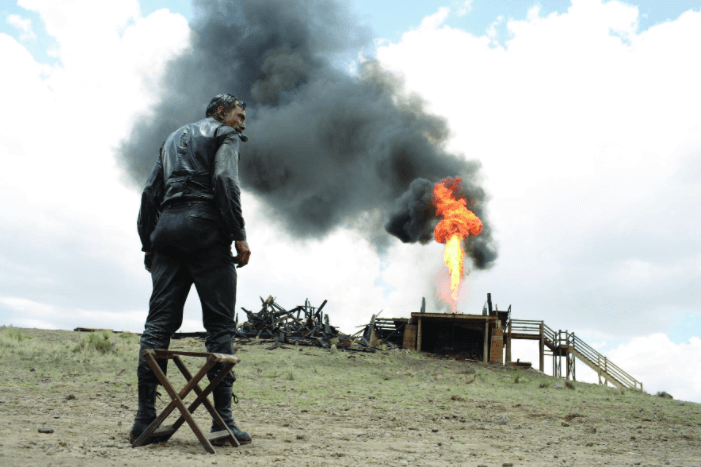 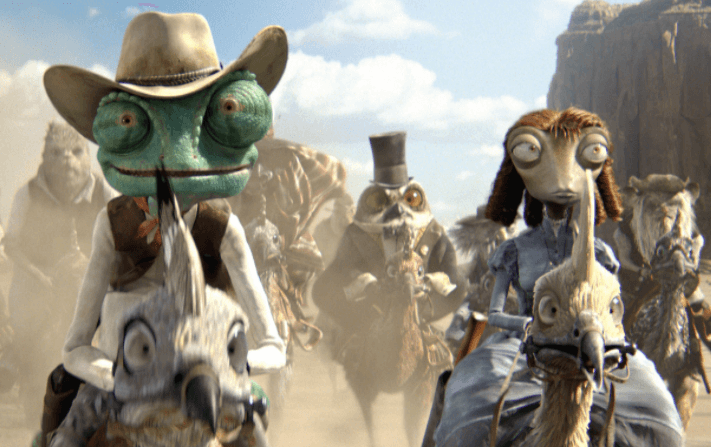 Wondering what an animated flick is doing in this list? Well, you’d be surprised how Rango checks all the boxes for a good Western. The story follows a chameleon (Johnny Depp) who has lived as a sheltered family pet and now faces an identity crisis. Rango wonders how to stand out when by nature, he was made to blend in. When he accidentally winds up in a frontier town called Dirt, he becomes the town’s sheriff, and lots of funny situations follow, and Rango has to solve the town’s dirty water problem. It is a homage to Western movies and quite an underrated gem.

Did you ever catch one of these on Netflix? All of these are a must watch. Westerns make for the perfect weekend if you are super over the soapy stuff. Any of your favorite Westerns that didn’t make the list? Drop your comments below to let us know.