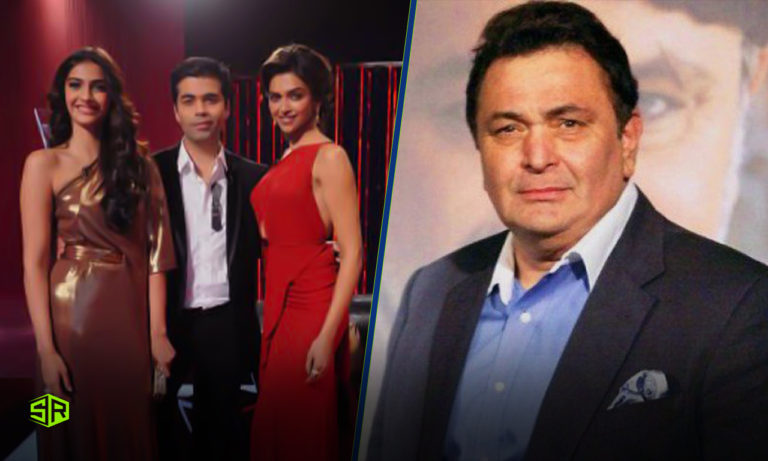 Karan Johar returns once more with the seventh season of his controversial talk show Koffee with Karan. He has sparked millions of debates across the country over the topic of nepotism and also landed plenty of celebrities in hot water due to their carefree comments.

There’s no denying everyone loves good celebrity gossip. Despite sparking controversies and scandals, the show has been a fan favorite. Filmmaker Karan Johar himself admitted at times, he’d had to step up to do damage control as a result of the heated debates.

KJo himself shared on his Instagram how the Koffee With Karan Season 7 premiere episode received the highest Day 1 viewership on Disney+ Hotstar. He also invited everyone else who hasn’t watched the episode to catch up on it ASAP.

Johar recalled an episode of Koffee With Karan Season 3 in which he had invited Sonam Kapoor and Deepika Padukone as his guests. The two actresses passed a comment about Ranbir Kapoor which the late actor Rishi Kapoor found highly distasteful as he believed they insulted his son.

Many times, it has happened that I had to step in to douse the fire after rapid-fire. I remember when Sonam Kapoor and Deepika Padukone came to the show and spoke whatever they had to, Chintu ji (Rishi Kapoor) was very upset. I had to step in to make things alright. I have shows banned and taken off air, which I felt terrible for.

The episode that aired in 2010 featuring Sonam Kapoor and Deepika Padukone, included the two ladies taking several digs at Ranbir. Upon being asked from Deepika what she would like to gift Ranbir, the lady answered, “A box of condoms.” Followed by when she was asked what advice she’d like to impart to him, she said he should endorse condom brands.

The two had broken up just recently after dating for over two years. Whereas Sonam commented how she wasn’t sure if Ranbir would make a good boyfriend. Both of them implied that Ranbir had been unfaithful.

Catch a glimpse of Sonam Kapoor and Deepika talking about Ranbir right here:

While talking to Hrishikesh Kannan in an interview, Karan admitted that the two ladies may have overstated things. He said:

I remember when Sonam and Deepika came together many seasons ago, I had a feeling ‘oops’ they’ve overstated things and I have also allowed it. I had a feeling about that, but now with time, we are all being extra careful.

When Rishi Kapoor was asked what he thought of Deepika and Sonam’s comments about Ranbir in the rapid-fire round, the veteran actor wasn’t pleased in the least. He instead advised the two ladies to focus on their careers.

KJo also admitted that at times he’d edited out certain comments by celebrities on his show to avoid unleashing a tsunami of sorts in the industry.

Many times actors have called me directly requesting to cut something that they have said as a slip of tongue. I have done this because for me relationships come before everything.

The first episode of Koffee with Karan Season 7 featured celebrities, Alia Bhatt and Ranveer Singh. The two dished out details about a number of topics from talking about exes, in-laws, suhagraat, and also film shoots. The duo kept the audience entertained throughout the show and even made plenty of headlines.

Koffee with Karan Season 7 is now streaming on Disney+ Hotstar. The first episode premiered last week. In the second episode of the show, Jhanvi Kapoor and Sara Ali Khan will be appearing as guests. The episode is all set to air today.

Those living in the US or not being able to catch Disney+ Hotstar for any other reason, here’s how you can enjoy watching Koffee with Karan’s latest episodes.