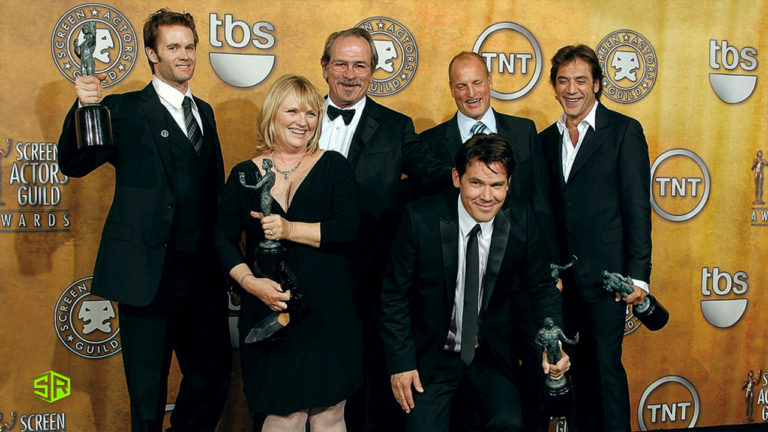 The Coen Brothers’ neo-Western crime thriller garnered SAG honors for its ensemble cast and Javier Bardem in a supporting role.

Ethan Coen and Joel Coen are renowned for putting together high-caliber casts for their movies, and No Country for Old Men that came out in 2007 was no exception either.

The film, based on the novel by Cormac McCarthy, featured Josh Brolin, Javier Bardem, Woody Harrelson, Garret Dillahunt, Tommy Lee Jones, Kelly Macdonald, and Tess Harper in a neo-Western thriller about a messed up drug deal.

While taking notice in 2008, The Screen Actors Guild awarded No Country for Old Men the award for exceptional cast in a motion picture, besides the best supporting actor for Javier Bardem.

Brolin, who was included in the 47-person cast, heaped praise for the independent film as being “a risky movie, and it’s nice to have risky movies now” because “the studio system is backfiring.” Harrelson also pinged in with his appreciation for the directors, instigating Brolin to jest, “The Coen brothers are freaky little people, you know? And we did a freaky little movie, whether you like the ending or not.”

*Spoiler Alert!* The controversial ending showed Llewelyn Moss (played by Brolin) and his wife, Carla Jean (played by Kelly Macdonald), being killed by the hitman Anton Chigurh (played by Bardem), with the villain fleeing with a bag of cash. In contrast, Sheriff Bell (played by Jones) has two vague dreams before the screen cuts to black.

No Country for Old Men eventually earned eight Academy Awards nominations and ended up with four wins, including Best Picture, Actor in a Supporting Role for Bardem, and Director and Screenplay awards for Coen brothers, making them the second-ever directing pair and the only siblings to receive the accolade.

After almost 14 years and seven movies, Joel Coen returns alone to the awards conversation with his title “The Tragedy of Macbeth,” which is inspired by the Scottish play he directed and wrote the screenplay for.

All set to premiere on December 25, the A24/Apple TV+ film will feature Denzel Washington and Frances McDormand, Joel’s wife, as the Lord and Lady and makes it the first instance when Joel will be producing a project without his brother Ethan. The duo has collaboratively earned 15 Oscar nominations and grabbed four wins.