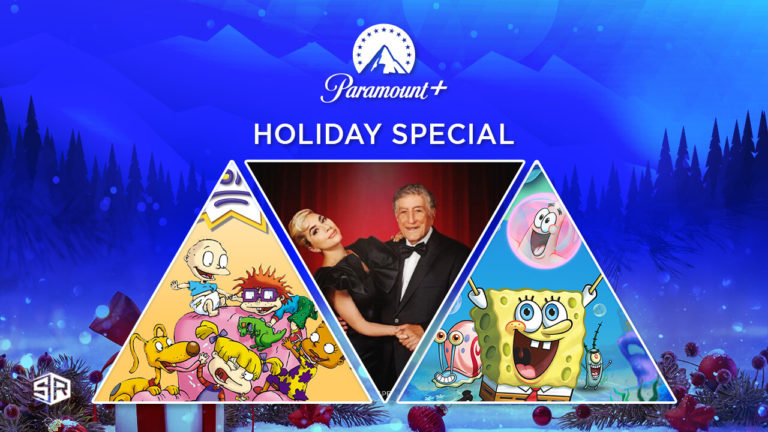 With an impressive lineup of holiday specials, Paramount+ is preparing for the holidays. This holiday fest includes titles for both kids and families, as well as a mix of new and classic movies and shows. CBS will also air live and on-demand holiday movies on the streaming service.

It was originally known as CBS All Access, but the streaming service now known as Paramount+ has quickly established some name recognition with an impressive library of new and classic movies and shows, as well as some top-tier franchises and original projects available nowhere else.

In addition to a number of classic and beloved titles, fans will be able to watch the all-new Rugrats holiday special on the platform. Whether you’re looking for classic episodes of holiday-themed sitcoms, family-friendly programming, or unique entertainment, Paramount+ has you covered in the coming weeks.

How to Watch Paramount Plus outside USA [Quick Steps]

You can watch Paramount Plus outside USA by following the simple steps outlined below:

Starting with specials for children, Paramount+ has planned hours of holiday fun with seasonal episodes from shows such as SpongeBob SquarePants, iCarly, Dora the Explorer, Bubble Guppies, and Peppa Pig, among others. It will also include A Loud House Christmas, a live-action holiday film based on the Nickelodeon Emmy Award-winning animated series.

A new Rugrats episode will premiere on Paramount+ on December 2nd, which is sure to tug at the nostalgic heartstrings. Tommy, whose first Chanukah falls on Christmas Eve, is the focus of the multi-denominational special. The Pickles family must strike a balance between holiday traditions that teach the toddlers about the significance of the holidays and Las Posadas with Betty and her family. Henry Winkler as Boris, Swoosie Kurtz as Minka, Raini Rodrigues as Gabi, and Tata Vega as Tia Esperanza are among the special’s guest stars.

Adults will not be left out of this entertaining fest. Christmas classics like A Christmas Carol, Bridget Jones’ Diary, Serendipity, Happy Christmas, and Surviving Christmas are making their way to the platform just in time for the holidays. A collection of holiday episodes from fan-favorite series such as Frasier, Beverly Hills 90210, Cheers, Everybody Hates Chris, The Brady Bunch, and many more will also be available on the platform.

CBS’s live and on-demand holiday movies and specials will also be available on Paramount+. This includes the must-see event One Last Time: An Evening with Tony Bennett and Lady Gaga, a live-performance concert special honoring the two performers’ friendship and musical legacy. A Christmas Proposal, starring Jessica Camacho as a down-on-her-luck chef who agrees to pose as the girlfriend of an attorney (Adam Rodriguez) for the holidays, and Christmas Takes Flight, starring Katie Lowes as a strong-willed pilot and Evan Williams as the CEO who buys her family’s airline company, is also included.

This wide range of holiday fun is available to audiences through Paramount+’s Black Friday deal, which offers new customers one month free with the code PEAKSALE. Customers who subscribe gain access to the previously mentioned holiday specials, as well as original series, movies, and live sports.

Also Read: How do I cancel Paramount Plus subscription

SpongeBob SquarePants, Happy Christmas, and other popular kids and family films have been released by Paramount+, so you don’t have to worry about anything. Isn’t it fantastic? Watch the movies on the Christmas holidays and tell us what you think in the comments section.

Happy streaming in the Holidays!

You can also read our guide for Paramount Plus price plans