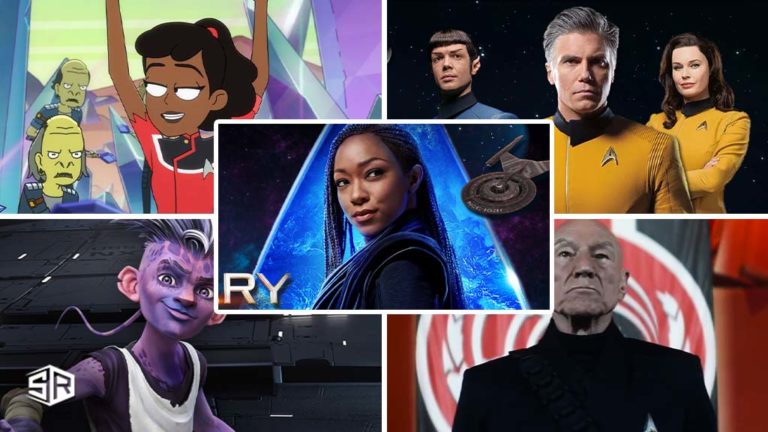 Star Trek Universe, Paramount’s sci-fi franchise, is taking a big turn up in its lines. The streaming service, ViacomCBS, has confirmed many 10-episode-long season pickup orders that will be happening in the sci-fi franchise along with the release dates.

Which Star Trek Shows are Airing in 2022?

There is a total of five separate Star Trek series set to air their new seasons in 2022. See the list below:

Just to let you know, in the history of Star Trek, prior to this year, something similar has never occurred before, and except Marvel, you might not be able to find any other mega science-fiction or fantasy franchises that are managing to release so much new material in just one year.

Perhaps, the Star Trek franchise is the pioneer of this type of diversity when back in the 1990s they aired titles like The Next Generation with new episodes and on the other hand Deep Space Nine was also released. Star Trek kept its tradition by airing three shows: Lower Decks Season 1, Picard Season 1, and Discovery Season 3 in 2020. But taking it up by a notch and hitting five is a lot.

Star Trek: Prodigy, an animated TV series is presently telecasting new episodes every Thursday through Paramount+ and it will continue airing until its Episode 10 on February 3. The series will take a breather after that, as confirmed by Paramount, and “the additional 10-episode-long second half of season one will be available on Paramount+ later in 2022.”

On February 10, the subsequent week, Season 4 of Star Trek: Discovery will recommence with Episode 8. Optimistically speaking, before the season concludes, the DMA’s source and the advent of Zora will be taken care of. Moreover, the concluding three episodes of the 4th Season of Discovery will excitingly intersect with the debut of the next major Star Trek show. It seems like Episode 13 of Discovery’s 4th Season will broadcast on March 17 going into three weeks of Picard’s new season.

Even though originally scheduled for February 2022, Picard Season 2, much-anticipated by the fans, is set to hit TV screens on 3rd March 2022, snatching the Thursday release spot of Discovery on Paramount+. This will make the initial three Picard Season 2 episodes collide with the Discovery Season 4 schedule of the final three episodes, meaning from 3rd March to 17th March, for three weeks in a row, on the same day two different series of Star Trek will air their respective episodes. The news has also been confirmed by Paramount and CBS representatives.

As revealed by the trailers, the 2nd Season of Picard Season will be based on a time travel story in which the La Sirena and Jean-Luc squad have to return to the 21st Century era to reverse a frightening future. Terry Matalas of 12 Monkeys is the genius behind Picard Season 2, so it’s rational to imagine similar overwhelming enigmas in this series of Star Trek.

It’s been two years since Season 1 concluded as interruptions caused the 2nd Season of Picard to extend its airdate. However, as confirmed by Paramount, 3rd Season of the show is produced with Season 2, side by side. Jonathan Frakes has also confirmed lately to Inverse that he has directed a “block” of episodes for Picard Season 2.

Strange New Worlds at last has been scheduled to release on May 5, 2022. It means that Episode 10 of Picard Season 2 supposedly will air on the same date when the Strange New Worlds will kick off with its series premiere. It also implies that the summer of 2022 will commence with a fresh Star Trek sequence dedicated to the model USS Enterprise.

Henry Alonso Myers and, Akiva Goldsman the co-showrunners of the series have revealed that the Strange New Worlds will show for more periodic than the earlier newer series, which will adopt a little extra classic setup of individual ventures. This new Star Trek show series is simultaneously an adaptation of Discovery and a prelude to The Original Series.

Time traveled and the period has shown of the late 2250s, the series will entail the future ventures of Captain Pike (played by Anson Mount) on USS Enterprise, besides Number One (played by Rebecca Romijn), and Spock (played by Ethan Peck), who all featured back in 2019 on Discovery Season 2.

The show will also disclose new variations of definitive ‘60s Trek roles, which will include Nyota Uhura (Celia Rose Gooding), Nurse Chapel (Jess Bush), and Dr. M’Benga (Babs Olusanmokun). Some new Enterprise team associates such as Christina Chong as La’an Noonein-Singh, Melissa Navia as Lt. Erica Ortegas, and Bruce Horak, as Hemmer, will also be introduced in the series.

It also made it to the news with an announcement that Strange New Worlds has already been renewing the decision and coming up with a Season 2. This is a bit of what Jonathan Frakes revealed to Inverse last year, he said that he will be giving directions for Strange New Worlds episodes this year.

Hey, in all that exhilaration don’t forget the Star Trek: Lower Decks! The hysterical animated comedy of Mike McMahan will make its return with the third season in the summer season of 2022.

There haven’t been any announcements by Paramount and we don’t know the exact release date but looking at the trail record of Lower Decks, we can make a good bet it will be somewhere in August 2022. With Captain Freeman trapped on account of destroying a planet, which she absolutely didn’t blow up, season 2 of the series ended with a cliffhanger. Paramount has also officially confirmed that season 4 of Lower Decks has already been greenlit.

Discovery Season 5 and the Future?

The most recent press announcement from Paramount confirms that Season 5 of Star Trek’s Discovery has been confirmed to be in making. Most probably, this season 5 will make it to our screens in 2023, which also makes things interesting as the next year is also when the Star Trek feature film is supposed to release. When the source Inverse got in a talk with Doug Jones, Discovery actor last year, he said that in his opinion Discovery can at least run for five seasons. Will it make it further than that? Who knows!

The Star Trek franchise executive producer and architect, Alex Kurtzman gave out a statement as well. “Four years ago, we made a promise to grow Star Trek into something it had never been before, and thanks to the incredibly hard work done by our many talented showrunners, writers, and directors, along with the extraordinary support of CBS Studios and Paramount+, we’re keeping our word, Now our current shows are set up for the future as we work to build Trek’s’ next phase of programming for years to come.”

Star Trek fanatics must be beaming with excitement as 2022 is proving to be the biggest frontier for Star Trek ever looking at these 5 major releases. If Trek showrunners keep up the pace they have picked, maybe 2023 as well will be totally jam-packed for Star Trek movies on Hulu. Start binge-watching now!

Let us know in the comments which Star Trek series you are anticipating to watch the most.